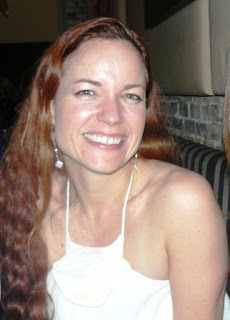 I was emailing with Oxford’s poet laureate, Beth Ann Fennelly, about the good time we had during “Camp Square Books” in Oxford last week, when it struck me that even her emails are like lyric essays, dripping with honey and vibrant with color as the words flow easily through her fingers and onto the keyboard. She had told me (at one of the readings at Off Square Books) about the crazy party she throws for her husband, Tommy, every July, and that she was sorry I had missed it and I said I didn’t know I was invited and (pang pang went my heart with a mix of regret and surprise that she would consider me, well, a friend) she started telling me about it but then the author started the reading so she said she’d email me later. The email was so yummy that I asked her if I could post it on my blog, asking her, in effect, to be a “Guest Blogger.”

She emailed me back with laughter at the thought of me wanting her words for my blog but said “sure, go ahead,” so here it is: a very informal, off-the-cuff email from Beth Ann that puts a new twist on Southern hospitality. Enjoy!

Next year I will remember (I hope) to remind you about Tommy’s b-day party, a big silly party I throw every year for him, and always on the hottest day of the summer. If you remember, email me early July and I can tell you the date. Everyone loves this party and I think it’s because the party is so casual. What Tommy wants is not to have to dress up, all afternoon have outdoorsports and Bud Light Drinking that continues into the wee hours. I don’t go to any fuss besides baking three cakes, all three the same, two layer pink velvet cakes, Tommy’s favorite and a local legend (here you can imagine me blowing on my nails and buffing them on my shirt. . .) No other cooking or fussing much: I get mounds of pulled pork, beans and slaw from B’s BBQ (in a local gas station, but good) and set it up on the table and folks help themselves. People usually come in shifts–students and the young (I remember when I spoke of them, the young, with a first person pronoun) who want to be there when we tap the keg at 4 and play badminton and don’t care how hot it is. Saner folk who arrive at 6 or 7ish, in time for the ‘que. Others who arrive around 10 when the sane folks leave. And then the bartenders and cooks in town who arrive when they get off work at midnight and one p.m., some even later though I went to bed at 1 pm myself feeling sheepish but of course at that point I’d clocked in nearly ten hours of the party.

This year was a particularly good one. Did Doug tell you about the 5 Irish boys that were in Oxford for an overnight during their 7-week, cross country road trip? They were sleeping sometimes in cars or camping out, and wanted to be writers, and, really, they couldn’t have been more adorable. So I invited them to spend the night at our house. (Having accepted so much hospitality that year I lived in the Czech Republic, I feel obliged to pass it on when I can). I left the bar that night around 10 and told the Irish boys, all 21, where we lived and that we’d leave the house open for them to come in and find bed/floor/couch space. At six I woke up with Thomas (“MommyDaddy. . . MommyDaddy. . . ” he calls it over and over until we appear) and saw that they weren’t in the house. I figured they changed their minds. . . turns out they hadn’t even gotten in yet. They found a “late night”–the word here for parties after the bars close—and they repeated the word so often I could tell they were happy to been in on local slang–and one of them had a black eye because he’d gotten into a fight with someone on the topic of “moral authority” (only the Irish get into fisticuffs on philosophy). So I fed them a ginormous breakfast they proclaimed “brilliant” (they ate so much) then they slept and woke up in time for the tapping of the keg. Later at the party they got out guitars and sang Irish ballads, Dylan, and the entire White Album, and I pulled up a chair outside under the pear trees (we’ve strewn them with mardi gras beads) and sang along.The next morning when we got back from church they were gone, and I felt a little unaccountably blue even though I knew they had to head to the Delta. I guess part of me wanted to be 21 and in a car heading across country, and part of me was sad the party was over and wasn’t lookingforward to the rest of the clean up (I’d already picked up the cups and cake plates–but there were plenty of cigarette butts to dig out of my garden, for example).

Anyway, I was rolling up my sleeves when the Irish came back (Dennis, Liam, Brian, Brian, and Brian)–they’d gone out to get me flowers. I was so touched that they’d done that–gone to Kroger and picked me up a little mylar-wrapped $4.99 bouquet, especially knowing how broke they are. . .all four of us stood in the driveway and waved until they were out of sight.