Did you know that AT&T is an acronym for “All That and Then Some”? Seems like it would be AT&TS, doesn’t it?

This I know: the American Telephone and Telegraph (AT&T) Company is NOT all that and then some. Although according to Wiki they are the “largest provider of fixed telephony in the United States, and also provides broadband…” blah blah blah.

About a year ago we were fed up with Comcast so we switched to AT&T and got U-Verse, which we have really enjoyed. But with our move to Harbor Town, we found out AT&T didn’t have U-Verse in that neighborhood yet, so they partnered with Direct TV for television service. No problem. They switched us over and the Direct TV guys came out on Monday and set everything up. Televisions are working fine.

Not true of phone service and internet. My husband spent HOURS on the phone placing the order, about five weeks ago, for our service to be transferred to our new home on January 16.

He received a confirmation letter a couple of weeks later saying everything was set, and our service would begin on February 4, not January 16!

So, he spent another couple of hours on the phone getting them to correct this, which they said they did, confirming our order for January 16. The way it would work would be that our phone service would be turned on that day, and we would receive, by UPS, a DSL modem for our internet.

January 16 came and went and no phone and no modem.

On January 17 we started trying to get back in touch and finally got someone, at the end of the business day, who gave us a different number to call first thing the next day.

First thing January 18 I called the number and they said a company called Hyperion was doing the transfer, and there had been some “error,” but they were correcting it, and we should have phone service by the end of the day, and the modem would ship from Texas overnight, and we’d receive it today, January 19.

But here we are on January 19, still no phone service and no modem.

I was telling a friend about this and he said he had bad service from Comcast once and so he Tweeted bout it and BINGO—Comcast immediately Tweeted back, “what can we do to help?” and they solved his problem right away. 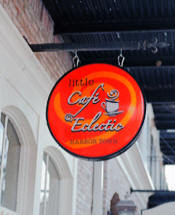 P.S. I’m blogging from my new neighborhood coffee shop, Little Café Eclectic
(Harbor Town, not midtown), which I love. Had delicious soup and sandwich for lunch and now I’m enjoying a cappuccino…. good excuse to leave the house for internet service, right? But it’s time to get back to the boxes….

3 thoughts on “>All That and Then Some”