My friend Jennifer Horne recently told me about a wonderful poet who just released her first volume of poetry—American Happiness. Jacqueline Trimble did graduate work at the University of Alabama with Jennifer (another excellent poet who also writes prose) and Jennifer knew I would love her poems. She was right.

Jacqueline opens the book with these sentences in her preface, “How My Mother Taught Me to Write Poems”:

My mother was a foot soldier in the fight for civil rights, had a cross burned on her lawn, drove students to Lanier, a local high school, to integrate it and was sued along with CBS for comments she made on television. She was unafraid, dignified, and determined.

That’s how I would describe her poetry in this powerful book—unafraid, dignified, and determined. Jacqueline was the only black child the first year in her elementary school in Montgomery, Alabama. On her journey to the successful woman she is today, she experienced the dark underbelly of racism in the South and exposes it with brilliant verse in this collection.

But before we get to the section that deals most directly with racial issues, we are hit squarely in the gut and the heart with her reflections on the death of her mother with “The Day After Her Mother Died” and “Things That Are Lost.” These were particularly powerful for me, since I lost my own mother just five months ago. When she says, “I have lost the sound/of my mother’s voice,” I thought immediately about my own mother’s voice, trying to call it back, which I can still do. I even hear it in my own voice at times.

Jacqueline appeals to all our senses with “Church Women” (I can see, hear, and smell this one) and to our sense of place in “The Geography of Passion.” And she builds a world for her readers in “A Woman Tells the History of Her People” before sending us into the darkest parts of that world in the next section of the book, “American Happiness.”

Perhaps the strongest poem in this section is “The Klan Panhandles for Donations at the Intersection of Court Street and the Southern Bypass.” In my naiveté (although I did grow up in Jackson, Mississippi, in the 1950s and ’60s) I could not have imagined this scene in Tuskegee, Alabama. But I did see a cross burning in a front yard in Jackson once, in 1964. My eighth grade boyfriend’s family had moved to Jackson from somewhere up North. I think his father did something to piss off the Klan, but I never understood what it was. 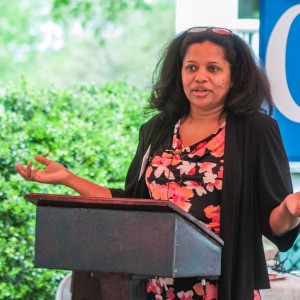 In her title poem for the book, “American Happiness,” Jacqueline juxtaposes the fictional town of Mayberry with the real towns she grew up in. In Mayberry, she says, “folks were never colored/—not even black and white—/but beige, khaki,/a little gray.” The gray fades quickly in her next poem, “How To Survive As a Black Woman Everywhere in America Including the Deep South.”

Jacqueline Allen Trimble is an associate professor of English and chairperson of Languages and Literatures at Alabama State University in Montgomery, Alabama. She is a Cave Canem fellow and the recipient of a 2017 literary arts fellowship from the Alabama State Council on the Arts. American Happiness is her first book. I’m sure it won’t be her last, as we all need to hear more from this brave and gifted writer. As Mark Childress, author of Crazy in Alabama says, “It is cause for celebration that Ms. Trimble is making poetry that is timely and timeless, elegant and brutal, wise and innocent.”

American Happiness is a MUST READ for everyone who grew up in the South, lives in the South, and even for our neighbors in the rest of the country who care about the rights of all people. Of course these issues have been addressed elsewhere, but not with the power of poetry like Jacqueline’s. Write on, Jackie.