>Thanks soooo much to the three wonderful women who sent in guesses for my “first lines” contest, which has been posted for 48 hours now, so I’m ready to announce the winners and move on to something else:

And the winners are:
Keetha Reed guessed #6, which is a good thing since Keetha was also a participant at the recent writers workshop and hopefully had read keynote speaker Joshilyn Jackson‘s best-selling novel, Between, Georgia. 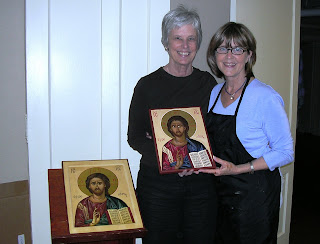 Sissy Yerger guessed #7, and yes, she had a big advantage, since she’s an “early reader” for one of my not-yet-published short stories, “The Ballad of Emily Rose.” Sissy lives in Clinton, Mississippi, where she keeps trying to retire from copyediting and other things she’s so good at. It’s my blessing that she comes to Memphis often to visit her precious grandson, and has taken several of my egg tempera icon classes. (That’s Sissy with me in the photo holding her icon of Christ the Lifegiver.)
Charli Phillips guessed #5, which is a good indicator of the kind of quality stuff Charli reads, since these were first lines from C. S. Lewis’ book ‘Til We Have Faces. (Charli is mother to Patrick, my almost-12-year-old Godson, who was born in Mississippi but now lives near Seattle. Patrick has a dog named KUDZU, which just goes to show you that you can take the boy out of the South, but you can’t take the South out of the boy! Hi, Patrick, and Happy Birthday on the 14th!)
Okay – here’s the complete list of titles and authors:
#1 – Ellen Foster by Kaye Gibbons
#2 – The Prince of Tides by Pat Conroy
#3 – The Mermaid Chair by Sue Monk Kidd
#4 – The Sweet Carolines (a novel in progress) by Susan Cushman
#5 – ‘Til We Have Faces by C. S. Lewis
#6 – Between, Georgia by Joshilyn Jackson
#7 – “The Ballad of Emily Rose” (an unpublished short story) by Susan Cushman
#8 – Middlesex by Jeffrey Eugenides
So … if any of the “first lines” hooked you, now you know where to go to read the rest of the story. (Hopefully #4 and #7 will be available some day!)
Since I mentioned icons earlier, this is a good time to explain a little bit for the unitiated. Icons are images of Christ, His Mother, angels, and saints, traditionally seen in Orthodox Churches all over the world. My church here in Memphis, St. John Orthodox Church, is part of the Antiochian Archdiocese. Icons are sometimes called “windows to Heaven,” because they are holy images that help us see past the here and now into eternity. The process of painting an icon is sometimes called “writing” an icon, because the artist is writing the life of the saint in pictures (iconography) rather than in words (hagiography.) (Click on any of the underlined words in this paragraph to read more.)

It’s a joy to have three of my icon students painting with me in my studio all day today and tomorrow. Laura, Kathy and Charles – I’ll put the coffee pot on first thing in the morning! For more information about commissioning an icon or taking a class, just send me an email at susanmaryecushman@yahoo.com. 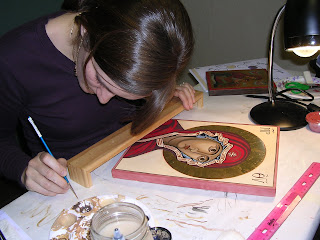 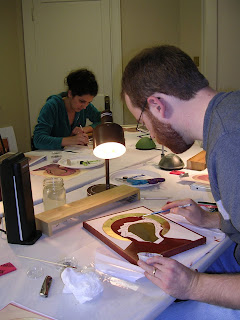 work on icons at one of my recent workshops at St. John.

Thanks for stopping by – please leave a comment before you go!