>Growing up in Mississippi in the 50s and 60s, I was privy to lots of colloquialisms. Some from Lillie Bell, the dear black woman who helped raise me from birth until I was a teenager. And from grandmothers and great aunts from rural parts, especially. It wasn’t until recently that I began to consider the root of some of those terms. Like this one: “She was just beside herself.” Which usually meant a person was upset. Out of their mind with worry about something.

I found that very expression in an unexpected place this morning─a short book by Metropolitan Anthony Bloom called Meditations on a Theme. I’ve quoted from Met. Bloom’s work before. From one of his books on prayer. A physician and priest, he was Exarch of the Russian Orthodox Church in Europe at his death in August of 2003. Anyway, I often turn to his writing when I am “beside myself” over something. Or in this case, when a dear friend is “beside herself” with worry about something really hard that has happened to her family. How surprised I was to find this very phrase used in Met. Anthony’s words:

We are encompassed on all sides by worries, concerns, fears and desires and so inwardly perturbed that we hardly ever live within ourselves─we live beside ourselves. We are so much in a state of befuddlement that it takes either acts of God or a deliberate discipline to come to our senses and begin that inward journey which will lead us through ourselves to God Himself…. We seldom perceive God’s mercy when it is expressed to us through illness, bereavement or loneliness, and yet how often it is the only way in which God can put an end to the inner flood and outer turmoil which carries us away like a flood! How often we do exclaim, “If only I had a short period of peace, if only something made me aware that life had greatness, that eternity exists!” and God sends us such moments when are brought up short by illness or accident; but instead of understanding that the hour of recollection, of withdrawal and renewal has come, we fight desperately to return as fast as possible to our former state, rejecting the gift concealed in that act of God which frightens us.

As I’m writing these words my friend just called to say her situation just improved and to thank me for praying. Thank God. Her troubles are far from over, but the immediate emergency is calmer. But we don’t always get a quick resolution to a big problem or hurtful situation. Sometimes God lets us stew for a while, giving us a different venue so that we can choose to turn inwards.

I’m thinking of the words in the parable of the prodigal son. After slogging around in the mud and misery of his own choosing for a while, he finally decides to return home. The words are “he came to himself.” While he was wallowing in the mud, he was beside himself.

I’m thinking now about my own self and how and why I often choose to live beside myself instead of within. I think one reason is because I don’t like the home I’m building in there. I prefer the one out here, where I can substitute quick fixes for the real thing. As I think back over the past twenty years or so of my life, I realize that the times I was most “at home” with my interior life were the times that I was praying more. Imagine that. It’s like prayer is the interior designer of our inner houses. The more we use her, the more desirable the interior space becomes.

As I spend more and more time in this chair, or in my bed, recovering from my foot surgery, I realize that God has given me yet another opportunity to work on those inner rooms. Losing the contract on the house we wanted to buy last week was another of God’s gifts. Another chance to focus on the beauty within. 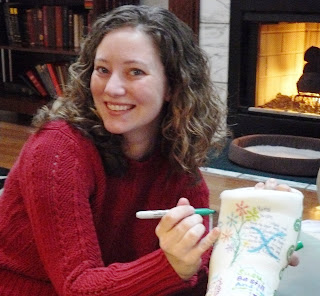 So… in between my times of stillness, sitting here trying to go within, I had two wonderful visitors today. First 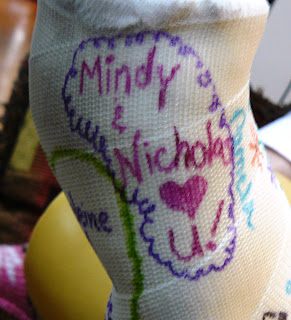 , Mindy brought baby Nicholas (9 weeks old) to see me. She did her cast art while Nicholas and Oreo napped by the fire and I sipped the latte she brought me from Starbucks. I taught Nick to make some cool faces, like this one. Yep, 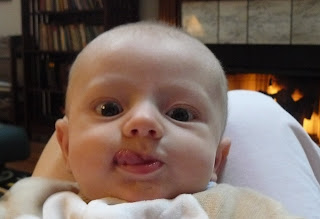 And speaking of eating well, Anna-Sarah brought us lunch today… a yummy Mediterranean tuna salad, fresh clementines (that she peeled for us, hard as that is!), yummy cheese and pita bread, and homemade lemon squares. We had such a delightful visit that I forgot to ask Anna-Sarah to do any cast art. We had so much fun looking at her pictures from a recent trip she and her husband made to Switzerland. Gorgeous.

In fact, while Anna-Sarah was still here, another friend called to tell me 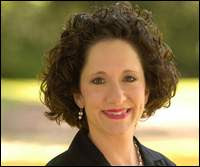 that Melinda Rainey Thompson was being interviewed on Book Talk on TV (from our local public library)… so I switched it on for part of the show. My friend said that Rainey reminded her of me…or the things she was saying about her book reminded her of my current direction with my writing. Rainey got started with a family newsletter that grew into a blog with a huge readership. So, when she queried an agent or publisher about publishing her first book, one of her selling points was the built-in readership she would be bringing with her. (An aside: I celebrated 5000 hits on my blog today, which I started five months ago. So, let me pause and say THANKS to my readers!)

Anyway, Rainey’s new book of essays, The Swag Life, sounds so good I ordered a copy online right away. (btw… SWAG stands for Southern Women Aging Gracefully.) She also teaches writing, so her approach is serious, literary style, even when her topic is light or even humorous. Can’t wait to read it!

And yes, I got some editing done on an essay this morning, which felt good. It’s looking like that fiction novel might be taking a back seat for a while. Sorry, Sweet Carolines. Maybe I’ll get back to you some day. Don’t give up on me. It’s just that I’ve got other stories to tell right now…..
Please share!