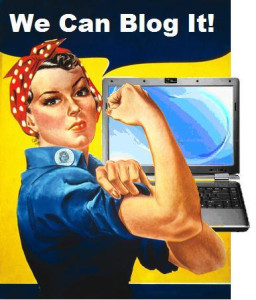 Ugh. I’ve been trying to think of something to blog about for several days… After posting faithfully three times a week for ten years (it was ten years in August) I’ve been struggling with my blog for several months now. Sure, I’m busy with a book tour and finishing up a fourth book project and all that, but writing—the thing I tell myself I live for—just isn’t coming easily these days. (Not only for the blog, but for my next project, which I can’t settle on yet.)

What am I doing instead? Binge-watching “Alias Grace” on Netflix (and wishing I could write like Margaret Atwood, who probably never watches TV), taking my computer to the Apple Store to get some wisdom from the folks at the Genius Bar (actually had a very productive session today), taking book festival posters to Michaels for framing (great Veteran’s day sale on custom framing), and binge-eating mango smoothies, my latest food obsession. So, this afternoon I started thinking about what subjects I used to write about the most on this blog. Here’s what I came up with:

My mother. Who died in May of 2016. I wrote over 60 blog posts about our relationship and her journey with Alzheimer’s between 2007 and 2016, most of which ended up as essays in my first book, Tangles and Plaques: A Mother and Daughter Face Alzheimer’s.

Iconography and spirituality/religion. I quit writing icons in 2012, but sometimes I still write blog posts about iconography, especially weeping icons and other aspects of this liturgical art that play a big part in my novel Cherry Bomb. So, I’ll probably still do some posts about icons in the future, but nothing is really grabbing me right now. And as all authors know, it’s much easier to write about something when one either has issues with it or is extremely excited about. Both of those things have been true about my relationship with God and my Church over the years, but I find myself in a calm and content place with both right now, which doesn’t give much fodder for my pen. You’ll be the first to know when either of them does something else to piss me off or something earth-shatteringly wonderful. (Not that the Virgin birth or Jesus’ rising from the dead weren’t big enough deals… and maybe I need to pay more attention to these events’ eternal wonderment.)

Mental health. Especially about sexual abuse, addiction issues (both food and alcohol), and depression. Instead of blogging about these issues lately, I’m finding myself reading more. I’ve just re-read memoirs by Mary Karr and Carolyn Knapp, and some of Joan Didion’s writing (and did you watch that amazing documentary about her on Netflix? In “The Center Will Not Hold,” Didion said, “Novels are often about things you cannot deal with.” True that.) I think what I’m finding as I read the wisdom of others and watch their talents on the screen is that I don’t have much to say right now that’s very important. I thought about blogging about #MeToo but so much has already been written about it that I don’t see a void to fill. But if you’re looking for something good to read about overcoming life’s adversities (and especially abuse and difficult childhoods) read Meg Jay’s article in today’s Wall Street Journal, “The Secrets of Resilience.” Dr. Jay is a clinical psychologist and has a book coming out on Tuesday: Supernormal: The Untold Story of Adversity and Resilience. As I think about my own struggles and the horrific stories that are being shared on the media right now in the #MeToo “movement,” I think Dr. Jay’s words are very wise and timely:

Finally, remember the ways you have been courageous and strong. Too often we remember what has gone wrong in life rather than what we did to survive and thrive. Think back on a time when you were challenged and give yourself credit for how you made it through. You may already be more resilient than you think.

Good words to close with. Maybe next week I’ll have more to say here, although I will be traveling again with my book tour on two days and learning to Skype with a book club in Texas one night. Talking about my writing is so much easier than actually writing. Pray for me.