Ironincally, today I find myself visiting book clubs and even doing video chats via Skype and Face Time with clubs in other cities and states to discuss books that I have written. Most of the clubs I have spoken with are reading a lot of contemporary books, which I enjoy more than the classics. A couple of weeks ago I met with a group in my own neighborhood, here in Harbor Town on the Mississippi River in downtown Memphis. There were about eighteen women there, ranging in age from their thirties to their seventies (my guess) from all walks of life. Some were retired or stay-at-home moms. Others were still involved in busy careers at colleges and hospitals and other pursuits. They all read voraciously, and sixteen of the eighteen who were present at the meeting had read my novel Cherry Bomb. (The other two bought a copy of it from me after the meeting!) The discussion was intelligent—one woman even asked a question about a choice I made to introduce two characters by name early in the book and then never return to them later—a mistake I wish I could correct. They were enthusiastic about the book, which was rewarding for me as an author. 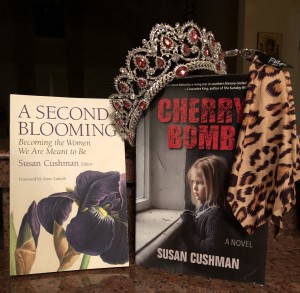 Of course the most exciting experience I’ve had with book clubs was speaking on two panels at the annual Pulpwood Queens Girlfriend Weekend in Nacogdoches, Texas last month. There are over 700 chapters of PQ book clubs all over the world, and their found, Kathy Murphy, reads a couple of hundred books a year to choose their monthly selections for the coming year. The anthology I edited, A Second Blooming, was chosen as their selection for February this year, and Cherry Bomb was chosen to be a “bonus book” for March. So hopefully there are lots of women reading these two books right now! I’ve already had two phone-chat meetings via Face Time with two of those book clubs (both in Texas) already, and I’ve got another one scheduled for next week with a group in Nevada! Gotta’ love technology.

I know I’ve blogged about my trips to the six Friends of the Library groups in small towns all over Mississippi last year (and I’ve got another one coming up on March 8 in Pontotoc and then one more on March 20 at the main library here in Memphis). They operate pretty much like most traditional book clubs, although they try to bring in speakers as often as possible, and they don’t always read the same book each month.
As much as I enjoy giving reads at bookstores and being on panels at literary festivals and conferences (and I LOVE doing both!), there’s something very intimate about being welcomed by a group of people who meet monthly to discuss books.

All this to say that although I haven’t been in a book club in many years, I am so thrilled to see this format for social and literary fellowship is thriving. Here’s what my schedule of meeting with book clubs in 2017 and 2018 looks like, so far. And I’m hoping to get invitations from more clubs as the year progresses! Contact me at sjcushman@gmail.com about visiting your book club in person or by Face Time!

November 9, 2017: Friends of the Library/Starkville, MS

And now for the “working title big reveal” …. My new work-in-progress is a collection of four to six (more or less) novellas or long short stories inspired by my visits to those small towns in Mississippi. Working title? FRIENDS OF THE LIBRARY! Stay tuned….