>Last night a group of folks from my church went 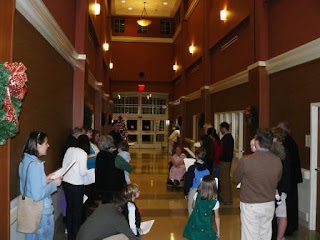 Christmas caroling at Kings Daughters and Sons Nursing Home here in Memphis. We’ve been doing this for several years, but I missed it the last couple of times the group went. I was especially interested in going this year, not only because I love Christmas carols, but also because now that my own mother is in a nursing home (in Jackson) I am more acutely aware of how much joy visitors in general, and children and music in particular, bring to nursing home residents. 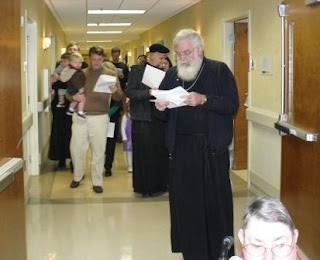 Since we caroled at night, most of the residents were in their rooms, so we just paused in front of their doors and waved as we caroled up one hall and down another.

At times some of the residents who were out in their 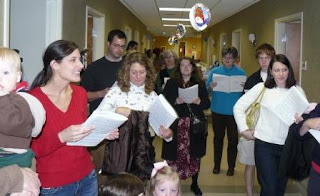 wheelchairs would catch up with us and roll along beside us. One in particular led the procession the whole time.

Since we only sing these carols at Christmas time, I forget about how wonderful the lyrics are… how rich in theology and how full of hope. For some reason I found myself singing this one when I got home last night and during the day today: Hark! The Herald Angels Sing! You can read all the verses and listen to the instrumental version here.

I love this part: 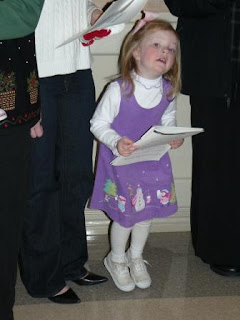 Born that man no more may die,
Born to raise the sons of earth,
Born to give them second birth.
Born to raise the sons of earth. Who are the sons of Earth? The people in the nursing homes are the sons of Earth. And so are those of us fortunate enough to be visiting them and singing carols. (Like little Sarah Anne, straining on tip toes to reach the high notes!) And… raise them how? Where? The Orthodox doctrine of the incarnation, which we celebrate at Christmas, is all about restoring the image, God’s image in man, that was lost at the fall. Raising us up to be all that God created us to be. In this life. Now. But also in the life to come, as the line says, “Born that man no more may die.” So those are two gifts of the Christ child to us: restored life now and eternal life.

I almost got weepy a couple of times last night as I looked into the rooms where these people were confined. I thought about my mother and wondered how she was last night. This morning one of her nurses called to tell me that Mom’s hip seems to be healing, that she doesn’t mention any pain any more and is beginning to walk a little, thank God! But she also mentioned some concerns… she’s not eating well and is losing weight. I offered suggestions about snacks throughout the day, and small finger sandwiches rather than big “meat and 3” type meals, which she’s never preferred. Later in the day the nurse called me back to tell me all the things they were doing to help mom, including snacks 5 times a day, hydration with juice, and nutritional supplements in the form of smoothies and juices. Her tone was so compassionate that my eyes filled up with tears and I thanked her for taking such good care of my mother. She said, “Oh, you’re welcome! We love Miss Effie.”

Then I opened my mail and there was an invitation to the Christmas party at the nursing home, and the suggestion that we send a gift with her name on it by the day before the party, so that Santa’s helpers can give them out during the party. I’ll be visiting Mom the day after Christmas, but the party is on the 23rd so I won’t be there since we’re not visiting until the 26th. But her gift will be there. And Santa’s helpers, who are local volunteers.

It struck me how important volunteering is, not only for those in need, but for those doing the volunteering. It’s good for our souls. It raises us up and reminds us that we are the kings of Earth. It’s our job to take care of those who can’t take care of themselves. There are endless opportunities to do this, all year long, but especially during this season. Our church took up toys for the Memphis Inter Faith Association’s Christmas store again this year, and we’re also putting together baskets for several families that we help on an on-going basis. We’re also collecting items for the children who go to Rachel’s Kids for after-school tutoring, where a number of our members have also volunteered as tutors. You can even make a donation to Rachel’s kids here. 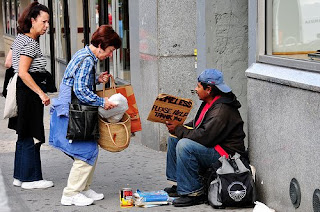 You don’t have to look far to find someone in need. Even the guy at the corner holding the cardboard sign, who is also one of the sons of Earth. 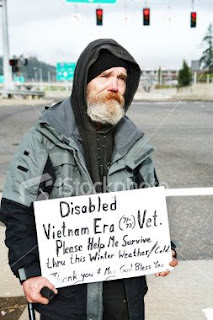 1 thought on “>Born to Raise the Sons of Earth”