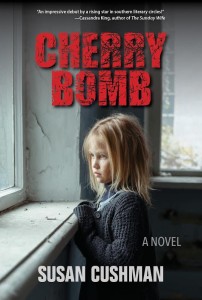 As we head into the weekend (and I head to Turnrow Book Company in Greenwood, Mississippi tomorrow for another event for my novel CHERRY BOMB, at 12 p.m. in the cafe, where lunch will be served!) I’ve decided to share a “teaser” with my readers. I hope it will lead you to your favorite indie bookstore (or Amazon) to buy a copy and read Mare’s story. Enjoy!

Mare’s backpack clinked as she ducked in and out of the pre-dawn shadows. An unusually cool summer breeze rustled the low-hanging crape myrtle branches along the sidewalk. Pausing to rearrange the aerosol cans and wrap them with t-shirts to silence them, she pulled up her hood and looked down the street. No one there. Storefronts were still dark in this Southern city of a quarter million people. Macon, Georgia, felt big compared to the smaller towns of Mare’s childhood. But not so big that she couldn’t find her way through the mostly abandoned city streets on her clandestine missions.

Rounding a corner, she heard scuffling and discovered a homeless man huddled behind a dumpster, the contents of his life stuffed into a shopping cart. His cough disturbed a sleeping cat that sprung from underneath his frayed blanket. An empty bottle rolled onto the sidewalk. Mare hurried by as a light came on in a nearby window.

Taking a nervous breath of the crisp morning air, Mare breathed in the aroma of cinnamon rolls from the bakery across the street. When had she eaten last? She put the thought out of her mind and found her target a few blocks away: Family and Children Services. The parking lot was empty. She moved quickly, choosing a spot near the entrance. She broke the lights on either side of the doorway with one of her cans. She worked swiftly but with deliberation, needing the protection of the quickly fading darkness. She opened a can of black spray paint and stared at the brick wall in front of her.

She shook the can vigorously and felt the familiar jolt of electricity as she heard the metal ball bouncing around inside. The feeling was akin, she felt, to her lungs finally opening after being clamped shut for years. Removing the cap, she approached the wall, took aim, and pressed the valve, releasing a fine spray mist with all the skill of a trained artist.

For the last few weeks, most of her pieces had been simple designs or just tags. Today’s message would be more complex. She had spent months working it out; now she would share it with the world. Well, at least with Macon. The reporter for the Macon News would take care of the rest. After Mare had come to town and started throwing up her graffiti, Margaret Adams had launched her own personal quest—not only to expose Mare’s work, but also to expose Mare. Mare had evaded her grasp so far, moving from one part of town to another, sleeping here and there, always carrying her backpack with her and leaving nothing at the scene except the art itself. Adams had featured several of Mare’s pieces in the News, complete with photographs. Graffiti was not common in the Southeast; the reporter couldn’t leave it alone. Who is this tagger, and where does he live? Adams opined in print. It amused Mare that the reporter thought the artist was a guy.

She always tossed her empty cans into random dumpsters after each hit, careful not to leave a trail. She must not be arrested—it absolutely couldn’t happen—and she had to throw up these next two pieces. Blue lights and sirens approached just as she was getting started, though. Diving behind some shrubs that bordered the parking lot, she held her breath. Two squad cars flew through the blinking orange lights at a nearby intersection, oblivious to her crime. Wiping the sweat from her brow with her sleeve, she crawled out from behind the shrubs and quickened her pace as the sun began to light the wall and wake the town.

Her signature character—a little girl with big, empty eyes and no mouth—would be featured in this piece. She outlined the image with black, painted the hair yellow, and overlaid the face with orange. Bloody drops fell from the red heart painted on the character’s chest. The child’s eyes gazed upward to a large shadow-like creature. The character soon took shape; it was a man, hovering over the girl. The image of the girl faded below her heart, as if her lower body was disappearing.

She’s been disappearing for years, hasn’t she?

Mare felt tears as she viewed the image, biting her lower lip. “Screw you,” she hissed, flipping off the shadow-man.

She heard a car engine and looked at her watch. Almost 6:30. Just enough time for her tag—a red cherry with yellow rays emanating from a black stem and the word BOMB in red bubble letters, outlined with black. She could imagine tomorrow’s headline in the News: