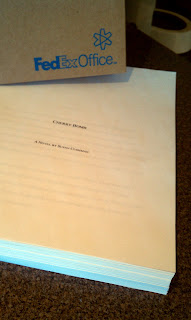 Two years after I drafted the first chapter of my novel, Cherry Bomb, I’m excited to say that this morning I put my 56,587-word manuscript in the mail to a freelance editor in Oxford, Mississippi to get some expert help polishing the words I’ve labored over so intensely. Here’s a summary of the journey so far:

March of 2010: Made the decision to write a novel, and blogged about in “A Novel Idea” at the Southern Authors’ Blog, A Good Blog is Hard to Find.”

Spring of 2010: Submitted early chapters to my fellow writers in the Yoknapatawpha Writers Group (which began in 2007) and received good feedback.

May of 2010: Asked for input from readers in my post, “A Call for Names,” at the Southern Author’s Blog, A Good Blog is Hard to Find, and named the protagonist “Mare.”

June of 2010: Revised those chapters as I continued to draft more, and submitted early chapters to the Yoknapatawpha (YOK) Summer Writer’s Workshop in Oxford, Mississippi. With input from workshop participants and faculty, I added a prologue and continued writing.

November of 2010: Spent a month working on the novel in Seagrove Beach, Florida, with a detour to Oxford, where I co-hosted the 2010 Oxford Creative Nonfiction Conference with Neil White and Kathy Rhodes.

May of 2011: Entered the prologue and first two chapters in the Novel Excerpt division of the Faulkner-Wisdom Creative Writing Competition in New Orleans, and made the short list! (One of the faculty members at the YOK Summer Writers Workshop, Neal Walsh, won that competition.)

June of 2011: Submitted another chapter to the YOK Writers Workshop in Oxford. Continued to revise with help from the feedback I received there. Gave a reading (the prologue and part of chapter one) at Page & Palette Books in Fairhope, Alabama, during the first Fairhope Writers’ Colony Retreat, hosted by Sonny Brewer. Got feed back from Fairhope writers—Sonny Brewer, Suzanne Hudson and Joe Formichella.

November of 2011: Another month of writing at Seagrove Beach… where I almost finished the novel.

April of 2012: FINISHED the first draft and umpteenth revision, added an epilogue, more revisions, and mailed the manuscript to my freelance editor TODAY.

So, you might be asking, “what’s with all the detours to be involved with Creative Nonfiction if you’re writing a novel?

Glad you asked. I’ve been writing seriously since 2006, and my ten published pieces are all essays—Creative Nonfiction. At first I thought I was writing those essays just to build a “platform”—to have something to show to agents when I started looking for representation for a book. But then I fell in love with the genre, so I know more essays are forthcoming.

I also penned two full-length memoirs between 2007 and 2010, before I decided to try to write a novel. I just couldn’t make peace with the idea of going public with some of the stuff in those memoirs, but maybe one day I’ll feel differently.

I hope you’ve enjoyed the recap of Cherry Bomb’s journey so far. Stay tuned…. lots more work to go before she makes it out of the starting gate!