Three years ago I did a post about Christmas stories, which has links to several entertaining stories and essays. Today I’d like to share a wonderful story you can LISTEN TO HERE from a friend and writer who lives in Alabama, Kerry Madden. “Santa Secrets” is funny but also poignant. I hope you enjoy it as much as I did.

Also Harrison Scott Key’s wonderful story, “The Christmas I Don’t Remember,” published in Savannah Magazine. (Key has an essay in the anthology I edited, Southern Writers on Writing, coming from University Press of Mississippi in May of 2018.)

I think one reason I’ve never written any Christmas stories about my own childhood is because my experiences weren’t all that interesting or unusual or humorous. They weren’t even full of drama, which is kind of amazing, since there was lots of drama in my family throughout the rest of the year. It was as though everyone was their best self for Christmas—I don’t even remember fighting with my brother Mike at Christmas. Here are my favorite memories:

Both my grandmothers (who lost their husbands at a young age) spent Christmas with us. “Mamaw” lived in Meridian, Mississippi, and we were in Jackson, so she would come over and spend a few days with us. “Mama Mary” lived in town, so she would come over on Christmas morning. Having both of them with us made Christmas extra special. I’m remembering them being with us during the 1950s and 1960s especially. (Mama Mary actually lived with us for a few years in the late 1950s.)

My Aunt Barbara Jo and Uncle Dan and their kids, my first cousins Tommy and Amanda, were also a big part of my memories. We did Thanksgiving at their house for many years, but we also visited them at Christmas time (and they were often at our house) where my favorite memory is my Uncle Dan and my father singing “O Holy Night.” Uncle Dan sang tenor in his church choir and Daddy was a baritone. Last night as I watched Brooke Simpson, one of the contestants in the finale on “The Voice,” sing “O Holy Night,” it brought back the memory… and tears to my eyes.

We did Santa Clause until my brother and I were around 7 or 8, I think… and I remember running into the living room to see the (unwrapped) gifts under the tree from Santa. Most of the smaller, wrapped gifts from our parents and others were clothes or small games. But Santa brought things like bicycles, life-size dolls, piano keyboards, and sports equipment. A favorite gift was this whirly-gig thing you sat in, tucked your feet under the seat, and spun around and around like a hamster. The picture at the top of the post is me sitting on it, holding my Chatty Cathy doll, around 1961 or 1962. Of course Mike got bored with it eventually. One day he decided he could make it spin faster if he took a running leap into it, and he missed the seat and cracked his two upper front teeth on the floor. Another time he took it off its frame and road it down the street and crashed at the bottom of the hill. I’m sure the toy wouldn’t pass today’s safety requirements, but we loved it.

If the spinning-wheel toy (can’t remember what it was called) was the favorite toy of my brother and me, I think that Omagles were probably the favorite childhood toy of our three children. They were giant plastic building pieces and wheels. Our kids made forts and stores and tents, and even this go-cart, which they could ride in. Hours of fun before they had computers and iPads and cell phones. Even before our first video game, Atari. And now Omagles are back! There’s an Omagles Facebook page, and you can buy them from Amazon!

When I got married and we began to celebrate Christmas in our own home, especially once our three kids arrived, we started new traditions. One was hiding the Christmas pickle ornament in the tree after the kids went to bed on Christmas eve. They would come running in to find the pickle, and the finder got an extra gift. We continued this tradition even through their young adult years in college, and we’ve given pickle ornaments to our married kids, hoping they will continue the tradition with their own kids. 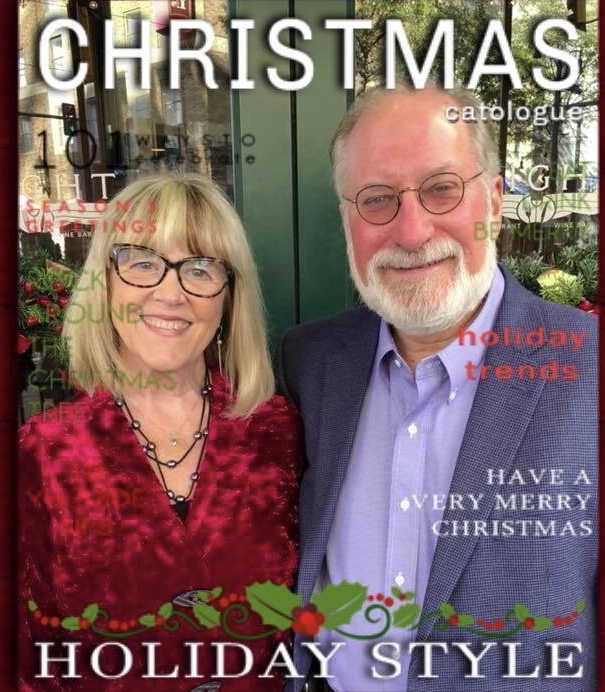