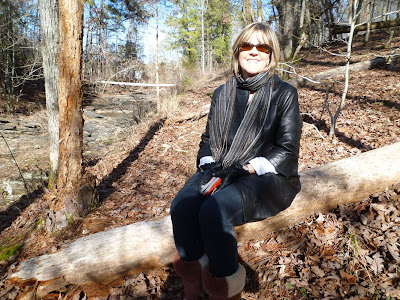 I just returned from a weekend at Lake Norrell, Arkanasas, where my best friend’s mother and sister live in neighboring lake houses. Daphne, her middle son, Simon, her daschund, Violet (whom we affectionately call “Violent,”) and I drove out to the lake house Friday afternoon (after my drive to Little Rock) and spent two nights there. I was OFF THE GRID for 52 hours, except for posting a couple of photos with my Droid during the weekend. 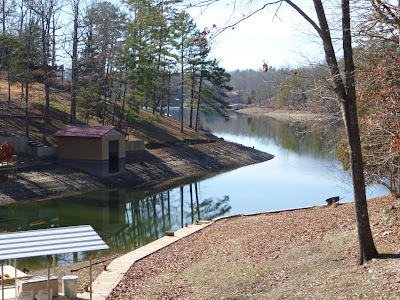 Daphne’s mother’s lake house is lovely—she has a gorgeous view from her back porch and her dock. I’ve been there in the summer, (check out these pictures of the Lake Norrell 4th of July boat parade in 2008) when swimming and kayaking are the order of the day. But in the middle of winter, it was different. Quiet. Calm. Everything a city girl needs to unwind over a weekend, right? 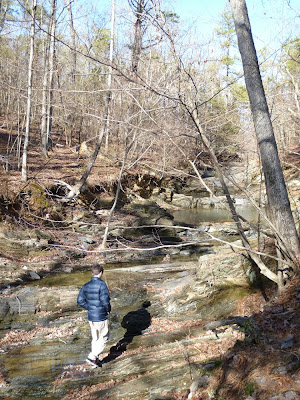 The snow melted before I arrived, but the woods were still beautiful. I went on a hike with Daphne, Simon and the dogs on Saturday. They would probably say it was an easy walk, but it was a stretch for me. First we drove down a country road and parked the pickup truck by a creek. From there we walked up the side of the creek (well, Simon walked through the creek bed) a ways, so that at one point I couldn’t see the road at all. Nothing but woods in all directions. And the path was slippery in points, and steep. I can count on one hand the number of times in my life I’ve been in this type of setting, and each time it’s a bit scary to me. 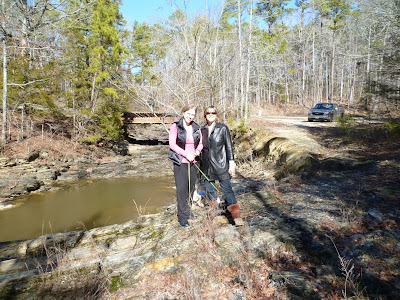 There’s a monastery I visit in Michigan that has woods with paths that have been worn by the nuns on their daily walks. But even there—surrounded by prayer and warriors of the angelic realm—I get nervous when I’m alone in the woods. I’m thinking it’s a reflection of the state of my soul, which is tarnished by too much love of the urban world.

And so this morning, snuggled safely in one of the guest rooms at the lake house with a cup of coffee and a down comforter, I wrote this poem. I didn’t set out to write a poem, but simply a reflection that I could use as a blog post. Instead, the poem sort of appeared on the page. I won’t try to revise it (don’t really know how) but will just share it as it came to me in the lake house this morning. 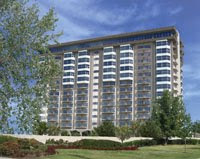 Driving home to Memphis this afternoon, I found my senses stirring as I approached the Arkansas-Mississippi bridge and saw the skyscrapers on the other side of the river. I looked downriver at the River Tower Condominiums and imagined living there in that high rise with a perpetual view of the water and the built-in community the residents enjoy (not to mention the fitness center, hotel lobby bar, and swimming pool). I think I would love to live there, where I could enjoy the buzz of downtown living with a safe view of “nature” from my balcony. Yep, I’m a city girl.

My soul is not ready for Paradise
If it cannot be still in the woods—
Away from the city
Away from the buzz
I found myself missing the ’hood.

We followed a path by a creek bed
At times slipping perilously close
The drop was so steep and the
Rocks cold and hard
Shooting fear from my head to my toes.

Later I sat on the lakeside,
The afternoon sun on my face,
I breathed in the air
And tried to be still
So the beauty my soul would embrace.

The sun glistened bright on the water,
The sky overhead, clear and blue,
A boat motored by sending
Waves to the shore
And it was in their wake that I knew.

I wanted the thrill of the boat ride,
Instead of the world set apart,
The heavenly bliss of the
Quiet and peace
Was lost on this city girl’s heart.