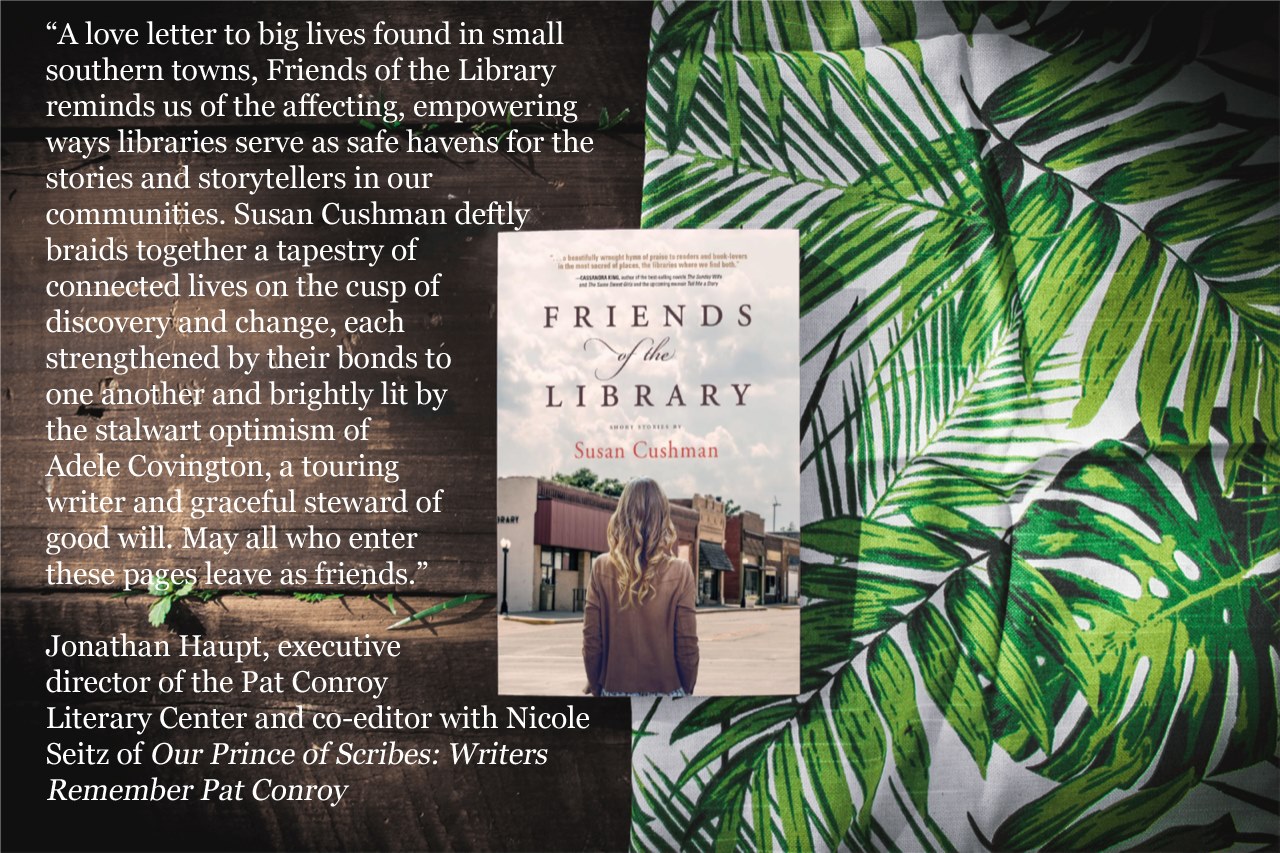 Yesterday afternoon I had a wonderful experience at a small gathering of readers and writers at Ernest & Hadley Booksellers, in Tuscaloosa, Alabama, owned by one of my favorite booksellers, Easty Lambert-Brown. It was my third time to do a reading/signing at this lovely bookstore, this time for my new short story collection FRIENDS OF THE LIBRARY.

What made this event stand out from so many others? I think it was something Easty said as we were discussing Friends of the Library. She said that she felt like she got to know me, the author, so much better through the stories. I created a fictional author, Adele Covington, and the stories are told from her point of view as she visits the ten small towns in Mississippi and gets involved in the lives of the residents there. The issues she helps them with are often her own. My own. Maybe these fictional stories turned out to be a sneaky way of writing a memoir.

But it’s another thing Easty said that encouraged me so much. She said it was obvious that Adele loves to connect. She connects with people, and she connects people to one another. Easty said that she sees me doing that in real life, and she wondered if I knew this about myself. Wow. Just wow. She hit on something important. Not because it’s about me, although I am fairly self-aware and did already know that I love connecting people. It’s why I’ve edited three anthologies of essays, with a total of 118 essays by other authors. I loved bringing them together. And it doesn’t stop with anthologies.

In March I was invited to speak at a women’s retreat at The Homestead Education Center in Starkville, Mississippi. The owner and director, Alison Buehler, asked me to invite several authors who had contributed essays to my first anthology, A Second Blooming: Becoming the Women We Are Meant to Be, to each lead a workshop during the weekend retreat. The weekend was magical. The women who came, many of whom were perfect strangers to each other prior to the retreat, made significant connections as we explored the ways we can bloom into the selves we hope to be.

One of the retreat-goers was Susan Schepens, who lives in Tuscaloosa and came to my reading at Ernest & Hadley yesterday and joined Jennifer Horne and me for dinner afterwards. We discussed researching for the books we are writing. We built on the connection that the three of us started at the retreat, and that Susan and I have had since 2010 and Jennifer and I have had since 2006.

Connection has always been important to me. Over the years I have organized and led several groups for this purpose, including a group for mothers of adopted children. And I’ve been in book clubs and writing groups. I have also hosted “salons” in our home to bring together people to discuss literature and other topics.

Last week I spoke at the Friends of the Library luncheon at the library in Winona, Mississippi. I had a long discussion with Bootsie Weed, retired librarian who is now president of their Friends group, about their town and how it’s doing. Bootsie is worried about Winona, saying that first they were upset when WalMart came to town, taking away customers from small business owners. And then they were upset again when it left, taking so many jobs with them. Bootsie said that with so many people shopping online now, stores are closing and the town itself is shrinking. The library is a stronghold of the community, and a place of connecting, which is so important.

I’m spending a couple of nights at another writer-friend’s home in Hoover, Alabama. Wendy Reed and I also met in 2006, when she and Jennifer Horne had just published All Out of Faith: Southern Women on Spirituality, and were considering a follow up anthology. I was honored to have an essay in their second collection, Circling Faith: Southern Women on Spirituality, in 2012. Tonight Wendy is hosting a salon for me in her home, and she has invited friends from near and far, some but not all writers.

This morning while she was at the University of Alabama teaching a class, I snooped around Wendy’s house, checking out her many books, as I love to do in other writers’ homes. Next to a comfy chair in her living room I found Social: Why Our Brains Are Wired to Connect by Matthew D. Lieberman. (It was sitting next to the current read of her husband, Greg, about Da Vinci.) A much more scientific/academic book than I would usually pick up, I scanned Social this morning because of the title. Some of his words reminded me of my conversation with Bootsie Weed in Winona, and of the retreats and groups and salons I’ve been part of:

Everything we have learned about the social brain tells us that we are wired to make and keep social connections, that we feel pain when these connections are threatened, and that our identity, our sense of self, is intimately tied up with the groups we are a part of. . . . Our basic urges include the need to belong, right along with the need for food and water.

In the Epilogue, Lieberman’s words corroborate my response to what Easty said to me yesterday:

Finally, we humans have the ability to reflect on ourselves, to think about our characteristics, beliefs, and values in relation to other people.

I’m so thankful for the many social connections I have, and the venues they offer for this type of reflection. Even social media, which is eschewed by many.

But I consider Facebook, Instagram, and Twitter to be communities where I find connections with friends I might not have otherwise met, and also with close friends I don’t see often in person. We all laughed yesterday when a Facebook friend who lives in Tuscaloosa came into the bookstore for my event and we instantly shouted each other’s names and hugged. Easty, the bookseller, asked how we knew each other. We both smiled and said, “Facebook.”