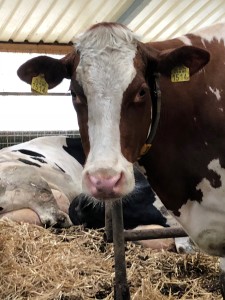 I’m 67 years old, and as far as I can remember, I had never touched a cow (or even been on a working farm) until last week. We flew into Amsterdam, and after a brief tour, we boarded our Viking long boat for a cruise down the Rhine River, which would end a week later in Basel, Switzerland. You can see the whole itinerary on the Viking web site if you’re interested. (I highly recommend the trip!) Meanwhile, I’m going to write reflections on each stop along the way here on my blog, so if you’d like to see more than just the photos and captions I shared on Facebook and

Our boat arrived in Kinderdijk, Netherlands, on May 10 while we were sleeping, and it was magical to wake up in such a beautiful place. I’m surprised to say that our tour of a Dutch cheese/dairy farm was one of this city girl’s favorite events of the week. 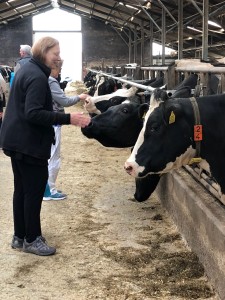 The Kuiper Farm is currently owned by a fifth generation farmer, who gave us a tour of the barn, where I petted a cow for the first time I can ever remember. We learned about the personalities of the cows—how #93 was the leader—and so my friend Deb started calling me #93 for the rest of the trip.

The cows have to stay inside the barn all winter and on the spring day when they are finally let out to graze in the pastures they go running and leaping joyfully, celebrating their freedom. You can watch this on several You Tube videos, like this one, of the “dancing cows.”

The farmer’s daughter, Desiree, showed us how cheese was made and we sampled the best gouda I’ve ever tasted. (And yes, we brought some home.) And the good news is that the farmer’s 21-year-old son has agreed to buy the farm and keep it in the family as his dad retires… and his fiancé wants to learn to make cheese.

The farmer’s wife makes the cheese, and they sell it in their shop to tourists and locals. I wondered what their lives are like, on a farm where the cows must be milked twice a day and the production of cheese is almost a 24/7 process. There must be something rewarding about this life, since so far five generations have stayed “down on the farm.” Maybe they’ve never seen Paris….

The locals line up for what they call “grass cheese” every spring, when the first batch of cheese is made after the cows have been grazing the fresh grass rather than the dried hay they eat all winter. Who knew that “grass cheese” was a thing? And you can even get it in Georgia! 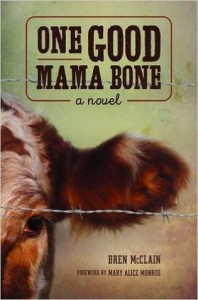 As I spent time with these cows, I thought about my friend Bren McClain’s novel, One Good Mama Bone, and the inspiration that “Mama Red” is to the protagonist in the story. I appreciate her book so much more after being in touch with the cows at the Kuiper Farm, although the cows in her story are raised for beef rather than dairy.

Our next excursion was to visit the Kinderdijk windmills—another “first” for this city gal! Stay tuned!