>My friend and fellow iconographer, Kerry, came over Tuesday to 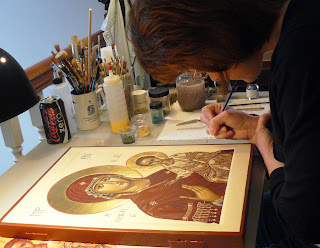 work on the icon of the Mother of God, Directress. It’s the one she and I have been working on together for a while…. one of two icons that will go in the front of the nave at St. John Orthodox Church, our parish here in Memphis. The other icon is Christ, the 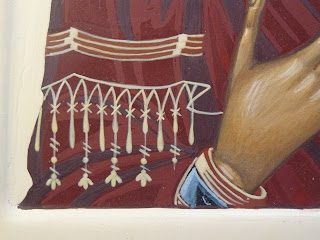 Lifegiver. Here’s Kerry, putting the finishing touches on the icon─she’s really good at the details, like this gold trim on the Holy Virgin’s sleeve.

And here’s the finished icon. Well, we 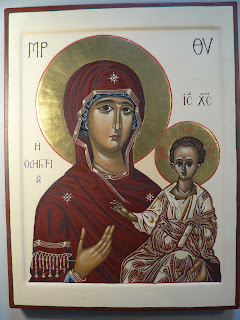 still have to varnish it, which we’ll do when the icon of Christ is complete. The icon of the Mother of God will be placed on a stand in the front of the church, on the left side of the aisle. The icon of Christ will go on the right side. Worshippers will light candles and offer prayers before these icons… no matter which side of the aisle they sit or stand on during services. It’s not like the people on the left side are followers of the Mother of God and the people on the right side are followers of Christ. We all embrace the Son and His Mother and we have to cross the aisle in order to do so.

Watching President Bush deliver his State of the Union message Monday night reminded me of the another President’s warning, in 1858… that a house divided cannot stand. The partisanship was so vivid, with Democrats and Republicans seated across the aisle from eachother, and with standing ovations limited almost exclusively to one side. Whether or not one believes the two-party system is a good idea, who can deny the damage done to the House─the United States of America─by the hurting things said and done to fellow Americans across the aisle.

I’ve been standing and sitting on the left side of the aisle in my church for many years. I’m not sure why this is, but we are all creatures of habit, and this has become my habit. As far as I know, it was never a decision that I made based on the choices of other parishioners that I did or did not want to be near during worship services. But this past Sunday when I went into the nave for the Divine Liturgy, I sat on the right side of the aisle… on the far right end of a pew, so that I could put my left leg, the one in the cast, up on a pillow on the pew during the service and be able to face the front more easily. It was strictly a move dictated by physical disability. It worked well, so I’ll be sitting on the right side for the duration of my cast-wearing experience. And then I’ll probably cross the aisle back to my “regular” pew… where my five-year-old Goddaughter can find me easily when it’s time for Communion. And where, well, where I’ve become comfortable.

So, after Liturgy, during Coffee Hour downstairs in the fellowship hall, I laughed when a friend said to me, tongue in cheek, “Are you mad at someone on the left side of the aisle?” We shared a knowing look, and then I explained the reason for my move. We laughed again, but also commented briefly, that we both know people who have, indeed, crossed the aisle to avoid sitting near people with whom they have unresolved issues. And yet we exchange the “kiss of peace” before receiving the Body and Blood of Christ during the Sacrament of Holy Communion… a physical expression of the spiritual reality of our unity. Don’t get me wrong…I’m no stranger to anger. And I’ve refrained from receiving the sacrament for weeks at a time due to my sinful anger. Almost every time I offer my confession at the Sacrament of Confession, my confessor asks me this question: “Are you at peace with those around you?” It’s an important question. We compromise the unity of the church when we refuse to let go of anger… when we refuse to forgive.

Again, I’m speaking to myself first here… forgiveness doesn’t always come easy for me, when I feel that I’ve been wronged. I even wrote an essay about it called “Blocked.” I was blocked from writing─not writing prose, but writing icons─because of my unwillingness to let go of this destructive anger. Finally I was able to forgive and to ask forgiveness, and the healing could then begin.

I’ve been asking friends who they will vote for in the upcoming presidential election. Friends on both sides of the aisles at St. John Orthodox Church. Which seems to have nothing whatsoever to do with their political choices. I have dear friends on both sides of the issues at stake, and I am still undecided. Yes. But this much I know: my decision to vote for one or another political candidate won’t change these friendships, which aren’t based on our politics. These friendships are based on our mutual love and commitment to the well-being of the other. I’m so thankful for friends like these. 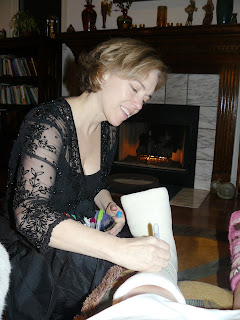 Like Daphne and Nancy, who both visited and signed my cast recently. These are both Southern gals… and yes, I’m sure our friendships are more natural because of shared cultural roots. I was reminded of this fact recently when a transplanted Northerner shared with me her struggle to make friends here in the South. I agreed with her that “Southern hospitality” can be very superficial… that just because someone will cook you a meal and run errands for you when you’re sick, doesn’t also mean they want to let you into their “inner circle.” Intimate friendships without shared 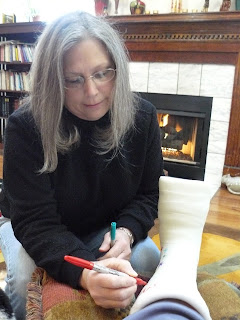 history are probably rare, and certainly take lots of work and desire on both parts. This was a lovely woman who has lived in the South for ten years and is still lonely and isolated. It seems that her struggle has to do with people being willing to cross a different “aisle” … the Mason-Dixon line.

Later I thought about my mother-in-law. She was from New England and was a military wife who made friends easily wherever she lived. Of course, making friends on military bases with other officers’ wives isn’t the same and trying to break into a cultural “click.” But I watched as Ginny reached out to people in her church and in her neighborhood after her husband retired from the military, and even in the South (Georgia and Mississippi) she always made friends. I guess she was fortunate to find folks who were willing to cross the aisle for her. And they were equally blessed by her friendship. Even though she wasn’t from the South.
Please share!