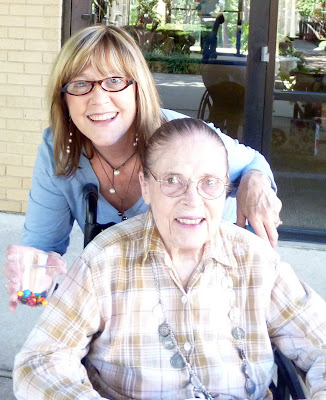 I haven’t blogged about my visits with my mother in a while. She has Alzheimer’s and has been confined to a wheelchair in a nursing home since November of 2008. (See “The Purse.”) The last time I posted about her was in June:

“I Can’t Find My Panties.” and “Cutting Effie’s Hair.”

and back in January:

“The People in the Box.”

I was telling a friend about my recent visit with Mom, and she said she has a hard time going to nursing homes. It’s so depressing. I remember when my grandmother was in this same nursing home, and my mother would visit her regularly, but I couldn’t bring myself to go very often because of how painful it was for me. I regret that so much now, because I know that each of my visits brought her much joy–even if she didn’t recognize me or remember that I was there. Because “Emotions Outlast the Memories.”

The truth is that the visits get harder because Mom’s stories are disappearing. She has lost all the context of her 83 years of living. I can no longer share photos of her grandchildren and great-grandchildren because she has no idea who they are. She has no emotional response to the photographs and just asks me over and over “who is that?” and then says, “I don’t remember them.” So I’ve quit showing her photographs. There are lots of pictures of our family on the bulletin board on the wall in her room, and in frames around the room, but I just don’t take new ones when I visit now. 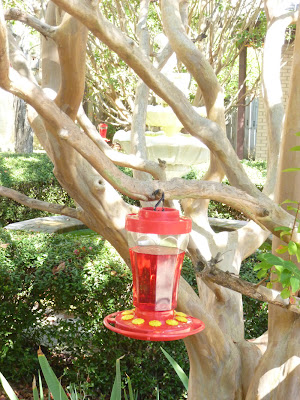 We typically sit outside on the patio, where she loves to watch the hummingbirds (none visited on Wednesday) and flowers, and the other people coming and going through the doors to the lobby. But sometimes, when it’s either too hot or too cold on the patio, we sit in the front lobby, where we can see the tall pine trees on the wooded park that separates the nursing home from a baseball park.

“Mom, do you remember all the summers we spent at those baseball fields? Mike (my brother) played Little League, and Dad was a coach?”

“My brother, your son. He died about three years ago. But we spent so many summers watching him play baseball.”

And so I change the subject:

Mom enjoyed the entire pack of M & M’s, but at one point the chocolate and nuts were getting stuck in her teeth, and the coffee was gone, so I got a cup of water and offered it to her.

“What’s that?” she asked as she took the cup from me.

“What am I supposed to do with it?”

“Drink some to help wash the peanuts and chocolate out of your teeth.”

“Peanuts and chocolate? Oh, I’d love some, but I’ve got something stuck in my pockets.”

A few sips of water and she’s staring at the trees again. “It’s amazing how many people are in there.”

“You mean how many trees?”

“Yep. I remember when they weren’t so tall, when I was a little girl and we came over here to watch Mike play baseball.” 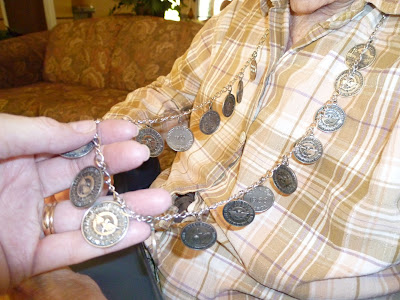 And so I try for one more story. Mom is wearing a necklace that has souvenir coins from all the trips my dad earned selling life insurance back in the 50s and 60s. Nassau. Hilton Head. New York. Mom went with him to all these exotic-sounding places and they always brought me back souvenirs. When I found this necklace on which Mom had collected the commemorative coins from the trip, I thought it would help her remember.

“Look, Mom. These coins remind you of all those wonderful trips Dad won selling life insurance. Remember going with him to Nassau? It was so beautiful. And so many other wonderful places.”

“Sure, you did, Mom. I’ve got lots of photographs of you and Dad on those trips. Would you like me to bring some on my next visit?”

“Who are you going to visit?”

“You, Mom. You know I drive down from Memphis to visit you a couple of times a month. Like today.”

“You drive by yourself? Are you sure that’s safe?”

If you’re new to my blog and would like to “catch up” on the Effie stories, here are a few links to older posts:

Links to other posts about Mom: