With just over two weeks left in 2017, I decided to put together my “end of year book list” and share it with my readers. I also decided to try and construct a “book tree” to celebrate the season, using all the books I’ve read and published this year. I think I made the base too wide, so the tree isn’t as tall or shapely as I hoped, but after two attempts, I gave up and snapped a picture of my best effort. Now I’ve got to figure out where to put these books, since all my book shelves are full! 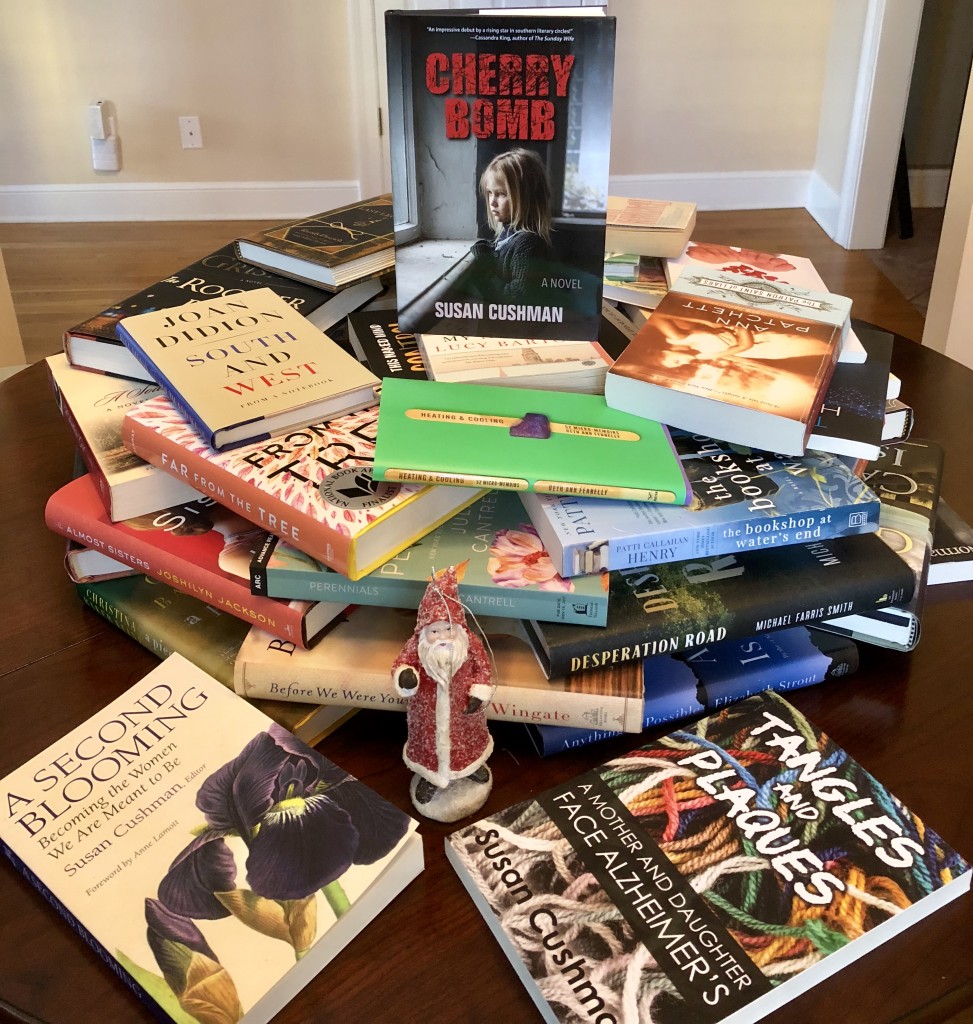 What an amazing year it’s been! Publishing three books—Tangles and Plaques: A Mother and Daughter Face Alzheimer’s, A Second Blooming: Becoming the Women We Are Meant to Be, and Cherry Bomb—and having an essay published in another anthology (Take Care: Tales, Tips, and Love From Women Caregivers, edited by Elayne Clift) have made for an exciting year. As I mentioned in a previous post, I have driven 9,800 miles (in 8 states) for readings, signings, salons, book club meetings, library events, and literary festivals from March through December. My final two events for the year are coming up this week: Thursday night I’m reading CHERRY BOMB at Novel bookstore in Memphis, and Saturday I’m signing CHERRY BOMB at Books-A-Million in Southaven, Mississippi. I’ve got six more events scheduled for CHERRY BOMB in 2018, and then my fourth book will be released in May: Southern Writers on Writing—another anthology I edited.

As a writer, I find that reading is not only enjoyable but crucial to my growth. I read a wide variety of books, from poetry and spirituality to self-help/psychology and other nonfiction, books about art, essay anthologies, memoir, and fiction (mostly novels.) As of today, I’ve read 46 books in 2017, and hope to finish one to two more before the end of the year. I read 38 books in 2016… you can read that list here if you’re curious.

I know 18 of the authors of these books personally, and would love to meet many of the others some day, especially Anne Lamott, Joan Didion, and Ann Patchett. If I had to choose a favorite book from 2017, it would be Before We Were Yours by Lisa Wingate. It’s the book I wish I had written.

What’s up for 2018? I’m currently reading Gold Dust Woman: The Biography of Stevie Nicks by Stephen Davis. This is a real departure for me, as I rarely read biographies, but this one really captures the culture and music of much of my life, and I’m really enjoying it. And on the top of my “to read” stack are three novels:

Love and Other Consolation Prizes by Jamie Ford

Secrets of the Devil Vine by Faith Kaiser

So, here’s my list. It’s pretty much in the order in which I read the books. I’d love to know what you read this year. If you publish a year-end list, please leave me a link as a comment here or on Facebook. Happy holiday reading!!!

The Opposite of Everyone by Joshilyn Jackson

A Southern Girl by John Warley

Time Was Soft There by Jeremy Mercer

Garden in the East: The Spiritual Life of the Body by Angela Doll Carlson

The Statue and the Fury: A Year of Art, Race, Music, and Cocktails by Jim Dees

This Close to Happy: A Reckoning With Depression by Daphne Merkin

The Girls of August by Anne Rivers Siddons

Truly Human: Recovering Your Humanity in a Broken World by Kevin Scherer

My Name is Lucy Barton by Elizabeth Strout

South and West by Joan Didion

The Nightingale by Kristin Hannah

Anything is Possible by Elizabeth Strout

What Alice Forgot by Liane Moriarty

The Cement Garden by Ian McEwen

The Pen and the Brush: How Passion for Art Shaped Nineteenth-Century French Novels by Anka Muhlstein

A Piece of the World by Christina Baker Kline

The Almost Sisters by Joshilyn Jackson

My Soul Looks Back by Jessica B. Harris

That Woman From Mississippi by Norma Watkins

The Bookshop at Water’s End by Patti Callahan Henry

This Naked Mind by Annie Grace

The Last Lecture by Randy Pausch

The Cage-Maker by Nicole Seitz

The Address by Fiona Davis

Among the Mensans by Corey Mesler

The Patron Saint of Liars by Ann Patchett

The Rooster Bar by John Grisham

Far From the Tree by Robin Benway

Dancing With My Father by Leif Anderson