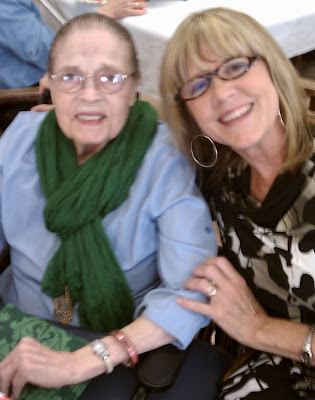 On Thursday I went to the annual Christmas party at Lakeland Nursing Home in Jackson, Mississippi, where my mother has been a resident for three years. 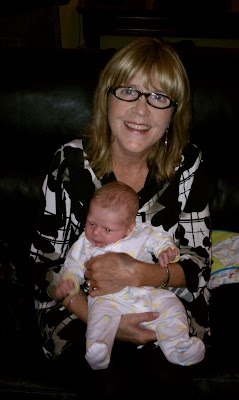 But first I visited my niece, Aubrey Leigh Goodwin, and met my new great nephew, Thomas Goodwin. It saddened me that my mother would never understand that he is her great grandson, since she no longer remembers my brother, Mike, who died five years ago this coming January. It was a joy to meet little Thomas, and to see so many of my brother’s beautiful features in his tiny face. But on to the party…

Mom was wearing a pretty green scarf when I greeted her in the dining room, and I said, “Oh what a pretty scarf! Is that new?”

“No I’ve had it for years.” She fingered the gold beads on its edges. 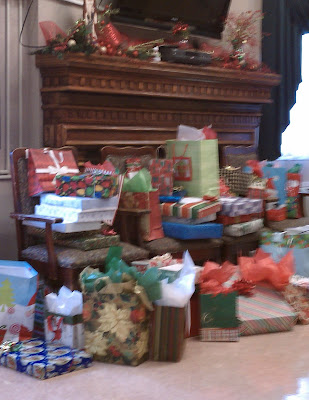 Then I saw another resident wearing one just like it and I asked her where she got it. She pointed to a young woman standing near one of the doors and said, “She gave them to me and to your mom.” So I introduced myself to the woman and learned that she comes to Lakeland every week or so and just gives gifts and visits with residents. She said my mother is always smiling and chatty and she loves to visit with her. What a gift to know this.

Residents’ families had sent “Santa Gifts” to be given out by a visiting Santa during the party. Mom kept asking me over and over “who sent these things?” When I put the blingy bracelet on her arm and said, “Merry Christmas,” she said, “Well, let’s put this away until Christmas.” And I would say, “No, Mom, this is to wear and enjoy now!” Same thing when she opened my gift, two blouses with matching slacks. She did have an opinion about the blouses, though, saying, “I like that one better,” pointing to the peach flowered top and khaki slacks. And she loved the snow globe that played, “Deck the Halls,” while snow came down on a little Christmas tree. 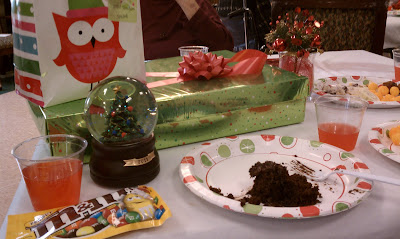 We sat near the food table, where she was fascinated by the cups of punch that were lined up, saying, “look how pretty those people are on that table over there… what are they for?”

And she ate most of 3 pieces of cake (she’s a picky eater!) because she could see the chocolate one, the coconut cake, and the white cake with Christmas icing, and she wanted to have some of each. 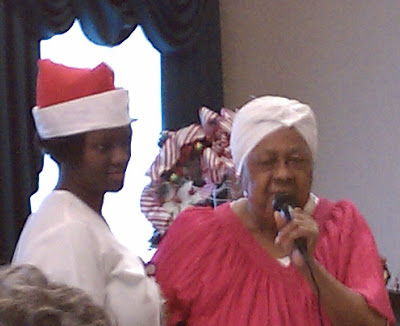 After some Christmas carols, this woman, Hattie, who is a resident at Lakeland, stood up and recited a poem she says she learned in Sunday School fifty years ago. It was lengthy and included singing a few lines in the middle, beautifully telling the story of Christ’s birth and bringing me to tears.

After the party I went with Mom to her room to put away her new clothes, and she said, “It feels small in here.” So I rolled here back into the hall and parked her next to the woman with the matching scarf and kissed her goodbye.

“You’re not leaving, are you?”

This is always the hard part of my visits.

The woman next to her reached over and held Mom hand and said,”I’ll be here, Effie.” This woman is aware of Mom’s Alzheimer’s and seems to find a way to just be with her in her little world. “We’ll find something to talk about.”

And then the woman smiled and winked at me.