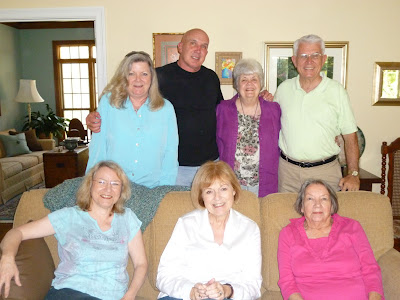 What a treat I had on Wednesday, when Ren Hinote invited me to join the Fairhope Writers for their weekly (yes!) writing critique group meeting in her lovely home near the Mobile Bay in Fairhope, Alabama. I drove over from Gulf Shores and spent the afternoon with seven folks who are all actively working on memoir or fiction writing.

Writing group member, P. T. Paul’s book, To Live and Write in Dixie, blends poetry and prose to offer the reader an insightful look at the South through the eyes of a true artist. P. T. got her MFA in creative writing at the University of South Alabama, and she lends a wonderful expertise to this group of very active writers. 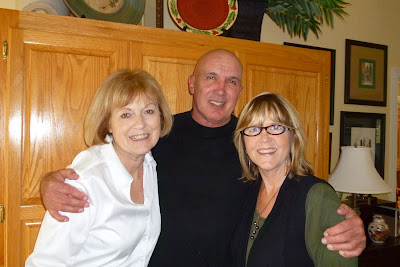 Ren Hinote, the hostess for this week’s meeting, is a delightful woman whom I met in Oxford in November at the 2010 Oxford Creative Nonfiction Conference. Ren, and fellow writing group member, Robert O’Daniel, have already registered for the 2011 Memphis Creative Nonficiton Workshop in September. Robert is writing about a family dealing with Alzheimer’s, and Ren is writing a gripping memoir. Robert was generous to loan me his copy of Labrinthe by Kate Mosse, after he read the first chapter of my novel-in-progress, saying that it might help me to see how another writer blended the lives of characters from different time periods, as I’m attempting to do with Cherry Bomb. I just love how writers reach out and help one another. (That’s Ren, Robert and me in the photo.)

As we went around the room, each member read from their recent work-in-progress and received encouraging comments from the other members, as we enjoyed coffee, soft drinks, cookies, and fresh fruit in Ren’s beautiful den. Although the Mobile Bay isn’t visible from the windows, just knowing it was out there, close by, gave an added beauty to the afternoon.

Sonya, Bob, Tootie, and Kaki rounded out this week’s gathering, and I enjoyed everyone’s writing so much. And not just their writing, but the company of like-minded folks who get it—the importance of the written word in sharing our stories. One member laughed as she told of making copies of the book review she had published and sent to “all her friends who think she’s wasting her time writing.” We all laughed and nodded, like folks at a twelve-steps meeting when such a universal feeling is shared. Another member read his historical narrative about the Grand Hotel at Point Clear, and then his revised version once he applied the principals of creative nonfiction he was learning from the group, and the story began to really sing. (It was more interesting to hear, knowing that his ancestors were once owners of the Grand Hotel.)

These folks are part of a larger writing group in Fairhope called the Fairhope Pensters, which was organized in 1965 and meets monthly, usually drawing about 45 people. I’m so honored to be invited to speak to their group next February. I’m in the company of past speakers like T. K. Thorne, whose debut novel, Noah’s Wife, won the 2009 Book of the Year Award for Historical Fiction. 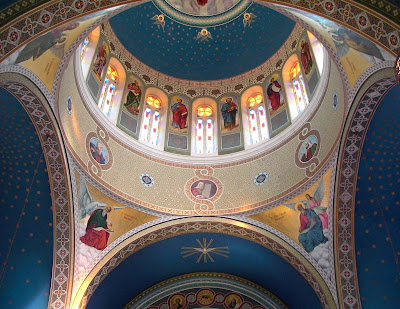 When they learned that I’m Orthodox and write icons, they asked me if I had ever visited the Malbis Plantation Greek Orthodox Church, which I had not even heard of. Once an active parish and monastery, this beautiful Byzantine building is now a museum, full of mosaics and iconography. One member in the group said, “it’s like being inside a cloisanne egg.” I was planning on stopping by on the drive home to Memphis tomorrow, but that was before I broke my ankle. 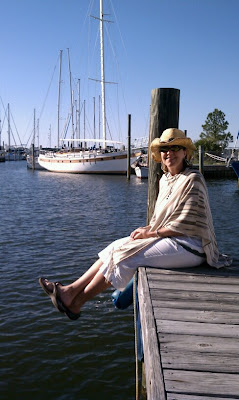 I’m tempted just to end this post with that last sentence, but I hate it when writers leave me hanging like that so, here’s the story.

Thursday afternoon I was on a boat in Orange Beach which was about to embark on a sunset dolphin cruise, when I missed a step moving to the front of the boat (well, the step was about 2 feet deep) and twisted my ankle. Five hours later (after 4 hours in the emergency room) I was headed back to the condo with my foot in a splint, and a non-displaced fracture of the distal fibula. I’ve got an appointment at Campbell Clinic in Memphis on Monday to find out whether or not it will need surgery. 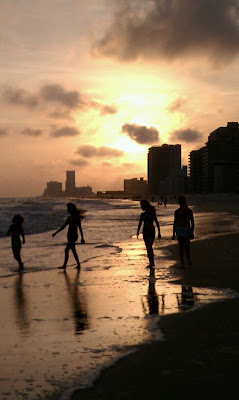 And so my wonderful spring break vacation in Gulf Shores ends on a tough note. But I’m so grateful to my friend, Daphne, and her kids, who are taking such good care of me and will drive me home to Memphis tomorrow. I’m trying to look on the bright side (which is hard to do, with my daughter’s wedding in 6 weeks and the possibility of surgery and a cast)… if I’m laid up for a while, maybe I’ll get some writing done and make the Fairhope Writers proud.