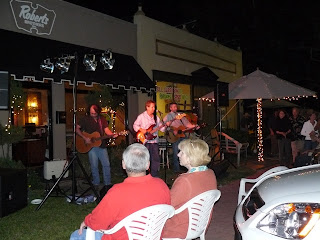 Somewhere I read that they named the town Fairhope, Alabama, saying it had a “fair hope” of becoming paradise…. A small group of people back in the late 1800s founded it. And it seems to have retained it’s old world “village” atmosphere.
I hadn’t been there in over forty years…or maybe, ever, actually. As a child I spent time at nearby Daphne every summer with my best friend’s family, learning to water ski, crab, play poker, and stupid stuff like accepting a dare to jump off one of the old battleships parked up the bay…
I’d been thinking about going the weekend of November 16-17 for the “Southern Writers Reading,” but I chose to explore on my on as an “add on” to my quick trip to the beach this past weekend instead. Now I want to go back. Real bad. Sitting outside this charming art gallery, listening to “The Relics” playing lots of original songs and great stuff by the Eagles and Bob Seager and others… watching the locals minging, their children playing on this Friday night “art walk” made me hunger for such a village. I know I know… we’ve got that in Memphis… I was just there last weekend, at the RiverArtsFest, right? But Memphis is far removed from the charm of Fairhope. 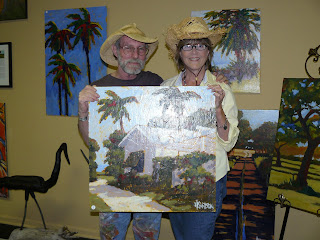 The artists do pretty well for themselves at these little galleries… I bought this piece by Bill Harrison (that’s him with me, holding the picture) that’s such a nice reflection of the cottages nearby and the colors and the looseness of the brush strokes seem to reflect the relaxed lifestyle. 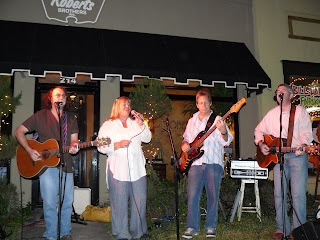 pretty much blew everyone away. Incredible talent here. A local gal. 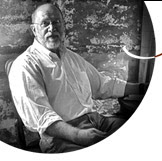 At one point, I was sitting in a lawn chair right in front of the band, when one of the band members looked right over my shoulder, gave a nod, and said, into his mic, “Hi, Sonny.” I turned around, following his gaze, and there was Sonny Brewer, (above, left) just minging with his friends and neighbors. sigh. I showed great restraint not to get up out of my lawn chair and blubber around trying to introduce myself and tell him I’m a writer and I wish I could come back for the writers weekend and… instead, I just smiled and acted like he was just everyday folk. (But if you’re a writer or just love Southern literature, you should try to go to this.)
What was it, exactly, that pushed all my buttons as I wandered the streets of 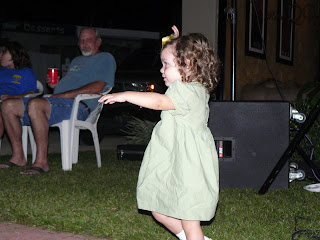 Fairhope on Friday night? Everyone seemed to know everyone… they were so connected. The people were bright and exuded a sort of creative energy and down-home charm and happiness. Like this little girl, who danced for about an hour. I found a couple of gals to dance with as the band churned out old Southern rock favorites (no pix of old women dancing, y0u’ll be glad to know!) It was hard to leave. I’ll be back. 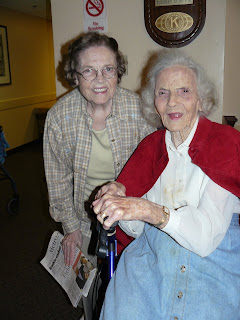 Driving through Mississippi from Gulf Shores the next day, I stopped in Jackson to visit my mom. This is her (in the plaid shirt) with her best friend, Elizabeth. They were just finishing a BINGO game when I walked in the front door. We replenished the birdfeed in the feeder just outside the window of her apartment, had coffee together, and I showed her my essay in skirt! Magazine. She loved it… moms are the best fans, aren’t they? Of course she especially liked it because it talks about her granddaughter, Beth, and her favorite son-in-law. My husband and my mom have always had a great chemistry. What a blessing.

Okay… if you’ve read this far and you’re still waiting for something literary, here it is: I picked up a paperback copy of Haven Kimmel’s (creative nonfiction) book, She Got Up Off the Couch recently. It’s about her mom. Haven also wrote the #1 New York Times best seller, A Girl Named Zippy, also a memoir… and I was already reading her novel, The Solace of Leaving Early. I have to admit I was finding the novel a bit slow, (probably just me being in a funk lately, the book is really good) but her creative nonfiction is amazing. And she’s such an unlikely hero, even in her own words:
So I wrote my essays with nothing much in mind and eventually there were

so many essays about nothing they made a book and then I don’t know what happened. I turned around one day and the book was taken on by a publisher and then it had a cover–and I am talking about the most unfortunate cover imaginable: me as a six-month-old baby, wearing a dress my mother made…. I called my editor and asked if she was serious and she said yes. Thus did A Girl Named Zippy skitter out into the world, and thus was my self-respect laid to rest. 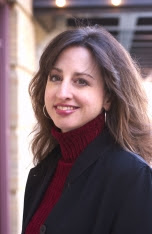 Haven was in Memphis signing her new book, The Used World, while I was in Greece, so I missed her. I’m not giving up on her fiction, which is really good… it’s just that I’m finding myself really really drawn to good creative nonfiction. And her book happened because she did just what Lee Gutkind taught us to do back at the creative nonfiction workshop in September: to write down stories every day and not worry about what’s going to happen about them at first. Just write.

I guess that advice could apply to writing fiction stories, too… and I hope to get back to that… but this literary nonfiction genre is pretty intriguing right now. I’m ready to finish up this essay I started on the beach….
Please share!