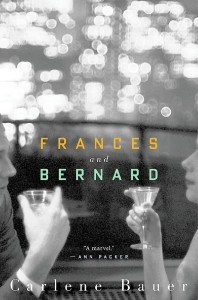 I’m reading a wonderful book, Frances and Bernard by Carlene Bauer, which is inspired by the friendship between Flannery O’Connor and Robert Lowell. This is not a book review, but if you’re looking for an excellent article on the book, read “The Irreconcilable Conflicts Within” by D. G. Myers. Or “To Talk To You In Letters” by Christopher Benfey.

What I’m after today has to do with O’Connor’s faith—and the way it informs her fiction—something I’ve been intrigued by for many years. So why don’t I stick with primary sources, like The Habit of Being: The Letters of Flannery O’Connor, and Mystery and Manners, both edited by Sally Fitzgerald? I keep both of these books near my reading chair in my office (I dislike the word, “office,” but it’s not really a studio. I usually just refer to it as “my room,” not to be confused with my bedroom, which I share with my husband.)

Wednesday evening I enjoyed a lively gathering of Memphis writers in the artfully appointed home of Suzanne Henley and Jim Cole—both gifted writers and artists. (Cole wrote The Death of Elvis.) At one point, as thirteen of us sat around the huge, square table Suzanne crafted herself, the discussion turned to genre and finding the right marketing for your writing. It was a diverse group, but as you might imagine with mostly Southerners, a number of people were writing—or have written and published—books with spiritual themes. Some are outright “Christian literature” and others are more generally “spiritual” than “religious.”

As I listened to everyone tell their stories, I thought of the things I’m gleaning from Frances and Bernard. At times I forget that the book is fictional, and I picture O’Connor herself writing these letters (which is a high compliment to Bauer.) Early in her friendship with Bernard, Frances says:

I am wary of projects that are described as spiritual. I fear—this is related to my aversion to artistic empty threats—that the more consciously spiritual a person appears to be, the less truly spiritual that person is…. I don’t ever want to feel touched or gifted spiritually Or sense God moving about on the face of my waters. What a burden! Everything would then have to live up to being knocked off a horse by lightning, wouldn’t it? I think I prefer to live at the level of what the British call muddle. Muddle with occasional squinting at something that might be called clarity in the distance, so as not to despair.

As I continue in my messy battle with God and forgiveness and Church, I find these words—and O’Connor’s actual words—comforting. From Mystery and Manners:

The fiction writer presents mystery through manners, grace through nature, but when he finishes there always has to be left over that sense of Mystery which cannot be accounted for by any human formula. 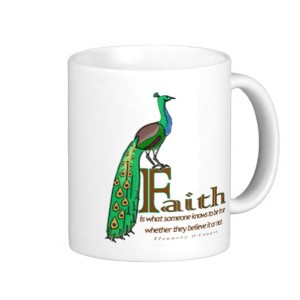 O’Connor defends that Mystery in a letter recorded in The Habit of Being, in which she responds to a comment made by Mary McCarthy (A Charmed Life) at a dinner party, about the Eucharist being merely symbol. O’Connor’s reply:

“Well, if it’s a symbol, to hell with it.” That was all the defense I was capable of but I realize now that this is all I will ever be able to say about it, outside of a story, except that it is the center of existence for me; all the rest of life is expendable.

So this is her center, from which she wrote her stories. Stories that were never religious or preachy. Stories that revealed humanity in some of the most concrete prose ever penned. Every day I want to write like O’Connor. But recently it’s not just her prose that I envy. It’s her faith. Her clarity. Her ability to grasp the one thing needful even when it is cloaked in a setting (parish, priest, people) that’s other than how she would envision it. Her childlike approach to the Mysteries, which I imagine her describing to Lowell, just as Frances wrote to Bernard:

I’m going to church at Our Lady of Peace, which is on Sixty-Second Street. There’s very little to recommend it other than it’s convenient. The organist pounds away like she’s at a Yankee game, which amuses me. The last time I went I saw the priest, making his way back down the aisle at the end of the Mass, give a little start and then purse his lips when the force of the first bars of the benediction clapped him from behind. I enjoyed that little hiccup of fallibility. But I don’t think I need anything from the other people around me. I’m there for the liturgy and the host.

Because it was the center of existence for her, she was happy living in the muddle (with occasional squinting at clarity in the distance, so as not to despair) and enjoying little hiccups of fallibility. She wasn’t compelled to try to change the Church, a parish, the priest, or the people. She wasn’t compelled to write Christian books to try to convert her readers. Nor am I. Again, through the fictional voice of Frances, she explains why she writes fiction: