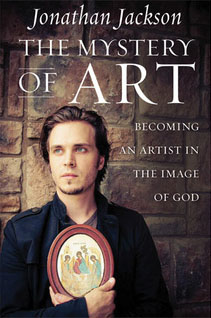 Back in February and March I did posts with reflections on Jonathan Jackson’s book, The Mystery of Art. If you missed them, you can catch up here:

“The Gift of Silence”

“The Mystery of Art”

Continuing in Jackson’s book today, I’m reading Chapter 6: “Art as Prophecy,” and Chapter 7: “Art as Sacrament.” Jackson isn’t referring to the kind of prophecy where one can tell the future. He’s writing about what he calls a prophetic destiny:

Every artist has been given a prophetic destiny. The artist has been given a substantial gift and responsibility: he is called to enter into the repentance of humanity, which ultimately leads to some form of resurrection and new life. In many ways, artists are the caretakers of the culture…. Plato is thought to have said, ‘Give me the songs of a nation, and it matters not who writes it laws.’

Recently I took a friend to see the icons at my church, St. John Orthodox in Memphis. This friend is agnostic, and we didn’t visit during a service, so she wasn’t able to take in the other physical/sensual offerings of the church—the chanting, the incense, the majesty of the colorful vestments worn by the clergy and altar servers. But she’s an artist and a writer, and she was struck by the beauty she saw, perhaps in a similar way that Prince Vladimir’s envoys were struck by the majesty of Hagia Sophia when they visited it and reported back that they “didn’t know whether we were in heaven or on earth.”

Icons are liturgical art. They are meant to transport the worshiper to heaven. Away from the dust and dirt and pain and suffering and pride and noise of every day life. In a similar way, the artist (which includes visual arts, music, drama, and writing) is tasked to transport the viewer, listener, or reader to a higher place. As Jackson says:

Whether in music, painting, writing, acting, or any other art, artists have a unique responsibility to become prophetic mirrors of the zeitgeist, all the while pointing to an eternal kingdom. The artist has been given the charge to assist in awakening the true hunger inside each soul.

This is a charge I accept with humility, as I am unworthy of such a high calling. But if I don’t accept it, my art is in danger of becoming self-serving and possibly even pornographic. It’s not that I want to create “Christian art.” In fact, much art that is overtly “Christian” (other than icons, which are liturgical) comes across as preachy. This is not at all what I’m after, nor what Jackson is writing about:

It is important to note that the artist is not in the business of moralizing or proselytizing. Some of his works of art may have overtly religious or spiritual themes; others may not. Contrived art for the sake of preaching to people is an offense to the mystery and sacredness of creation.

Many of my published essays contain elements of my faith and my spiritual struggles. My novel-in-progress contains graffiti and Abstract Expressionism as well as Byzantine and Coptic icons, one of which is weeping. I don’t separate my spiritual life from my art, but each of them informs the other, because we are sacramental beings. As Jackson says:

Traditional Christianity teaches that the whole world is a sacrament. This profound reality is transformative for artists. Artists are by nature sacramental. They instinctively believe in the mystery and spiritual nature of their craft.

As I continue to hone my craft by writing new essays, organizing an anthology, and revising a novel, I do this work with Jackson’s words in mind:

Man, in all of his broken madness, is brought into the holy madness of Christ. Story is the fictional battlefield where we witness the unfolding drama of man’s freedom and longing: his darkness and luminance: his fall and redemption.

As I watch Jackson’s portrayal of his character in the television show, “Nashville,” each week, I find myself observing how he brings these elements to his work. And I return to my work with a humble sense of my calling as an artist to be a caretaker of the culture. Big shoes to fill, and I know I fail at this work daily, but it’s what I do. Thanks for reading.

1 thought on “Faith on Friday: Caretakers of the Culture”