I was so excited yesterday when my friend, Sheila Vamplin, sent me a link to this article in First Things about graffiti artists painting icons in the dome of a church in Spain. So intrigued that I clicked through to this expanded article in The World, “Spanish Priest Commissions Graffiti for Church.” And then I found this video, showing the artists at work. (Wish I understood Spanish so I could hear what the priest and the graf writers are saying.)

This makes me happy on so many levels.

As an Orthodox Christian and (retired) iconographer, I was taught to respect the rules that my faith sets down for liturgical art, including icons, music, and architecture. Without those guidelines, these ancient, traditional forms would gradually morph into something entirely different. Eastern (Byzantine) traditions would become “Americanized” over time. There was a time when I thought that was a bad thing. I no longer feel that way. After all, I live in America. I am an American. Its culture is my culture. It’s been very difficult to assimilate the culture of the Middle East into my religious experience as a convert to Orthodoxy.

When I was writing icons, I had a discussion with Mother Gabriella, a Romanian abbess at Holy Dormition (Orthodox) Monastery in Rives Junction, Michigan. I was struggling with the strictness of both the styles and techniques taught by the Russian iconographers at the classes hosted by the monastery. I had also studied under Greek, Romanian, Ukrainian and American instructors, and it seemed that each “school” of iconography had its own set of rules. Mother Gabriella encouraged me to just “pray and paint” and let the style develop organically. She didn’t believe there was anything more spiritual about one technique than another. Or that one medium is more spiritual than another. Some iconographers believe egg tempera is the only true spiritual medium for icons, looking down on those who paint with acrylics. I found great relief in the large berth she gave to liturgical art.

So when a Catholic priest in Spain reached out to two graffiti writers he found online (“Rudi” and “House”) and asked them to paint the iconographic images for the dome of his church last year, he incorporated yet another element of his culture—graf writers are counter-culture. (See “God’s Own Banksy.”) And they would be painting the icons with the only tool of their craft—spray paint. (Interesting note: both graffiti artists and iconographers use the term “write” when talking about painting graffiti or icons.)

L’Hospitalet’s Santa Eulalia church is neo-Romanesque in design, with a Catalan twist. Father Ramon Borr has this to say about his choice of “iconographers” for the dome of his church:

“Even though the press is scandalized by graffiti artists, for me graffiti is just another artistic technique.”

I would love to meet Father Ramon and thank him for this bold move on his part. And to see these icons in person. I’m amazed by the skill the graf writers showed in the precision of the lines they achieved with spray paint. Since I researched graffiti for my novel, Cherry Bomb, I learned just enough to respect how difficult it is to achieve such precision. The article in The World says:

One of the two ‘graffiteros’ was Raul Sanchez, who’s tag, or signature for street art, is House. House said that when Father Borr hired him he was surprised, and nervous, and thrilled.

“Only a graffiti artist can tell we used aerosol cans to do the work,” he said by telephone from Alicante. “We tried to conceal that. In the Roman period spray paint obviously didn’t exist.” 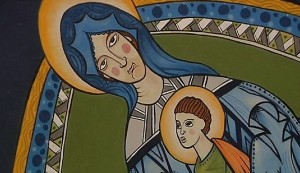 Just like acrylics didn’t exist during the Byzantine era. The graf writers studied the Romanesque style in Barcelona before they began painting in the church. They respected the liturgical guidelines, but they brought their own creativity to the work.

My favorite “style” of iconography is that used by the Coptics. The simple, primitive figures and the bold colors have a spiritual element that reaches my soul in a different way from the Byzantine icons. A few years ago I took a workshop at an Episcopal Church in Memphis during which we learned to do “reverse painting” on glass. We transferred Coptic images to the glass by tracing the outlines with Sharpie pens and then filled in the colors—from back to front—with acrylic paint. I gave my icon away as a gift, and I’m sorry that I don’t have any pictures of it.

But my Goddaughter, Sophie, and I had fun doing some Ethiopian folk art painting together on her birthday three years ago.  (She’ll be ten on February 25!) We used gouache—opaque water colors—on canvas, with pleasing results. Sophie was only seven at the time. This painting isn’t an icon, but you can see the primitive style of the symbolic images that also appear in Ethiopian icons.

I hope you enjoyed my peek into the diverse cultures of iconography and graffiti. I’ve only got a few days left here at my writing “retreat” on the beach. Can’t wait to see what the women in The Secret Book Club are reading next! Have a great weekend, and please come back on Monday for my mental health post. 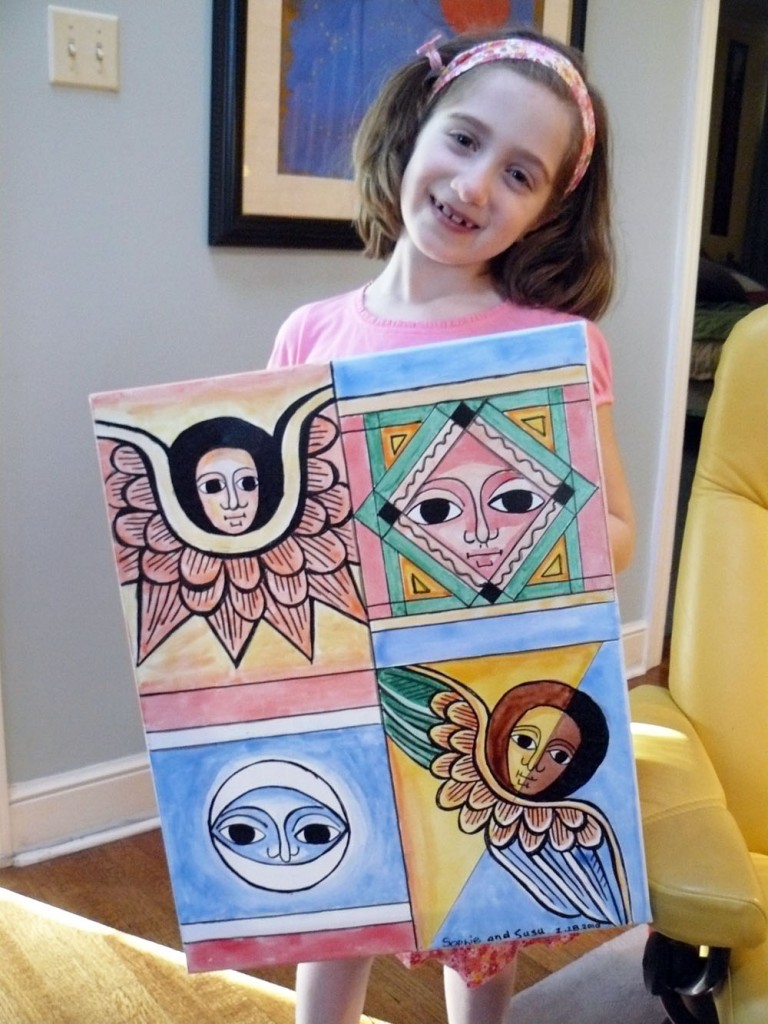