This morning after my Morning Prayers I picked up one of my favorite “devotional” books to read for a few minutes. It’s Scott Cairns’ book, Compass of Affection: Poems New and Selected. Another favorite author of mine, Mary Karr, says that poems are prayers for her. King David certainly felt this way as evidenced by the way he poured out his heart in Psalms. So this morning I reached for these poems again.

Two of Scott’s poems spoke strongly to me. In “Icons,” he reminds us of how this incarnational art form can help us pray:

As windows go, these ancient

our rapt attention and announce

We look to them to apprehend

a glimpse of life enduring

out of time; and likewise find

our own experience attended

by a tranquil gaze that turns

indulgent, kind. The stuff of them

—the paint, the wood, the lucent

in favor of how good

all stuff remains despite our long

meager views of body and its

anima. On his knees, the pilgrim

leans into another mode of being,

leans into the stillness

at the urgent source of life.

On his knees the pilgrim meets

the painted gaze, and finds his own

Rapt attention. Glimpse of life enduring. A subtle reciprocity. Another mode of being. The icons do, indeed, lead the pilgrim on his journey to commune with God.

And then I read another of his poems—this time a longer one—“Memento.” I won’t quote the entire poem here, just a few lines that caught my attention as I drank my first cup of coffee:

The icons of the several saints I love the most

create a vivid gallery—if one in that word’s

rare sense, wherein the blessed reposed within its arc

are the crew in best position to comprehend 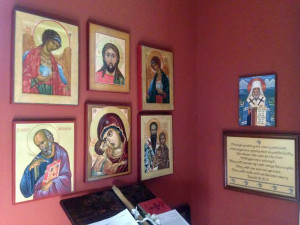 I’ve done the same with my icon corner, which happens to contain mostly icons I’ve written myself, except for two—the one of Saint John the Evangelist and Theologian and the one of Saint Innocent. Each were special gifts and I treasure them both. The icons of Holy Archangels Michael and Gabriel (top left and right) were the first two icons I wrote. The icons of Christ and the Mother of God were each done at different workshops where I was exploring various styles. And the “marriage icon” of Saints Basil the Great and Mary of Egypt is one I wrote as a gift to my husband on one of our anniversaries. Had we been Orthodox at our wedding, we might have received this icon that contains each of our patron saints.  And so I stand and say my Morning Prayers and (sometimes) my Evening Prayers with this vivid gallery of witnesses surrounding me. And yet my attention often wanders as I begin to think of everything I want/need to do that day. As Cairns says in “Memento”:

…These surround the shallow altar

where I say my prayers and, if I’m lucky,