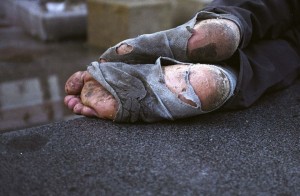 This time of year many people are looking for ways to help others. We sometimes refer to the Christmas season as the “season of good will.” A few years ago, I blogged about my favorite activity during the season here, and here—Christmas caroling to the residents at Kings Daughters and Sons Nursing Home. (I’m sad to be out of town for it this year, but I know it will be a blessing to everyone—carolers and listeners.) And of course millions of people have seen the picture of the New York police officer giving a pair of new boots to a homeless man this past Tuesday. (The man didn’t know a tourist was photographing him.)

My friend and neighbor, Ellen Morris Prewitt, works with homeless and previously homeless people in a writing group here in Memphis through an organization known as Door of Hope. Some of their work was recently published in The Advocate: A Voice of Experience. Like this essay, by Jockluss Thomas Payne.

Just Buy the Beggar a Beer

When people ask me for money in front of a grocery store, I usually recoil. If you bum enough quarters, you’ll soon have enough for a beer. I pontificate on misery. It’s a daily routine. Bum change and buy beers. Many street people have made this their daily occupation. Sometimes I will give some change to hustlers and sometimes I won’t. It’s according to how I feel in a particular day, I guess. When I was homeless I worked at temp services and always had some sort of income. I never stood in front of the grocery stores and bummed change. An upstanding tramp I was. I do feel some compassion at times and will part with a dollar or more. Or just buy the beggar a beer. I know what he’s after. I could have been the same way myself. But by the grace of god I survived. I don’t like enabling street people to get drunk. At the same time I feel that drunkenness is their only solace from a miserable life. The same as mine was.

And yet another member of the writing group, Veyshon Hall—who used to be homeless—disagrees with Payne. This is her essay:

I have given people money who were panhandling. That was before I realized what some of them do with the money. I hear people say that thy are responsible for blessing others with the money, not what they do with it. I feel differently. When I know they are going to buy drugs or alcohol, I am enabling them. I know because I used to be one of them. I also feel bad knowing that a drink or drug I helped pay for may be the one that kills them. There are places to get food, clothes, hygiene products and shelter for free. There is even a free doctor and medication. Anyone who spends all day panhandling has the sense and energy to do a job. Too often I hear people say they won’t do a job sweeping or mopping, but those same people think it’s o.k. to panhandle. Panhandling should be a job so they can pay taxes and help our economy. Let’s see how many career panhandlers we would have then. 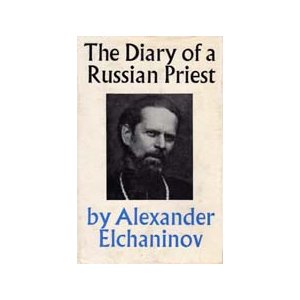 I know there are “two sides” to every argument, and I really don’t like to argue. I prefer a non-judgmental exchange of ideas. So, I’d love to hear your thoughts on this topic. But first, I’ll close with a quote from a favorite book, The Diary of a Russian Priest, by Father Alexander Elchaninov.

“Some do not give alms, saying: it will be spent on drink, and so forth. Even if it is spent on drink, the sin is less serious than the anger we provoke by our refusal, and the harshness and condemnation which we cultivate in ourselves.” 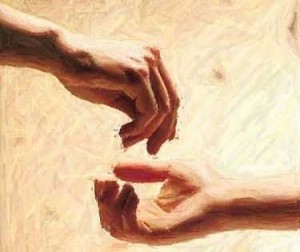 I’m off to Athens, Georgia, this weekend, for my eighth and final event (since July) for Circling Faith: Southern Women on Spirituality in 2012. I’m looking forward to seeing co-editor, Wendy Reed, again, and to meeting one of my fellow contributors, Barbara Taylor Brown, at the reading/signing at Avid Bookshop on Saturday. Have a great weekend, everyone!

6 thoughts on “Faith on Friday: Just Buy the Beggar a Beer”