I’m off to Jackson (Mississippi) to visit my mother in the nursing home today, so I don’t have much time to blog today. But as we enter the final days before Pascha, I wanted to share something significant about this journey. As usual, Father Stephen Freeman provided the fodder and I’m quoting from his blog for this post.  It’s about Holy Week… which begins in a few days for Orthodox Christians. The whole post is worth a read, but I’m going to share only the section from Saint Gregory of Nyssa, who said these words to his people as they approached Holy Week:

If you are a Simon of Cyrene, take up the Cross and follow. If you are crucified with Him as a robber, acknowledge God as a penitent robber. If even He was numbered among the transgressors for you and your sin, become law-abiding for His sake. Worship Him Who was hanged for you, even if you yourself are hanging; make some gain even from your wickedness; purchase salvation by your death; enter with Jesus into Paradise, so that you may learn from what you have fallen. Contemplate the glories that are there; let the murderer die outside with his blasphemies; and if you be a Joseph of Arimathæa, beg the Body from him that crucified Him, make your own that which cleanses the world. If you be a Nicodemus, the worshipper of God by night, bury Him with spices. If you be a Mary, or another Mary, or a Salome, or a Joanna, weep in the early morning. Be first to see the stone taken away, and perhaps you will see the Angels and Jesus Himself. Say something; hear His Voice. If He says to you, “Touch Me not,” stand afar off; reverence the Word, but do not grieve; for He knows those to whom He appears first. Keep the feast of the Resurrection; come to the aid of Eve who was first to fall, of Her who first embraced the Christ, and made Him known to the disciples. Be a Peter or a John; hasten to the Sepulchre, running together, running against one another, vying in the noble race. And even if you be beaten in speed, win the victory of zeal; not looking into the tomb, but going in. And if, like a Thomas, you were left out when the disciples were assembled to whom Christ shows Himself, when you do see Him do not be faithless; and if you do not believe, then believe those who tell you; and if you cannot believe them either, then have confidence in the print of the nails. If He descend into Hell, descend with Him. Learn to know the mysteries of Christ there also…. And if He ascend up into Heaven, ascend with Him. Be one of those angels who escort Him, or one of those who receive Him. Bid the gates be lifted up, or be made higher, that they may receive Him, exalted after His Passion…. 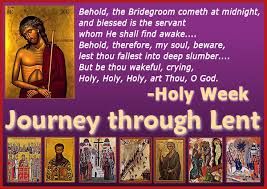 Learn to know the mysteries of Christ. So here we go again… At Saint John, our parish here in Memphis, we have services every day for the next ten days, and two to three services on some days. Pascha (Easter) is May 1. I’ll be back next week with more reflections, God willing.