There are not many things you can change within the Orthodox Church. And I appreciate that when it comes to matters of doctrine/faith/belief. The Orthodox Church upholds apostolic truths handed down through the centuries by church fathers, protected by creeds and canons, some of which were hotly debated at historic church councils. I get that.

But sometimes I get frustrated with the method of delivery. Especially when it comes to liturgical music. I’m not talking about the words—they are full of Holy Scriptures and patristic writings that teach and uplift us. But sometimes the melody isn’t so uplifting. Sometimes—whether it’s sung by an accomplished choir or chanted by one or two practiced chanters—the melody is so foreign that it hinders my participation. It’s hard for me to pray if the music or chanting are difficult to relate to—sometimes even delivered with a foreign accent by an English-speaking American. I am not Arab. Or Russian. Or Greek. I’m just a gal from Mississippi who landed in a church with a rich and varied history.

There are eight “tones” in liturgical Orthodox music, which must be followed, along with other guidelines. I’ve been Orthodox long enough (27 years) to recognize most of those tones, especially when they’re done in the Slavonic tradition. I think they are more difficult in the Byzantine style. Both can be beautiful if done well. But they just don’t reflect the culture in which I live, here in the Southern part of the U.S. 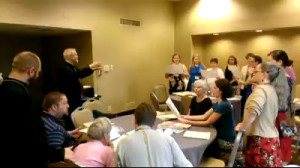 Enter the good people at the All American Council of the Orthodox Church in America, which met in Atlanta in July of 2015. During the Council, a choir workshop was held in which the participants learned a new setting for the traditional Paschal (Easter) troparion (hymn). It’s Appalachian. As Father Ernesto Obregon said in this article in “The Sounding” (a blog within the Orthodox Christian Network):

While I know that there are various melodic traditions that have entered what became the USA, I think that the Appalachian religious harmonies lend themselves quite well to adjusting themselves to the tonal traditions that we have received from the various jurisdictions.

There’s a video within the blog post, which shows the Appalachian version of the Paschal hymn. I can’t figure out how to link to it, but it’s easy if you click on the blog post and then on the video.

Appalachia is not my region, but this gives me hope that something similar could happen in the Mid-South. As Father Ernesto says:

When we compose musical settings of the Divine Liturgy that both respect and honor what we have received, yet express it in melodies and harmonies with which we grew up, we contextualize the Church in the same way that we do when we adjust the language of the Divine Liturgy to the language that is spoken by the people of a particular country. When the music we hear matches our heart music, it is easier to hear and understand the words that are being chanted.

That’s what I’m after. Joining heaven to earth. Or in Father Ernesto’s words, “contextualizing the church”—especially the liturgical music—so that it matches our heart music! Maybe we’ve made a baby step.

2 thoughts on “Faith on Friday: Matching Our Heart Music”