(Friday’s post is one day late due to illness….) 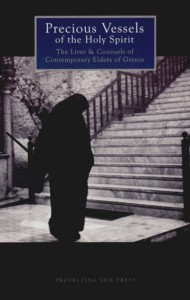 On Thursday I went to a monthly gathering with some of the women in our parish who are studying Orthodox patristic writings. The study is led by our pastor, and the current book being read is Precious Vessels of the Holy Spirit: The Lives and Counsels of Contemporary Elders of Greece. (You can read an introduction here.) There were a few reviews on Goodreads that I found interesting, especially one from a priest who said the book “represents a piety and wisdom that doesn’t speak to me.” I loved his honesty. So much patristic literature—especially in the monastic realm—can be difficult (or even inappropriate, in my opinion) for the non-monastic Christian. After reading about 50 such books back in the mid ‘90s (during my “nun phase”) I took a break from such heavy asceticism.

But in our reading yesterday, which was about Elder Epiphanios (1930-1989) of Athens, who founded the Monastery of the Most Graceful Mother of God in the Peloponnese, of which he became abbot, we saw a “softer side” of this beloved elder, who said, in his “counsels”:

I want whoever is near me to feel that he has room to breathe, not that he is suffocated.

My heart only has entrances. It doesn’t have exits. Whoever enters remains there. Whatever he may do, I love him the same as I loved him when he first entered my heart.

My worst hell is to realize that I have saddened a beloved person.

What a beautiful image of unconditional love and forgiveness.

Forgiveness has been on my heart a lot lately. I saw a beautiful example of it in the movie, “Philomena,” which I went to see with four other adoptive mothers. (And I didn’t think it was a “hateful and boring attack on Catholics,” as did Kyle Smith in the New York Post.)

And again over the past few days as there has been so much media coverage of Nelson Mandela’s life and death. Another amazing example of forgiveness. 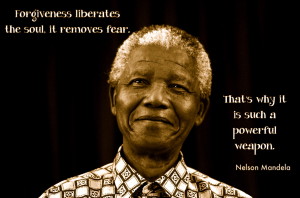 Having survived a life-threatening car wreck just over five months ago, I think about forgiveness more and more. I work to let go of grudges and to forgive those who have hurt me. But also to ask forgiveness from those whom I have hurt.

I want my heart to only have entrances.