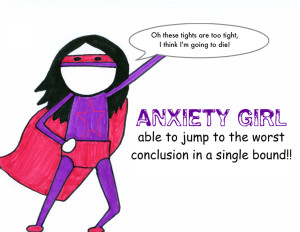 As a little girl I had trouble sleeping. I was what my parents called a “worry wart.” When my head hit the pillow at night my mind would fill with negative thoughts that often kept me tossing and turning. On top of that, once I fell asleep I often talked and walked in my sleep. I can still remember the terror of waking up in the middle of one of these episodes and banging my hands on the four walls that felt like they were closing in on me (I’ve also always been claustrophobic) only to finally wake up to discover I had walked into my shower and closed the door behind me!

According to the National Institute of Mental Health (NIMH), anxiety is a normal reaction to stress, and can even be beneficial. It’s only when it becomes an on-going problem that we should really be concerned.

So where does faith come into the picture? Prayer sometimes helps. I say “sometimes” because it isn’t magic. It’s about the heart resting in the nous before the loving embrace of a compassionate God and believing He will help me get through whatever is before me. Last night the prayer helped. I fell asleep fairly quickly, feeling my racing heart slow as I said the words, “Lord have mercy,” over and over, taking deep, slow breaths to calm the anxiety.

If you’ve read this far you must be wondering what I was (and still am) anxious about. It’s a problem I’m having with Medicaid. For several years now they’ve been making up the difference in Mom’s Social Security and retirement income and the cost of living in a nursing home. But a few months ago Mom received a small check as part of an inheritance from some family property that sold down in Mississippi. I knew the check would cause problems, but I had no idea how much. Because I failed to report the income immediately (I did report it a couple of months later—I wasn’t trying to hide it) Medicaid is saying that Mom must repay Medicaid for the months that she was “ineligible” because of the inheritance money. On top of that, her ineligibility has caused her to go on “private pay” at the nursing home until she gets re-accepted for Medicaid. The bottom line is they want her to pay over $11,000 for those three months. The total inheritance money she received for the property was just over $4,000. She doesn’t have enough money in the bank to cover the repayment. She barely has enough to make next months’ private pay payment.

I’ve left two phone message at the Medicaid office in Jackson for the person who sent the letter but haven’t heard back. It’s a helpless and scary feeling. One that can easily produce sleepless nights and trigger unhealthy soothing options like overeating, which I’ve already been struggling with all week. 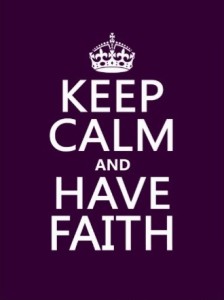 Hebrews 11:1 says that faith is “the assurance of things hoped for, the conviction of things not seen.” Sometimes it’s easier for me to have faith about more abstract issues like the existence of God and Heaven than a solution to Mom’s financial woes. And really they’re my woes, not Mom’s, since she has no idea what’s going on as she lives in her little Alzheimer’s-produced world. Me? I’m going to try to continue to pray, not eat everything in the house, and write a letter to the Mississippi Office of Medicaid….

4 thoughts on “Faith on Friday: The Assurance of Things Hope For…”