Numerous people have asked me if I am nervous about driving again, since my wreck back in July was so traumatic. During the weeks and days leading up to my maiden voyage this past Monday night, I really haven’t known how it would feel. I wasn’t nervous about it on the front end. And, thankfully, from the first drive home from the car dealership Monday night to my solo outings on Wednesday and again this morning (I drove to physical therapy!) I have not been nervous or afraid. It has felt like a gift. And I believe that’s what it is. The gifts of life and mobility, both of which I could have so easily lost on July 7. 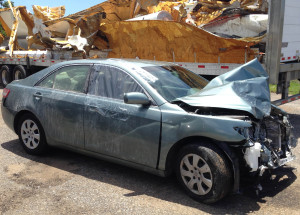 I’ve heard of people who had a hard time getting back behind the wheel after a horrific wreck, and I can understand that, even though that hasn’t been my experience. I’ve been trying to figure out why this part of the journey has been so easy.

One reason, I believe, is that I don’t have a clear memory of the moment of impact. It was dark on that country road that intersected with Highway 98, and as I turned too wide into the oncoming lane, I never saw the ambulance. It wasn’t carrying a patient, so there were no bright lights and sirens going. I think I was trying to read my GPS and drive at the same time…. Something I’m determined to be vigilant about now. (I’ve also got a built-in big screen for the GPS in my new Venza, whereas before I had a small, portable Garmin on the dashboard.)

I also don’t have any memory of being in pain right after the accident. I don’t know if this is due to being in shock, or God’s grace, or both, but even when I could hear and respond to all the good people who were taking care of me—as they told me they were cutting my jeans off, transporting me to the ambulance, into the hospital, to xray, MRI, and finally prepping for surgery—I never felt any pain. 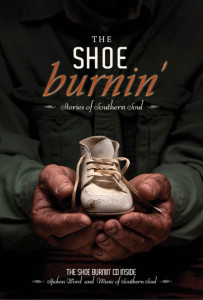 On November 9 I’m returning to Fairhope to speak at the Penster’s Writing Group. And while I don’t plan to visit the intersection where the accident occurred, I’m not nervous about being down in that neck of the woods. I’ve got good friends who live in Fairhope and in Waterhole Branch, where I was visiting the night of the accident. The next day, some of the contributors to the Shoe Burnin’ Anthology: Stories of Southern Soul participated in a video shoot to promote the book, which TODAY is AVAILABLE FOR PRE-ORDER! Watch the video here, and pre-order copies of this wonderful book as Christmas gifts! It will debut on November 2 at the Louisiana Book Festival.

So, no, I don’t have nightmares associated with the wreck. This is truly a gift from God, and I am eternally grateful.