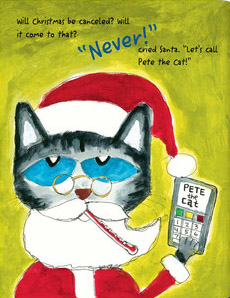 I’m sure everyone has seen the news about the billboard put up by the American Athiests depicting a young girl in a Santa hat writing a letter to Santa saying, “Dear Santa, All I want for Christmas is to skip church! I’m too old for fairy tales.” Memphis is one of five cities (Nashville is included, and Fort Smith, Arkansas—both a stone’s throw from where I live) where the billboards will appear, so I’m sure one of them will be in my face eventually. Am I sad? Goodness, no! (as Pete the Cat says) I’ll just keep walking along and singing my song…. (Pete is my granddaughter Gabby’s favorite new book character… and mine, too!)

Today my song comes from an Orthodox Archimandrite Roman Braga, who serves the nuns at Holy Dormition of the Mother of God Monastery in Rives Junction, Michigan. His article in the Winter 2014 monastic journal, The Burning Bush. Here’s a short excerpt:

We must understand that the Nativity is a historical fact; it is not a mere hypothesis open to speculations. Simple Christians did a much better job—they clothed this Feast in poetic folklore only to keep this mystery fresh and not dried up by theological reasoning. The theology of simple people is contemplation, prayer and singing, and in this way they are much closer to the Truth.

Later in the article Father Roman tells us who Christmas is for:

Christmas is for simple and wise mothers who are silent and humble….

Christmas is for fathers who with calloused hands daily make a commitment… to protect their families….

Christmas is for countrymen, for shepherds and workers….

Christmas is for the poor….

Christmas is for the rich….

Christmas is for the ill and lonely, for the abandoned and destitute….

Christmas is for wise Christian philosophers an object of adoration and not a speculation….

Christmas is the gift of God for everyone, children and grownups, sinners and saints, angels and stars, shepherds and magi, and even for inanimate things, because God revealed Himself in the flesh and all nature was imbued by Him.

Whether or not atheists chose to skip Christmas is their business.  Me? I’m just gonna’ keep walking along and singing my song….

4 thoughts on “Faith on Friday: The Theology of Simple People—Contemplation, Prayer and Singing”