I’m not even going to comment on the Convention here, except for the final event of the evening—the Benediction, given by New York Cardinal Timothy Dolan.

Joseph Zwilling, director of communications for the Archdiocese of New York, says that the cardinal’s appearance is purely nonpartisan:

“It’s not an endorsement. It’s as a priest going to pray.” 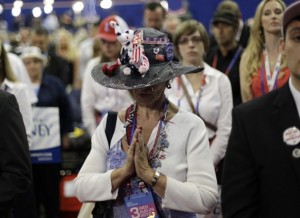 And perhaps to prove his point, Cardinal Dolan will also be praying at the Democratic Convention next week.

His prayer was my favorite part of the evening. It reminded me to put first things first. (And you gotta love this woman’s hat!)

Watch and listen to Cardinal Dolan giving the benediction here.

Join him in prayer, if you are so inclined. Only takes 4 minutes.

I’ll leave you with a little “American graffiti.”