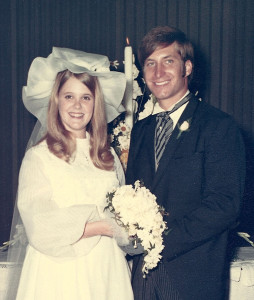 My brother, Mike Johnson, was head groomsman (just home from a deployment to the Philippines, wearing his Marine Corps dress blues) and we had eight bridesmaids and eight groomsmen. Well, counting a Matron of Honor (Kathy Moore Kerr), a Maid of Honor (Jan Connors) and a Best Man (Tod Cushman). The bridesmaids ranged in age from 15 to 19. I had just turned 19 three months before the wedding. Most of the groomsmen were respectably in their twenties.  (Bill and I were 17 and 19 when we started dating.)

We’re still in touch with many of our wedding attendants, although we only live in the same town with one of them—Troy Mashburn, who is pastor of the church where my husband serves as associate pastor. (Who knew, when these men were pursuing their degrees in business and medicine, and later their secular careers, that they would end up serving together as priests in the Orthodox Church?)

My cup runneth over as I think of the blessings—and the struggles—of these 45 years. We lived the first 18 of them in Jackson and the next 27 in Memphis. We adopted three children, and had at least one of them living at home from 1977-2001 (with a couple of extended boomerang visits since then).

We’ve travelled together to many states including Alaska and Hawaii, and also to Australia, Canada, England, Italy, Germany, Monaco, Greece, the Czech Republic, Austria, Mexico, Bermuda and the Bahamas. What’s left on our “bucket list” for travel? Paris! It didn’t work out to go this year, but we’re hopeful for 2016.

What have we learned during these forty-five years of married life? (This is my blog, so I guess I can only speak for myself. I’m sure Bill would have a lot more to say!) A few reflections:

Love is something you decide to do. It’s not an emotion, although it’s wonderful when the feelings are also there. 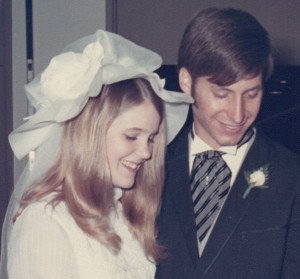 Love can’t last without forgiveness. We are fallen human beings and we are going to hurt each other. But forgiveness can enable us to heal and move forward.

Trials can either make or break a marriage. When I survived a life-threatening wreck two years ago next month, my husband became the most amazing caregiver anyone could want. I feel back in love with him all over again. During the months that I was essentially house-bound, I waited eagerly for his return from work each day. The best part of my day was when he would bring our supper into my office (where I was sleeping on a hospital bed) and sit in the chair beside me and eat with me and tell me about his day. I felt like we were newlyweds in many ways.

Your spouse can’t always be your best friend. I think women especially need best friends. My best friends aren’t in any way a threat to our marriage. They strengthen it.

A marriage isn’t made up of two halves. It’s two wholes. Each person in a marriage needs room to become the complete person we’re meant to be. Only then can we bring our whole selves to the relationship. I think this is especially important for wives who traditionally have seen their role as somehow “completing” their husband and being completed by him.

When I started writing this post I thought it would just be a paragraph or two and then I’d include a lot of photos from our wedding. Guess I’m just in a reflective mood. And happy and thankful to have shared 70% of my life with this wonderful man.

8 thoughts on “Family on Friday: 45 Years—What Have We Learned?”