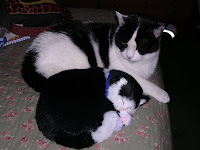 In the three days since I’ve been home from the writers’ conference in Mississippi, no less than three people have told me I’m more than a little wired. Even my cat Oreo has picked up on my buzz, following me from room to room, hopeful that I’ll settle down and hang out with her again soon. Finally I moved her special “stool” into the office near my computer so we could at least feel eachother’s vibrations. Oreo is either 18 or 19, I forget which. Here she is with Baby Oreo who isn’t real, and who now lives with my mother in an assisted living home in Mississippi. Baby Oreo has a battery inside and when you pet her tummy it moves up and down like she’s really purring. I know, it’s pretty scary, but my mom loves cats and she’s allergic to them and her apartment is tiny and this way there’s no smelly kitty litter or holes scratched in the furniture or food to buy or anything. No, she doesn’t talk, but I guess you get what you pay for.
By now the observant reader is wondering what Oreo has to do with “First Impressions.” I can’t think of a thing right now, but I’ll get back to you on that later if I do.
One of the many helpful things that went on at the writers conference last weekend was a session led by Joshilyn Jackson called “First Impressions.” And another session on “First Pages,” led by Sean Ennis. That’s because these talented writers know how important it is to “hook” the reader, or the agent, or the editor, or the publisher … asap. Of course I came home and re-worked the first line, first paragraph, and in some instances, first page, of several short stories I’ve got in the hopper as well as the opening lines of every chapter of my novel. (Did I mention that I’m a little buzzed?)
So … just for fun I thought we’d try something. I just pulled six books off the shelves in my room and I’m typing up their “first lines” below. If you think you know the book or the author, send your answer in a comment. No Googling the phrases, guys –you’re on the honor system here. Whether you’re a writer or just an avid reader, you can think about how/if they hook you. And … I threw a couple of wild cards into the mix (from my own works in progress) just to make it interesting. Can’t wait to read your comments–just number your answers like the quotes.
Name the Author and/or Work for these Famous and Not Yet Known First Lines:
1. “When I was little I would think of ways to kill my daddy. I would figure out this or that way and run it down through my head until it got easy.”
2. “My wound is geography. It is also my anchorage, my port of call.”
3. “In the middle of my marriage, when I was above all Hugh’s wife and Dee’s mother, one of those unambiguous women with no desire to disturb the universe, I fell in love with a Benedictine monk.”
4. “Southern women wear their grief like their clothes, with a kick-ass style that enhances their mystique while camouflaging their pain. They’ve been raised to keep up appearances.”
5.”I am old now and have not much to fear from the anger of gods. I have no husband nor child, nor hardly a friend, through whom they can hurt me….Being, for all these reasons, free from fear, I will write in this book what no one who has happiness would dare to write.”
6.”The war began thirty years, nine months, and seven days ago, when I was deaf and blind, floating silent and serene inside Hazel Crabtree.”
7. “Emily’s mission was fueled by a 130-year-old family secret. Her first exposure to this secret came pulsing out of a brand-new black-and-white RCA television set in 1955, when she was only nine years old. Gathered in the living room of their small house in Houston, they could have been any American family tuning in for the first time to the electronic images which began to pour into homes all over the country in the 1950s. But they weren’t just any family.”
8. “I was born twice: first, as a baby girl, on a remarkably smogless Detroit day in January of 1960; and then again, as a teenage boy, in an emergency room near Petoskey, Michigan, in August of 1974.”
On your mark. Get set. Go! (I’ll check back in later and see how you’re doing!)