>Boo! I guess these guys don’t look all that scary… 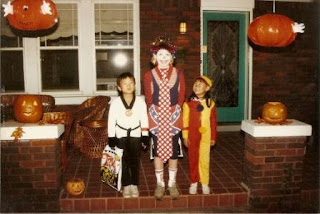 which was intentional on my part. It was my kids’ first Halloween in Memphis, twenty years ago today. But it was also their first Halloween to go trick-or-treating, ever, although they were 7, 11 and 5. So, what’s up with that?

The group that we were part of on our journey to the Orthodox Church wasn’t too keen on Halloween. In fact, we pretty much believed it was evil. We weren’t alone in our belief. Over the years, many groups and individuals have rejected the holiday, or found ways to entertain their kids in other, healthier pursuits.

Here’s a short video about the history of Halloween, for those sitting at their desks at work wishing it was quitting time:
And another video about how Christians tried to reform Halloween over the years: 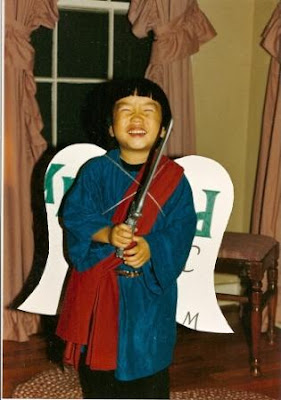 Our group celebrated “All Saints Eve” as an alternative. The kids (and sometimes the adults) dressed up as saints. Here’s Jason, as Holy Archangel Michael, back in 1985, when he was four. (Beth would arrive from South Korea just four days later, so she’s not in these pictures.) 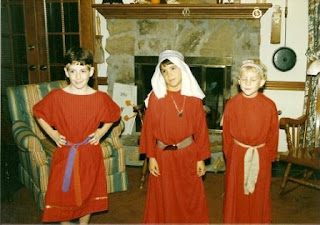 And here’s Jonathan, when he was eight, with two of his friends… I can’t remember which saints they were.

So, we let the kids trick or treat until they outgrew it, and we gave out enough candy to feed all the poor in Memphis for a few years. Our street was so popular that parents brought their kids from other neighborhoods by the van-loads to enjoy the relative safety and generosity of the folks on Stonewall. 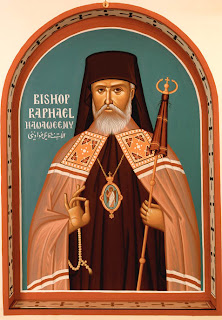 But we won’t be home giving out candy to trick-or-treaters tonight. Tonight we’ll be praying Vespers for St. Raphael Hawaweeny of Brooklyn at St. John Orthodox Church in midtown Memphis. Preparing for the Feast tomorrow morning, with the Divine Liturgy at 9 a.m. and a brunch afterwards. It will be a special day for me, as my dear friend Sue is being Chrismated, and she has asked me to be her sponsor. I’m trying to prepare for that event today with fasting and confession. It’s an awesome responsibility, one of which I am not worthy, but one I accept with joy. One source on this topic does a good job of explaining The Historic Role of the Godparent in the Orthodox Church:

The institution of sponsors (god-parents), who serve as witnesses and guarantors for the faith of the person being baptized and are obligated to edify him in the rules of Christian life, has existed since the first century of the Christian era. Church literature of the second suggests that the sponsors of the first centuries were usually deacons, deaconesses, hermits, virgins, and in general persons dedicated to the service of the Church and thus capable of edifying the newly-baptized in the truths of the Christian faith and its ethical principles. According to the “Apostolic Canons” (3, 16), a male Christian was obliged to take one deacon, and a woman one deaconess as sponsor. This practice has been maintained in the Church ever since, i.e., a person baptized is required to be sponsored by one person of the same sex. According to the Rudder (ch. 50, pt. 2), the person baptized, “when he leaves the saving bath, must be received by one faithful person.”

If you want to know more about Saint Raphael, you can read an overview of his life and a list of the thirty parishes he founded in North America here . One of those parishes was St. George in Vicksburg, Mississippi, in 1906—they celebrated their 100th anniversary as a parish two years ago!

And… twenty years ago this past March, my family, along with about eighty others from Jackson and Memphis, were Chrismated into the Orthodox Church at that parish in Vicksburg.

So, today I won’t be buying Halloween candy. I’ll be trying to fast and pray while preparing breakfast casseroles and cheese grits for tomorrow morning’s brunch… not an easy task for this lover of all things yummy. And I’ll be remembering twenty years of blessings for which I am so thankful today. And asking God’s blessing on my family, including my Godchildren. And if any of my Godchildren are out trick-or-treating tonight, I hope they will have fun and be kept safe from the wiles of the Evil One!

1 thought on “>Halloween or Hawaweeny?”