>When she was my age, my mother was taking care of her mother, “Mamaw,” at Lakeland Nursing Home in Jackson, Mississippi. This picture was taken on Mamaw’s 87th birthday, July 16, 1986. Mom was 58, just a year old than I am now. Mamaw died a couple of months later. 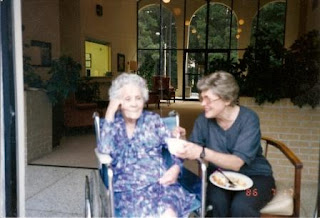 I’m not sure how many years she was in a nursing home. There weren’t special facilities for people with Alzheimer’s then, or at least not in Jackson. She never fell and broke her hip like Mom did… the Alzheimer’s just gradually shut down her body functions.

In 1986 Mom was just recovering from treatments for cancer… that’s a wig she’s wearing. We’ve really shared (and survived) a lot of common life experiences.

I remember being angry with her when she first put Mamaw in a nursing home, in the early 1980s. I wanted her to let Mamaw live with her and Dad, not in an institution. How could she do that to her mother?

Those thoughts still haunt me today, as I consider my own mother’s future. When I moved her 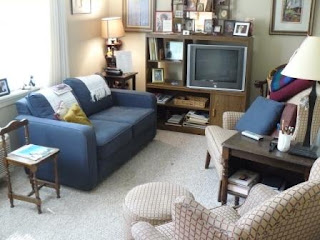 out of her own house and took away her car two and a half years ago, I offered for her to live with us in Memphis. We even bought a house with a downstairs guest suite just for her. But she refused, and begged me to let her stay in Jackson, where she had lived for almost sixty years. That’s when I found Ridgeland Pointe Assisting Living and she became a resident in February of 2006. This is her apartment… the living room. (I just cleaned it out, in case you’re wondering where the clutter is:-) 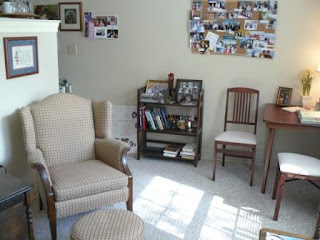 The other end of the living room. 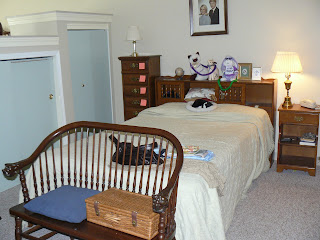 Her bedroom.
And the wall her bed faces, with so much great memorablia, especially pictures of my father. 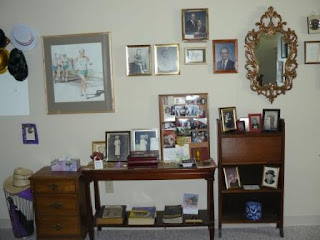 It’s a great apartment, and I hope she’ll be able to live there again.
When she was ready to leave the hospital after surgery for her broken hip a couple of weeks ago, I was asked which Nursing/Rehab facility I wanted her taken to. Lakeland (where Mamaw had lived) was my first choice, but had no female Medicare beds available at the time, so she ended up at Manhattan, which seems to be an excellent facility. But it’s not home. And every time I’m there trying to help Mom deal with her confusion and pain, I look at the faces of so many elderly people in the halls in their wheelchairs and I feel pangs of guilt all over again. Couldn’t I take care of her at home, with help from sitters? Isn’t that the right thing to do?

But it only takes a few hours with her to remind me of my inadequacies… I’m just not able to endure her pain, emotionally, on an on-going basis. The sitters have emotional distance (and a great sense of humor) which enables them to possibly be kinder and more helpful.

Friday afternoon I went upstairs to visit with Mom. A huge banner had been hung on the wall that said Get Well Soon!! We Miss You! It was signed by dozens of her friends at Ridgeland Pointe. The director of nursing and the marketing director from Ridgeland Pointe had come to see Mom the day before and brought the banner to her. The sitter had told me that she had no idea who they were when she saw them. And these are two people she saw almost every day for the past two and a half years.

“Oh, Mom! Look at that wonderful banner from your friends at Ridgeland Pointe!” 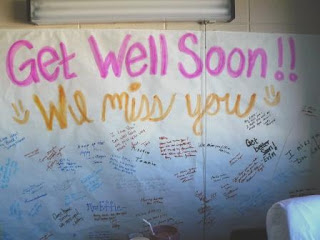 “It’s the assisted living home, where your apartment is… where you’ve been living for the past couple of years.”

No lights go on. Her expression remains blank, so I continue.

“Remember your best friend, Elizabeth, lives there? That’s her, with you in that picture.” I point to the picture of the two of them, which I brought from her apartment last week. She and Elizabeth have been inseparable for the past year or two.

“Is she still living?”

“Yes, Mom. She lives right across the hall from you at Ridgeland Pointe. She has cats, remember? And you eat at the same table in the dining room three times a day.”

Mom points at the door of her nursing home room and says, “Across the hall, here?”

“No, Mom, at Ridgeland Pointe, where you live.”

“No, this is just a rehab center where you’re doing physical therapy to get your hip well so you can go back home to Ridgeland Pointe.”

“What’s wrong with my hip?”

This conversation, like many others, was repeated several times during the afternoon. When my patience began to wear thin, and Mom’s irritability level rose, I distracted her by asking if she’d like a glass of wine. That seemed to erase the afternoon’s arguments, and I unzipped her suitcase in the corner of the room and pulled out one of the small, screw-top bottles of Chardonnay I had stashed there. I poured it over ice (that’s how she likes it, unless it’s really really cold already) and handed it to her and sat down beside her. As she sipped, she noticed again, the “things” on her roommate’s bureau which she thinks belong to her.

“Those are my things over there. She stole them from me.”

“No, Mom, those are Priscilla’s things. You have your own ice pitcher and flowers and stuff—just look at all these things you have!”

I poured a small cup of wine for myself and tried to draw the curtain to obscure her view of Priscilla’s bureau, and the infamous “parrot picture” that she still claims is also hers.

“Why can’t they put up a partition so I can’t see that side of the wall if those aren’t my things?”

“Because the nurses and CNAs need a clear path through the room, Mom.”

“What nurses? What are CNAs?”

“You’re in a nursing home for physical therapy, and the nurses and assistants are helping take care of you while your hip heals.”

“Well, I just don’t like it here. If fact, I hate it. I hate seeing those things (she waves her hand at her roommate’s bureau) and having that woman (her roommate) over there.”

“Well, Mom, at least Priscilla is up and out of the room most of the time during the day… I see her out in the hall in her wheelchair every time I’m here. You’ve really got the room to yourself most of the time. Besides, why don’t you get out more? You know they have entertainment downstairs in the lobby… I think it’s ‘Old Tunes” today… maybe music from the 40s that you used to dance to. Wanna’ go downstairs?”

The next day, the sitter calls me to say that she got Mom downstairs to listen to some people singing Gospel music and that Mom was singing along and clapping her hands. She said that afterwards Mom was “mingling” with everyone, smiling and talking like she’d know them forever. And just a few days earlier she had created a scene in the dining room, saying she didn’t know anyone and hated the food.

The sitter said Mom ate a little more on Saturday, and seems to be in better spirits. I told her where the wine was stashed and asked if she would pour Mom a cup later in the afternoon, and she just laughed and said she’s be happy to. (It’s not the same sitter who was reading the Bible to Mom a few days earlier. I have to pick and choose which ones to call on for various tasks.)
Before leaving town I met with Mom’s “team” at Manhattan: the Director of Social Services, nurse supervisor, physical therapist, occupational therapist, and speech therapist. The physical therapist thinks Mom needs to stay there 6-8 weeks, rather than the 3-4 weeks I was initially told. And I found out from the nurse that Mom wasn’t on any pain meds… so they expect an 80-year-old with Alzheimer’s to do painful physical therapy a week after surgery for a broken hip? I don’t think so. The nurse agreed to ask the doctor for something she could take in a small dose to help her do the therapy…. The goal, of course, is to have her walking, even with a walker, and able to get in and out of bed unassisted, so she can return to Ridgeland Pointe. My fear is that she won’t improve enough and will be in a nursing home the rest of her life. I know that day might be coming, but I just hope it’s not soon.

We had dinner tonight with a group of friends, most of whom have (or have had) parents or relatives in nursing homes. And while the humorous stories that people shared diminished my anxiety over Mother’s situation a little bit, it’s a delicate peace. The trick is not to picture her in her bed in the nursing home when I crawl into my own bed tonight. That image has haunted my sleep for many nights these past few weeks…. But maybe embracing her suffering is part of what it means to be my mother’s keeper. I wonder how she handled my grandmother’s suffering. I wish I had asked her back in 1986.