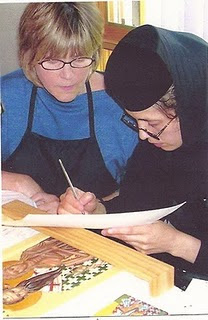 Back in March I did a post to explain why I was retiring from iconography. Since then I’ve received a few inquiries about future workshops, including someone in Memphis who contacted me on Facebook today.

I recommended a few other workshops to the inquirer, and she shared information with me about one, so I decided to share a little bit about them here. If you’ve never taken an icon workshop, these are some that I’m aware of for 2012:

March 5-9, 2012 in Nashville is only $495, including materials. It’s acrylics rather than egg tempera, but the instructor studied under Ksenia Pokrovsky, an excellent egg tempera instructor. The workshop is at an Episcopal Cathedral.

Ksenia Pokrovsky is teaching several workshops in 2012. She’s known as one of the best instructors in the U.S. It’s egg tempera.

Irene Perez-Omer is leading a workshop in Dallas in March and also in San Antonio in March, and in Houston in April and May. (and also one in Italy in October!) A former student of mine has taken several of her workshops, and really likes her. Her style is similar to the Prosopon School.

Holy Dormition Monastery in Rives Junction, Michigan offers an acrylic class every year taught by Mother Olympia (in photo with me). I’ve never taken acrylics, but if I was going to take another class it would be hers, simply for the joy of being with her and the nuns at the monastery. The monastery may also still host an egg tempera class each year, but I’m not sure. They haven’t announced their dates for 2012 yet. 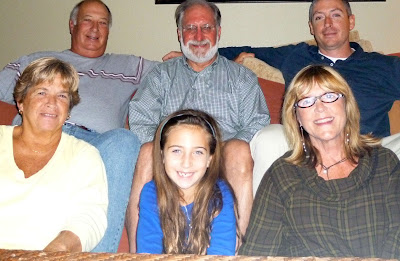 I hope everyone had a wonderful Thanksgiving. Some of my family came down here to the beach to spend the weekend with me, which is why I didn’t do a blog post last Friday. In the picture, back row: Tod, Bill and Jon Cushman (brother-in-law, husband, son); bottom row: Brenda, Sierra and Susan Cushman (sister-in-law, great niece and me). 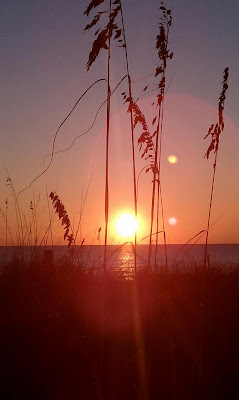 Today is the last day of my month-long writing retreat at Seagrove Beach, and I’m sad to be leaving tomorrow. I didn’t quite finish my novel, but the end is in sight and I hope to finish it by Christmas.

Meanwhile, the sun is shining on the beach as I pack to drive through Mississippi tomorrow, where SNOW is expected! I will miss so many things about my time here, but most of all, the sunsets.