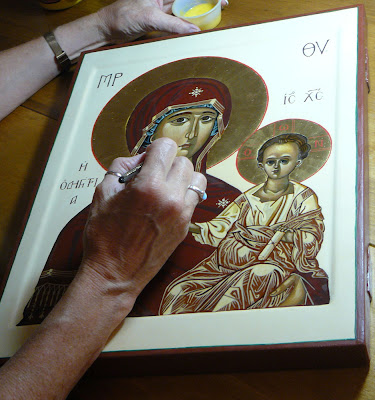 As we approach the celebration of our Lord’s Incarnation—His becoming Man in the flesh—my mind immediately thinks of icons. Why icons? Because icons are incarnational art. Yes.

Two years ago this month my essay, “Icons Will Save the World,” was published by First Things: The Journal of Religion, Culture and Public Life.

You can read the entire essay here.

For those who don’t have the time (or the inclination) to read the entire essay, I’ll re-print one section here, “Incarnational Art”:

In the “First Apology of Saint John of Damascus Against Those Who Attack the Divine Images,” Saint John talked about Old Testament images like the ark of the covenant (an image of the Holy Virgin and Theotokos) and the rod of Aaron and the jar of manna. These are all visible things that aid understanding of intangible things. We read in Exodus 25–26 how God instructed Moses to use images in the tabernacle—including angels woven on the veil of the holy of holies. It’s true that later on God forbade the making of images because of idolatry—because of man’s misuse of something God intended for good. But that was before the Incarnation, as St. John explained:

It is obvious that when you contemplate God becoming man, then you may depict Him clothed in human form. When the invisible One becomes visible to flesh, you may then draw His likeness. When He who is bodiless and without form, immeasurable in the boundlessness of His own nature, existing in the form of God, empties Himself and takes the form of a servant in substance and in stature and is found in a body of flesh, then you may draw His image and show it to anyone willing to gaze upon it.

God’s Incarnation not only made it possible for us to draw and venerate his image, but also the images of men and women who have been transfigured by him—the saints and martyrs. The Seventh Ecumenical Council (787), which upheld the doctrine of the veneration of images as an inevitable result of the Incarnation, said this about icons of saints:

These holy men of all times who pleased God, whose biographies have remained in writing for our benefit and for the purpose of our salvation, have also left to the catholic Church their deeds explained in paintings, so that our mind may remember them, and so that we may be lifted up to the level of their conduct.

The icons are visions of what we can become if we allow God to penetrate every aspect of our lives. Those who attain this God-likeness to the fullest extent recognized by the Church are saints. Their lives, their stories, lift us up to be all that we can be—as we are transformed by God’s grace and love.