>I met some hot mamas Monday afternoon at Off Square Books in Oxford, Mississippi. Well, I 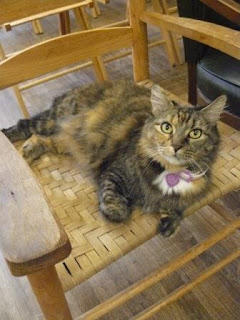 already knew Mamacita, whose name means “hot mama.” And yesterday when my friend Sue and I arrived early to get a good seat for Haven Kimmel’s reading, there she was, sitting on the front row with her usual cattitude. So we sat on the second row. Actually, the third. 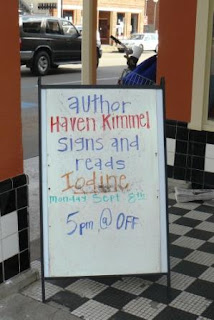 First of all, if you didn’t read my post about Haven Kimmel on Friday, you should check that out for background on tonight’s post. I had already read her latest novel, Iodine, before we got to Square Books, but I bought another copy for a friend… and did a little more shopping (more on that later) …

before heading down to Off Square Books for the reading. If you’ve never been to Oxford and this sounds confusing, it’s really not. See, the main bookstore doesn’t 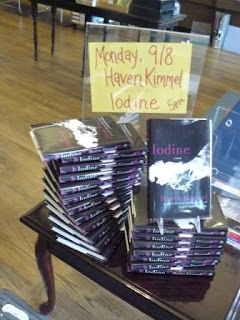 have enough space for readings, so the readings are just down the black at their “annex”… which also carries lots of titles, magazines and other cool stuff. 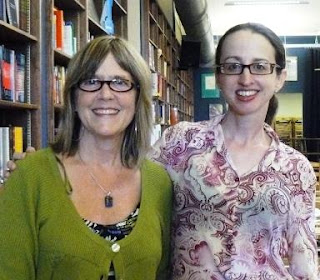 Haven welcomed me like a long-lost friend, although we’d only met online, when she did the interview for my blog. She also recommended a couple of literary agents for me to query. I’m always blown away by the generosity and support so many successful authors pour out to us fledlings. Thanks, Haven!

Her reading from Iodine was wonderful. When it came time for questions from the audience, I 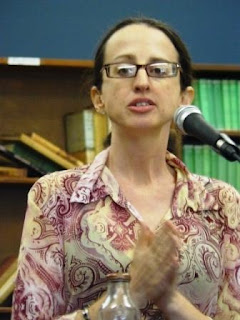 was careful not to repeat questions from my blog interview. My first question was about the title. Although there’s a place in the book where she briefly talks about iodone, it didn’t seem significant enough to me for it to be the title of the book. But when she said it came from Leonard Cohen’s song, “Iodine,” it began to make sense. She warned us not to listen to the music—too bizarre—but to read the lyrics, which are here. The line she quotes is this:

Okay, maybe you have to read the book to get this. 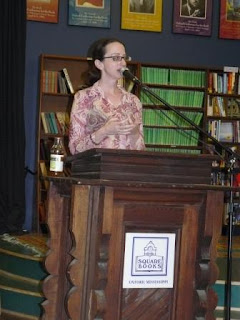 Someone asked her about how much research she did for the book, which has lots of great details about Jung, Freud, archetypal psychology and literature, alien abductions, and other mythical and mystical stuff. Her answer was humbling. She read everything she could about everyday life in the year 1987. And about 3000 pages of source materials on Freud, Jung, Hillman, and others on dreams, the underworld, all that stuff. She was already familiar with lots of this, but feels it’s really important to get the details right. Once she read everything she could find by Kierkegaard just to be sure she wasn’t using the one quote by him out of context for her book, The Used World.

I was impressed with her humility when she said, “Imagine how difficult it is to write a genius when you’re not one!” I personally think Haven is brilliant, but the point is, she does her homework.

“You can never be wrong,” she explained. “Your readers trust you.”

Which reminded me of something Scott Morris encouraged me to do during the writing workshop in Oxford this past June. Since I’m using clothing as my controlling thematic device for my memoir, he said I should read everything I can get my hands on about clothing, fashion, fads, trends, styles, etc. from the 50s through the present. Right. Guys don’t generally have a clue how much is out there about clothes. But still, I made a small stab at it after Haven’s talk, with two purchases at Off Square Books:

First, From Manhattan to Mississippi by Daisy Karam-Read. A very short (110 pages) bu 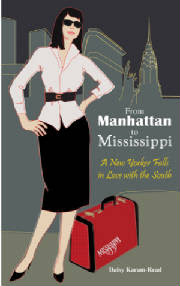 t delightful read by a woman who was an actress in New York and LA and married a Mississippi man and moved to the Gulf Coast. Her take on Southern women is on point. From her chapter, “Pretty Women”:

Jerry and I were leaving a theatre where we had just watched Gone With the Wind.

“Do you regret that the feminine way women dressed in those times has vanished?” I asked.

He chucked quietly and said, “No, because southern women still look that way.”

…as I looked around at the other moviegoers in the parking lot, I saw what he saw: The women were dressed in silk chiffon and gauzy cotton dresses, some of them strapless, a couple with full skirts; all looked soft…. Southern women are expected to be pretty and tasteful; they always have been. They still love beautiful fragrances and cosmetics. They still get dressed up for church on Sundays, even as church dress has become more casual elsewhere.

Karam-Read’s book is delightful… and a whole lot easier research than Kierkegaard! 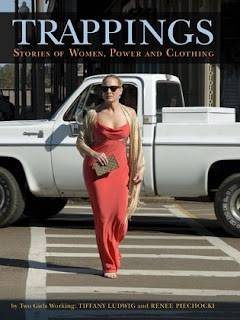 The second book I found before leaving Off Square Books was Trappings: Stories of Women, Power and Clothing by Two Girls Working: Tiffany Ludwig and Renee Piechocki. That’s Oxford, Mississippi’s own Clara Lee Arnold on the cover. 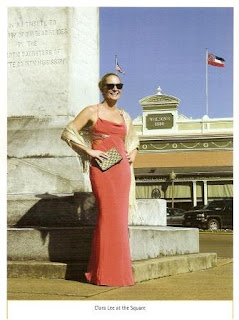 Square. When I was a student at Ole Miss in the late 60s, I couldn’t afford to buy clothes at Neilson’s. Years later, on one of my first return trips to Oxford, I made a bee-line for their shoe department. But that’s for another chapter.

Now this is a great find, because these gals have already done the research. Over a period of six years, artists Tiffany Ludwig and Renee Piechocki interviewed over 500 women from across the United States asking them to respond to the question: what do you wear that makes you feel powerful? You can read about the project here.

Of course I haven’t had time to read many of the profiles yet, but I started with the “cover girl,” Clara Lee Arnold. Fascinating woman. She’s in training to be a professional boxer (trains in Memphis, actually) but she’s gorgeous in an evening gown, as you can see from the cover. But listen to her take on the culture she grew up in (Oxford, Mississippi) and you get a taste of what’s coming in my book:

I was dating a man in Columbia, Missouri, for a while, and I would go up there and I was like, Oh man, I look good. There is just an attitude in Oxford to be looking great all the time. I’d go to the grocery store in Missouri and I’d have on makeup. And people would be looking like, Why are you so dressed up for the grocery store?

That’s what I grew up with in Jackson, Mississippi. And that’s what Daisy Karam-Read found out about Gulfport, Mississippi when she moved there from New York City. And of course it’s not that New York City isn’t stylish. Remember her husband’s comment when they came out of the movie theater? About how beautiful all the southern women looked? Her response?

In my omnipresent black top, classic black trousers, black ballet flats, and red lipstick, I was chic, of course, but I didn’t look southern.

Some things can’t be taught. And other things are hard to unlearn.

So I’m back home now, looking at comments from my critique buddies on Chapter 6 of my memoir and remembering that my readers will be trusting me to know a whole lot more about my subject than I tell them. And yes, Scott and Haven, research helps. But nothing is more valuable to the authenticity of this book than the decades I spent in Mississippi (and even in Memphis) … trying to be that Pretty Woman… and dressing the part for love.