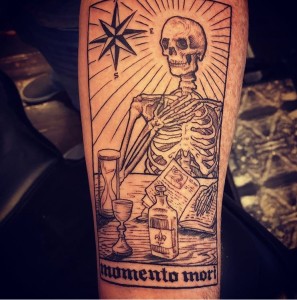 I had never heard the Latin phrase, “memento mori,”until a couple of weeks ago when we were in New Orleans, having dinner with our son Jonathan one night. He showed us his new tattoo (see photo at right), which has the phrase at the bottom of the picture. I asked him what it meant, and he said it was an Army thing…. Something from Caesar that meant “remember you will die,” or something similar. Jon spent twelve years in the army, flying helicopters for two of his three tours in the middle east, often facing death up close and personal. 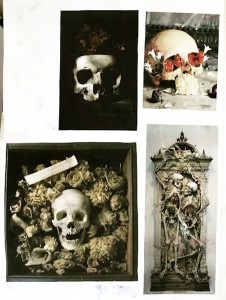 I Googled the phrase later and the closest translation I found was similar—“Remember that you have to die.” I read more about its military origins, especially as it related to “Roman triumphs.”

A couple of days later, I discovered some art work Melissa Conroy (Pat Conroy’s daughter) posted on Instagram (see left) and couldn’t believe that it was also about memento mori. So, having never heard the phrase, now I was seeing it twice within a week or so. Was there a message there for me? Oh, but wait…. 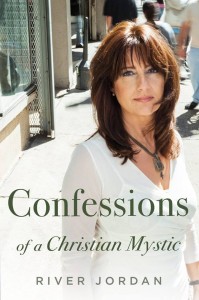 The next day I started reading (an advance readers copy of) River Jordan’s upcoming book, Confessions of a Christian Mystic, (which is awesome and will be out in 2019) and, if you can believe this, the title of chapter 6 of her book is “Memento Mori”! How synchronistic—or maybe, how mystical!

When Jon first told me about the phrase, I thought about how the Church fathers often referred to something similar, encouraging Christians to keep their death before them at all times, so that they would live more godly lives. I found St. Ignatius Brianchaninov’s “On the Remembrance of Death,” and read part of it again. Written primarily for monks, it’s a bit more intense than I can embrace in my current lifestyle, but the concept of living as though one might die soon isn’t a bad thing. 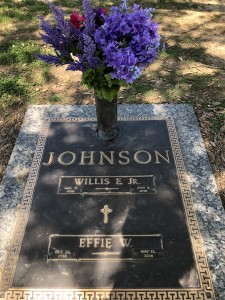 I had the opportunity to have my own death brought closer in my mind this past week, when I visited the graves of my mother, father, brother, and Goddaughter—all within a few feet of each other—at Natchez Trace Memorial Park in Madison, Mississippi. My mother Effie Johnson died two years ago May 22. My brother Mike Johnson died eleven years ago this past January. And this year I will commemorate the twenty-year anniversary of the deaths of my father Bill Johnson (July 9) and my Goddaughter, Mary Allison Callaway (September 18). 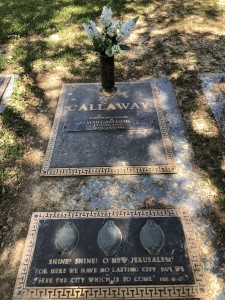 As I brushed the dirt off the grave markers and placed fresh flowers in the vases, I sang “The Angel Cried,” and shouted, “Christ is Risen! Indeed, He is Risen,” and then spent some time sitting on a bench under a beautiful tree near the graves. I talked to each of these four people I loved so much. And I also thought about my own death. I thanked God that He has allowed me to live my 67 years so far, and hasn’t taken me during times (days, weeks, months, or years) when I was angry, or when I was withholding forgiveness from others. With much joy I realized that I am more at peace now than I’ve ever been in my life, and for that I am so grateful. Maybe I’m beginning to learn to live like I am dying. 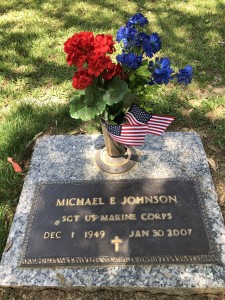 Meanwhile, a few more reflections on tattoos. My husband doesn’t like them. Lots of folks don’t. I didn’t always, as my kids remember. But I do now. Maybe for the same reason that I like graffiti, when it’s done as art and not as a gang message. I can see how folks would like to use their skin as a canvas to share a message. About nine years ago a group of women got together for a 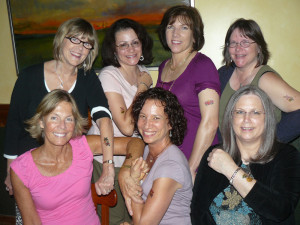 going-away-party for my Goddaughter Julie Stanek (now Julie Stell) who was moving to Pennsylvania. Part of the fun included temporary tattoos—several of us, including Julie, were artists and it seemed a fitting way to remember the day. I did a couple of posts back when some of us were gathering at Julie’s to do art together. We called ourselves the “Mixed Bag Ladies.” Here’s another post about the group. 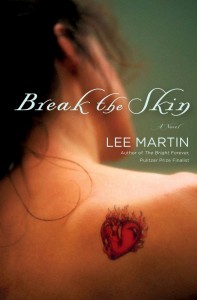 As I was reading another advance readers copy this week—this time it’s Lee Martin’s upcoming short story collection, The Mutual UFO Network,—I remembered one of his earlier books, titled Break the Skin. I Googled the cover because I remembered that it had this haunting image of a woman with a beautiful tattoo. Its design reminds me of some of Mare’s graffiti in my novel Cherry Bomb. Lee is an amazing writer who was a Pulitzer Prize finalist for his novel, The Bright Forever. More synchronicity…. 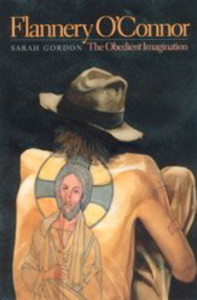 And finally, having just finished “launch week” for my new anthology, SOUTHERN WRITERS ON WRITING, I realized that at each of the three events—at Square Books in Oxford, Mississippi, Lemuria Books in Jackson, Mississippi, and Novel Books in Memphis—at least one panelist mentioned Flannery O’Connor. An inspiration to many southern writers and readers, her short story “Parker’s Back” involves a tattoo of a Byzantine icon of Christ on the back of one of the characters. The first time I read the story I loved how O’Connor tied her gritty southern character to Byzantine iconography, and I hoped to emulate her as characters in my novel and also in a short story I recently drafted are changed by icons. I’ll close with an interesting article I found today by an Orthodox priest Father James Coles, “Man is an Icon of God,” in which he talks about “Parker’s Back.” Thanks, always, for reading.