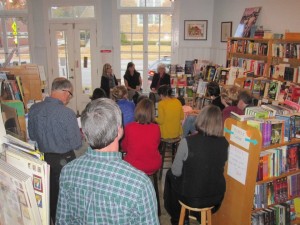 I’m home for one day between trips (one 2012 final event for Circling Faith, this past Saturday at Avid Bookshop in Athens, Georgia (see picture at right) and tomorrow I’m off to Denver to visit kids and grands) with little time for blogging, so this will be short. I wanted to share my recent adventures in air travel, since many folks will be doing this during the holidays. (And I’ve got another trip in December after this one.)

But first, at midnight last Thursday night—the night before I would be flying to Atlanta—I got a phone call from Lakeland Nursing Home in Jackson (Mississippi) where my mother is a resident. My heart always skips a beat when I see their name on my caller ID, and especially at midnight. Mom had gotten out of bed unassisted and fallen on the floor in her room. She didn’t seem to be in pain, but they still had to call the ambulance to take her to the emergency room at St. Dominics Hospital. For the next few hours, I slept restlessly, waiting for them to call me back. My mind was spinning—would I have to cancel my flight to Atlanta and my plans to join Wendy Reed and Barbara Brown Taylor for our reading in Athens? Would I need to drive to Jackson? Finally around 5:30 a.m. they called back to say Mom was back at Lakeland. X-rays showed nothing was broken. She didn’t even have any bruises or bumps. And of course, she had already forgotten what happened.

Sleep-deprived, I got up, finished packing and headed to the airport. The plane was full to overflowing. (I’m thinking lots of folks were headed to Atlanta for the Alabama-Georgia SEC final game.) So, the airport personnel at the gate asked us over and over to please check our carry-on bags, that there would NOT be room for all of them on the plane, and it would delay the flight if we don’t. Of course I was first in line to check mine, and I noticed a few others checking theirs. But once we boarded, the fun began. One woman in particular, caused most of our delay. She had two carry-ons. One was obviously too large, and yet she insisted on carrying it down the aisle of the plane, where she discovered it wouldn’t fit in the overhead bins. There were dozens of people standing behind her, trying to get to their seats. So, she had to stand in the back of the plane until everyone boarded, then take her bag to the front to check it. She continued to argue that she didn’t want to check it, although there was no place it would fit. A baby was crying. A cat (yes) was meowing loudly. The air vent above my seat was broken and it was hot on the crowded plane. But finally we were off.

(BTW… I had a wonderful weekend with my sister-in-law, Cathy, and her family in Atlanta. She drove me to Athens on Saturday for my reading at Avid Bookshop. We enjoyed touring the University of Georgia campus (where all three of her kids went to school) and downtown Athens. Brunch at NONA (New Orleans style) and dinner at The Last Resort, after our event at Avid Bookshops. Terrific weekend! I’ll post lots of pictures on Facebook later today.)

So… on the return trip on Sunday, I go to the Sky Club to relax and have a drink before the flight. I’m happy to discover that I’ve been upgraded to First Class, which will make my flight more pleasant. But the attendant in the Sky Club fails to tell me, when I show her my boarding pass, that the gate has been changed. So, I walk out of the Sky Club, which is near Gate 16, and walk 14 gates away to Gate 30, only to find out the flight has been moved to

Gate 4. Hurrying 26 gates back through the crowds in the other direction, I make it in time and get seated. No luggage drama this time. But after the flight attendant gives their demonstration, the captain comes on and says there’s a small mechanical difficulty. Twenty minutes later he says we can’t fly this plane, to please de-board the plane and they would tell us which gate to go to for another flight. Dozens of weary travelers crowd around the gate waiting for instructions. Finally they tell us which gate to go to, and we go rushing en mass to our new destination. But another group of travelers pass us by, singing Christmas carols! It wasn’t a professional flash mob group, (like this one in Denver last year) but their joyful spirits sure did lift mine, and I found myself singing along with them, “jingle all the way!”

Waiting in line at my new gate, I looked around at my fellow passengers, and wondered if they were traveling for business or pleasure here at the beginning of the holiday season. I’m sure it was a mix.

We boarded the plane, taking the exact same seats we had on the previous plane. I sat down beside my previous seat partner, and we exchanged a greeting, and watched the familiar faces going down the aisle beside us. One man smiled at us and said, “Déjà vu, right?”

And we all laughed.

The flight was only an hour late getting into Memphis. I missed the Harbor Town Christmas Parade, but got to see our neighbors mingling around the big lighted tree at Christmas Tree Park, just around the corner from our house, where their children posed with Santa for pictures and their parents enjoyed food and drinks. Bill and I decided to eat at our neighborhood bar & grill, Tug’s. I had had enough excitement for the day.

Enjoy your travels during the holidays. Take time to sing. And to laugh.