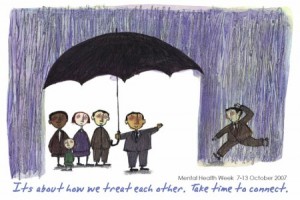 I’ve been thinking for a while about organizing my blog posts by subject. Mondays would be my day for posting about mental health. (I know, I know, today is Tuesday, but I’ve been in Denver with kids and grand kids for a week, so I haven’t had much time for blogging.) The drawback to this sort of organization is that I don’t want to paint myself into a corner. What if I don’t’ have a mental health post in mind every Monday? (Or a post about writing on Wednesday and a post on spirituality or personal stuff on Fridays)…. So, don’t hold me to it, but for now, I’ll share a mental health treasure I recently discovered.

Barbara Gordon was an Emmy-award-winning documentary producer in New York City when her life began to unravel. Married to a sick, abusive man, pushed beyond her limits by a stress-filled career and personal life, her downward spin began with Valium and continued until she landed in a mental institution. She tells us her story in I’m Dancing As Fast As I Can (1982) now out in paperback. (I read it on my Kindle.)

I’m a bit of a mental health junkie, always hunting for treasures between the covers of books on psychology, psychiatry, spirituality, abuse, addiction, etc. And now I can’t remember how I even heard about Gordon’s book, but I’m so glad I did. Of course there are the common themes that one finds in many such books—friendships formed in residential treatment centers, relationships between patients and therapists, each person’s struggle against her past, abuse, neglect, addictions, and ultimately her self. But there were a few elements of Gordon’s story that caught my attention. And of course I identified with many parts of her story, beginning with the denial she held onto in the beginning:

“Someday I’ll learn what’s behind all this shit, I promised myself. But right now I’ll get more Valium. I’ll work on the film. Everything is all right when I work.”

When she first tried to free herself from the things in her life that were causing her craziness, she was overcome with a new struggle:

“So lonely. A friend once described lonely by saying that if it were a color it would be white. At first I was too busy being sick to be lonely; too wretched to miss anyone; too busy warding off the intrusive thoughts, fighting the feeling of numbness to be lonely. I didn’t know that acute symptoms are the psyche’s way of saying you are frightened, lonely, loveless, depressed. That’s why you feel all this insanity, all this psychotic pain. You would rather make a hurricane in your head than experience on legitimate emotion—loss, fear, anger, sadness, anything.” 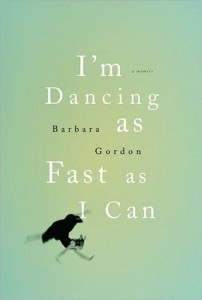 One of the first lessons Gordon learned in the five months she spent in an institution was something I’ve probably heard or read before, but it never resonated with me the way it did when I read her words:

“… mental illness is an exaggeration of the human condition…. We all experience the same conflicts. It’s only that in mental illness everything is blown completely out of proportion.”

This reminded me of some of Kathleen Norris’ writing about depression—specifically the difference in the garden variety we all face and the more insidious version that can become a true mental illness requiring medication or therapy.

The main “take-away” for me from Barbara Gordon’s experience was what “Julie” (Gordon’s therapist) helped her discover about living with ambiguity:

“The world is what it is, imperfect, a world of people—no heroes, no villains, just people. And you’ve got to learn to accept that, in yourself and in the people you love….You must learn to live with ambiguity, Barbara. Yours and everyone else’s. Life is not a film with good guys and bad guys. I would be easier that way, I know, but it isn’t like that.”

We all have people in our lives that we might tag “good guys” or “bad guys.” And it’s so easy to blame the bad guys for our problems and become overly dependent on the good guys to save us from ourselves. I find myself identifying strongly with Gordon’s struggle:

“Could I … learn to live with ambiguity, accepting my own flaws and conflicting emotions about people I loved? Could I ever learn to become a whole person again?”

These words may or may not resonate with you, but if they do, I’d love to hear your thoughts. Please leave a comment here or on my Facebook post. I’m headed back to Memphis today. Leaving my precious grandchildren and children I’ve just spent a joyous week in Denver with, and returning to my every day life at home with my husband, my writing, my church, my community. It won’t be perfect. But maybe Gordon’s book will help me learn to live with the ambiguity.