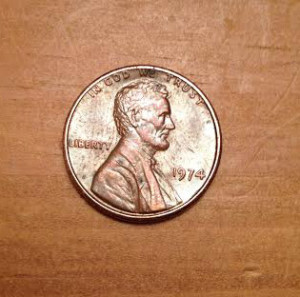 When I woke up this morning I found this penny in my bed. It was just lying there, face up. (I photographed it on my bedside table, which is why you don’t see wrinkled sheets under it.) With my morning coffee I began to wonder about the meaning of finding a “lucky penny.” The old saying from childhood came back to me:

Find a penny, pick it up, all day long you’ll have good luck.

Honestly, if I see a penny on the sidewalk or in a parking lot or other public place, I don’t usually pick it up. Usually my arms are full of packages. And it hurts my back and neck and hip to bend over and pick something up off the ground. And then there’s the whole dirt/germs thing. I might do it for a quarter, but nothing less.

But I really had no choice but to pick up this penny from my bed this morning, and now I’m pondering how it might affect my day.

A lucky penny (a penny found lying on the ground face up) has a luck half-life of approximately one day (23 hours, 56 minutes, 12.87 seconds). Most luck should follow immediately following picking up of the penny.

It’s been an hour and a half since I found the penny, and I haven’t received any phone calls about winning the lottery or anything. But I will say that my pain level in my hip, neck, back and knees (which was through the roof during our three-day move this past Thursday-Saturday) is way down. That could be because I actually rested for a few hours yesterday afternoon and evening, for the first time in a couple of weeks. But I’m going to pay attention for the next 22 hours or so. Surely an optimistic attitude attracts good luck.

Maybe later when I get out on errands I’ll pass my lucky penny along to someone else. wiseGEEK says that the good luck will only happen if you pass the penny on to a friend or stranger on the same day it is found. Or I might save it until May 23, which is National Lucky Penny Day. Maybe I’ll find inspiration for a better way to use it then.

I’d love to hear any “lucky penny” stories from my readers. If you’ve got one to share, please leave a comment here or in a Facebook thread. I wish you all a happy Monday!