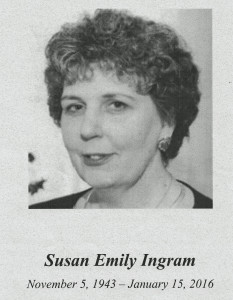 This is a week for grieving. A dear woman in our church passed away last week, after a seven-year battle with cancer. The funeral was this morning at St. John Orthodox Church here in Memphis. Many wonderful words were spoken about Sue, both at the visitation and Trisagion Prayers service last night, and again at the funeral service this morning. She touched many lives with her love, strength, and humility. And now her husband and daughters—who cared for her during her decline at home for the past couple of years—are grieving. As they should be.

One of our dear friends (who is also our Godson) lost his brother this past weekend. Thomas was only 64—my age. He struggled with an illness that landed him in the hospital just before Christmas, followed by a brief stay in a rehab facility, and then another hospitalization. His illness and death came suddenly, and so his brother and their family are also grieving. My husband will be officiating at his funeral, which will be this Saturday afternoon.

I just read an article in the Huffington Post by Margaret Howard called “11 Healthy Ways to Grieve.” Some of her insights:

Death makes people uncomfortable. Mourning reminds us of death. So no one wants to see grief and mourning….This comes partly from our Puritan roots, which value stoicism, and that we adhere to unconsciously. The cultural message is: It’s weird to mourn. That cultural message is unhealthy and unnatural.

I remember when my father died back in 1998. Over 500 people attended his funeral service. Some of the people at his church kept telling me, “This will be a celebration of his life! Let’s keep it upbeat and happy!” But when it came my time to speak (yes, I asked to speak at my father’s funeral) I talked about how my father’s early death at 68 was an affront to life.  I spoke of the trauma my mother and I suffered as Dad became an invalid for fourteen months and eventually died at home with Hospice care, and Mom and I by his side. I wept as I spoke. Later during the reception in the fellowship hall, more than one person said to me, “Thank you for giving us permission to grieve.”

We think of grief that lasts beyond a very short window (funeral, visitation, a short leave from work if we’re lucky, or maybe six months of “reasonable” sadness if we adhere to some guidelines) as a weakness; a spiritual failing; a mental illness…. 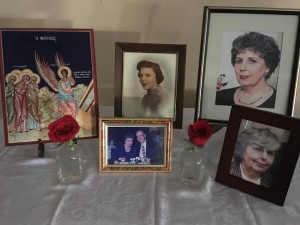 It’s often hard to know what to say to someone who has lost a loved one. Especially if they have been involved in intensive caregiving, as Sue’s family has. It might be tempting to say (or think): “I know you must be relieved,” or “I’m glad she is no longer suffering.” And while it’s true that her suffering is over, it’s not always true that the family feels relief. Sue’s family is suffering greatly because, as one of her daughters said to me last night, “I miss her so much!” That’s healthy grieving.

A text from the funeral service in the Orthodox Church is titled, “I Weep and I Wail.” One of our priests chanted that hymn this morning. The music has the elements of a dirge. If this seems counter to the Christian mindset of belief in life after death and celebration of the resurrection, again I think that’s because of how our culture has tried to sanitize death and funerals. It’s okay, actually it’s preferable, to do both: to weep and to wail as we feel the pain of loss, and also to celebrate the resurrection (in the Christian tradition) or the person’s life or whatever works for your personal beliefs.