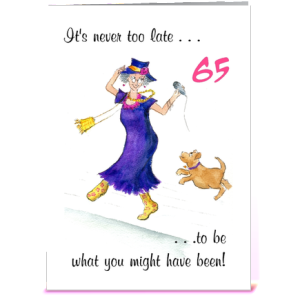 Tomorrow I am turning 65. Sometimes I forget how old I am, but I have a feeling I’ll remember this milestone for a while, especially since dozens of insurance companies won’t let me forget, as they call and call and call to “help me” find my way through the Medicare maze.

Two people are on my heart this week. My aunt, Barbara Jo, who died on March 10, 2005, one week before her 65th birthday. She was one of my favorite people. I remember thinking how young she was then, and I hope I can hold onto her  mindset now that I’m catching up with her.

The other person is Pat Conroy, who died this past Friday at age 70. Pat was my favorite author. Ever. I was blessed to meet him in person in 2010—when he was the age I am now—and to experience the warmth and generosity he shares with readers and emerging authors. I love his wife, Cassandra, who is also a favorite author. My heart hurts for her as she has lost her true soul mate. 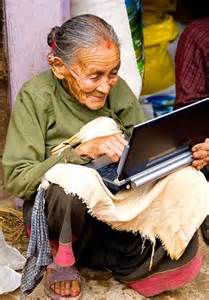 When I was in my fifties, I set some goals I hoped to achieve by age 60. I haven’t quite made it to the completion of those goals, but I feel that I’m on my way, and that goals should be moveable targets. For example, I haven’t published my novel yet, but I do have essays in three anthologies and a book that I edited coming out next March. And two more literary projects underway. And I’ve discovered another passion—I’ve become a salonnière, hosting writers and musicians and artists in our home for readings, discussions, and house concerts every few months for the past two years. And while I never set it as a “goal,” I’ve been my mother’s long-distance caregiver for the past decade as Alzheimer’s knocked her off her feet and eventually into a nursing home.

The February/March issue of AARP Magazine features an article by AARP’s CEO, Jo Ann Jenkins, which was adapted from her book, Disrupt Aging: A Bold New Path to Living your Best Life at Every Age, coming out on April 5. There’s lots of good stuff in the article, but I kept tripping over the oft-repeated phrase, “turning 50.” Fifty seems like a long time ago for someone turning 65. On my 50th birthday I had surgery for cervical cancer. That same year, our youngest child graduated from high school and left us with an empty nest as she went off to college. Our oldest son joined the Army and was deployed to Iraq not too many months after 9/11. It was a banner year, but I wasn’t feeling old. Yet.

At 65 my body definitely feels older. One reason, of course, is the car wreck I had in 2013, leaving me with a broken neck, leg and ankle, requiring several surgeries and months of physical therapy. But I’ve recovered to my “new normal,” and press on with lowered expectations for physical strength and mobility, trying to make the most of what I have, with help from an elliptical machine at home (facing a flat screen TV), a beautiful neighborhood on the Mississippi river for walking, and two neighbors with swimming pools. So I’m blessed with opportunities to keep moving. 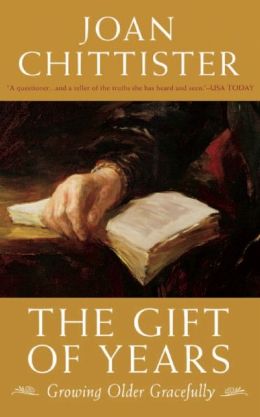 But it’s not just our bodies that need attention as we age. Our emotional and mental health need attention more than ever. About a year ago I discovered a wonderful book, The Gift of Years: Growing Older Gracefully, by Joan Chittister. If you missed my earlier posts about her book, here they are:

Today I’m going to share some reflections on two chapters from Chittister’s book.  The wisdom she shares in “Mystery” might feel counter to what she says later in “Productivity,” but I think they are both important. In “Productivity” she says:

The work we do and the way we do it is what we leave behind for generations to come…. Work is creativity. It is the expression of ourselves that no one else can duplicate…. But in that case, retirement does not free us from the responsibility to go on tending the world…. This may in fact, be the first moment in our lives when we are really free to choose work that brings out the best in us and so brings out the best in the world around us.

I haven’t had a “day job” in many years. I “retired” from my stay-at-home-mom position in 2001. While raising three kids, I also worked at publishing a regional trade magazine for architects and builders, doing technical writing and editing newsletters for several organizations, running an aerobic dance business, and several administrative positions. And since I’ve been an empty-nester I’ve focused on two creative pursuits: writing icons and writing essays and books. So for me, “retirement” is simply a continuation of my focus for the past fifteen years. I have no desire to quit “working” as a writer any time soon!

In Chittister’s chapter, “Mystery,” she says:

So much in life is aimed at either youth or middle age. Almost nothing points us to the days when time alone will be our guide, our companion, our goal. We have few or no promises about the glories of being less busy, less harried, less consumed by everything. The later years of life are given to us to bring in the harvest of all that effort. But to live into the mystery of this stage of life, it is important to allow ourselves to break out of the confines of the old one with all its social rigors and personal needs and public roles and protocols.

I think I’ve already been moving in this direction. I’ve finally learned how to say “no” without guilt, and to back off and slow down from so many activities that don’t promote an environment where this “mystery” can unfold.  As Chittister continues:

Routine can finally give way to mystery, to possibility, to the grazing time of life.

Grazing. So that’s what this is. A bite of live music. A taste of art at a new showing. A feast of words at a literary event. Or even just a quiet afternoon reading a good book. For the first time in my life I’m learning not to be a slave to my calendar (although I’m still pretty organized) and to allow for mystery to intervene on any given day. A final quote from Chittister:

There is something holy-making about simply presuming that what happens to us in any given day is sent to awaken our souls to something new: another smell, a different taste, a moment when we allow ourselves to lock eyes with a stranger, to smile a bit, to nod our head in greeting. Who knows? Maybe one of those things will open us to the refreshing memory of pain, a poignant reminder of glory, a breathless moment of astonishment, a sense of the presence of God in life.