This past weekend was an emotional and physical roller-coaster ride. My husband and I drove down to Baton Rouge on Friday for the Louisiana Book Festival. Although I was so sick (bad cold and racking cough) I would have stayed home under less exciting circumstances, I pressed on and we made the drive safely. The author’s party on Friday night was like a Hollywood opening full of the rock stars of the Southern literary world. But the Shoe Burnin’ Show on Saturday was the crème de la crème of the festival. A brilliant blend of stories and songs woven seamlessly together in a show that epitomizes what Southern storytelling is all about. And finally on Saturday night, nestled in our hotel room in New Orleans, I began to read the other contributors’ stories between the covers of The Shoe Burnin’ anthology.

After reading a few of my fellow shoe burners’ stories, I began to feel unworthy of the company my little essay, “Eat, Drink, Repeat,” was keeping with these literary giants and their strong voices. The negative voices that often accuse me and criticize me started screaming through the pages, “You’re not worthy! What do you think you’re doing in here with these talented people? Who wants to read about your eating disorder?” Especially when I read master storyteller, Suzanne Hudson’s piece, “All the Way to Memphis.” Now that’s a real story.

But then I read Lari White’s essay, “Girl Shoes.” She and Suzanne had read parts of their stories during the Shoe Burnin’ Show on Saturday, taking turns reading the different characters’ lines together. But it wasn’t until I read Lari’s essay from start to finish—three times—in my hotel room over the next two days that its healing magic began to work on my wounded psyche. You see, Lari really is a rock star. She’s been in movies, on television, on Broadway, and has won Grammy awards for her music. She is beautiful and brilliant. And tiny. Everything I’ve always wanted to be. And yet, she writes in “Girl Shoes” about hearing those same negative voices in her head that I hear! How can that be?

Lari described those voices once to her sister, a hospice chaplain and advocate for mental health services, like this:

Mean, hateful monsters spewing endless streams of negativity. They criticized my every move, belittled every creative effort. They harassed me sleepless in the middle of the night, and started every day with their shitty chatter.

Really? How can someone that beautiful and accomplished suffer the same emotional harassment I’ve lived with all my life? Lari’s sister, Natasha, has studied a therapeutic technique called Voice Dialogue Therapy. She began to help Lari identify and interact with the voices:

The Merciless Judge, the Pusher Achiever, the Soul Crushing Pragmatist, the People Pleaser, the Toxic Martyr, and the Critic…. Well, they’re all just a bunch of bullies!

I cried as I read Lari’s essay again this morning and rejoiced with her as she found her Girl Voice and learned to moderate all the other personalities in her head. And I loved the crazy-high platform shoes she brought to the Shoe Burnin’ not only as metaphor but as a weapon with which to beat the crap out of the Critic. You go, girl! 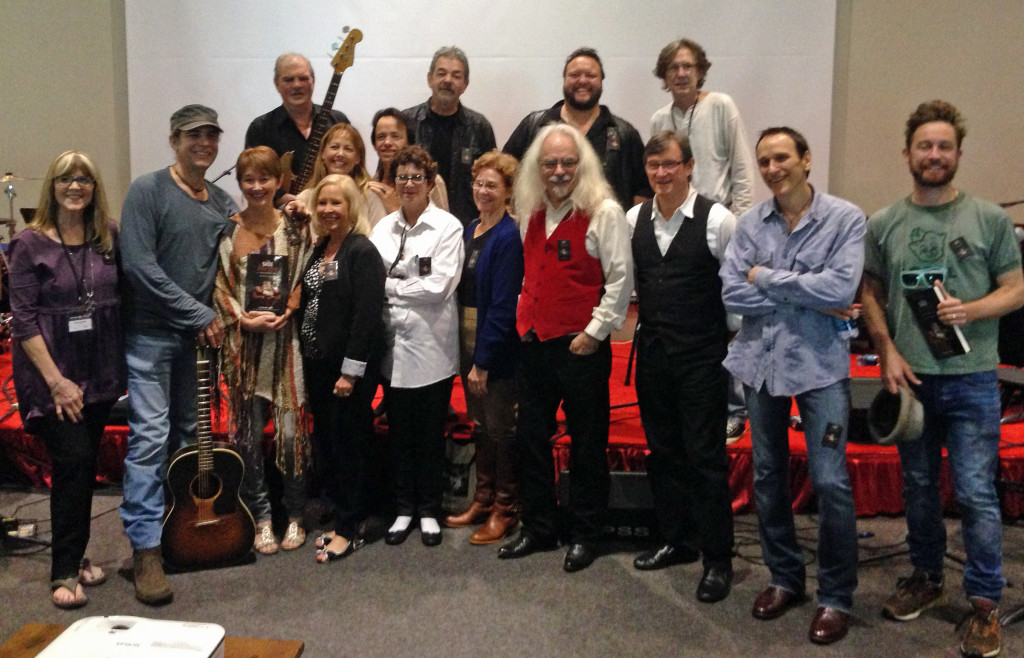 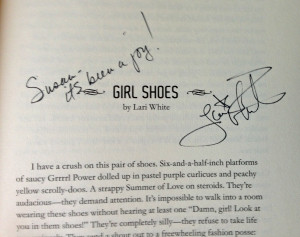 And so as this amazing book makes its way out into the world of waiting readers, I’m holding my head high. Humbled and honored to be included. I hope you buy the book and read all the stories and listen to the CD full of more stories and music to touch your soul.