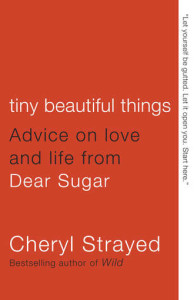 Tiny Beautiful Things by Cheryl Strayed—best-selling author of a memoir, Wild: From Lost to Found on the Pacific Crest Trail, and a novel, Torch—is a collection of the best columns from “Dear Sugar,” where Strayed has served as the anonymous columnist at The Rumpus since 2010. (She revealed her identity in 2012.)

I bought the book because a wonderful woman I met at the 2013 Oxford Creative Nonfiction Conference, Nina Gaby,  told me that Strayed’s experience of sexual abuse was similar to  mine—also with her grandfather when she was a little girl. She shares this experience in response to a letter she received at the beginning of her time as the advice columnist, “Sugar.” The letter said:

WTF, WTF, WTF? I’m asking this question as it applies to everything every day.

Strayed began her reply in an unusual way for an advice columnist—by sharing something very personal from her own life:

My father’s father made me jack him off when I was three and four and five. I wasn’t any good at it. My hands were too small and I couldn’t get the rhythm right and I didn’t understand what I was doing. I only knew I didn’t want to do it. Knew that it made me feel miserable and anxious in a way so sickeningly particular that I can feel that same particular sickness rising this very minute in my throat.

I felt that same particular sickness as I read her words, describing the same act my grandfather required of me when I was four or five. But I also felt a huge sense of solidarity, and I wanted to read more.

I hated having to rub my grandfather’s cock, but there was nothing I could do. I had to do it…. When I learned he died, I wasn’t sad. I wasn’t happy either. He was no one to me and yet he was always there, the force of him and what he’d made me do moving through me like a dark river…. The ghost of that old man’s cock would always be in my hands….

That’s what the fuck it was. The fuck was mine.

So there it is. She’s owning this horrific thing that happened to her when she was a helpless child. And she’s telling the letter writer that he needs to own all the shit in his own life, too:

And the fuck is yours too, WTF. That question does not apply “to everything every day.” It if does, you’re wasting your life….

Ask better questions, sweet pea. The fuck is your life. Answer it 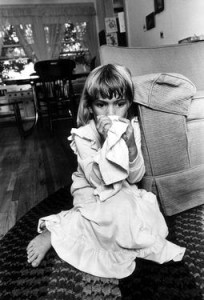 So many things about Strayed’s words are helping me today. Most of all, to have someone describe the damage caused by this type of abuse validates my own suffering. There have actually been people (men) who have said to me, after hearing my story, things like, “Well, at least he didn’t rape you.” As though there are degrees of sexual abuse and incest. And yes, there are worst terrors than being forced to give your grandfather hand jobs—physically, at least. But the emotional and psychological damage stays with you for a lifetime. Strayed gets that. But she doesn’t sugar-coat her advice.

What Strayed does with the letters she receives is unique, as Steve Almond says in the introduction to Tiny Beautiful Things (TBT):

She absorbs our stories. She lets them inhabit her, and thinks about the stories they evoke from her own life…. Tiny Beautiful Things will endure as a piece of literary art, as will Cheryl’s other books, because they do the essential work of literary art: they make us more human than we were before.

A collection of entries from an advice column can be literary art? In Strayed’s case, I think so. One of the letters in TBT is from Elissa Bassist, who ends up co-authoring an essay that was recently published in the Winter 2013 issue of Creative Nonfiction, “How to Write Like a Mother#^@%*&.” (Bassist was working on her MFA in creative nonfiction at the time.) At one point Strayed says (in her reply to Bassist):

I make my own stories public for the sake of art. A painful experience is not art, but art can be made from painful experiences. Writers are truthtellers. That’s our job. Often that means we need to write about the darkness within.

Writing about the darkness within is what I’ve been doing for about seven years now. Ten published essays. Two unpublished memoirs. And now this novel that I’ve been in labor with for three years and working with an editor on revising. Even at this stage of the game I have doubts: Am I good enough to make the changes she suggests, which will give the book a chance to be extraordinary? Several days last week, my old friend depression tried to crawl back in bed with me. I have to keep kicking him out.

And today, as I face the task of continuing to make that novel the best it can be, I have to believe that I can do it. That I can write like a motherfucker. And I have to bring my whole life to the work. I have to own it.