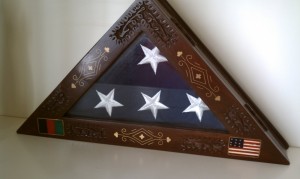 Just over two years ago, I did a blog post about the strange noises coming from the framed flag that our son, Jonathan, brought us from one of his helicopter missions in Afghanistan. It’s a short post, with a video of the frame making the noises:

I had just unpacked from moving into the house we leased here in Harbor Town when I took the video. Shortly thereafter it quit making the noise, and I just forgot about it. It sat on the very top shelf of the built-ins in my office, where I could see it, but not up close. 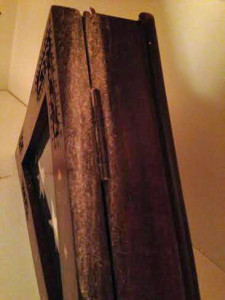 So… fast forward two years and this weekend I was packing up the books and other items on those shelves for our upcoming move on April 5 (to a house we have bought near our current home) and when I got on a step ladder to get the flag and frame down, here’s what I found—piles of very fine dust (like sawdust) all over the shelf and frame, and half of the frame looked like it had been eaten.

In my “Weird But True” post from January of 2012, two friends left comments that I probably should have paid more attention to:

And Bill Stanek said, “Maybe it’s a bug that got embedded in the wood. I think you should call National EnquirerJ”

This article at TermiteControl.com says that termites don’t leave sawdust in their path, but wood-boring beetles do. As they eat the wood, they leave “frass,” a fine, dust-like powder in little piles outside the wood. Just like I found on the shelf by the frame.

I’m totally creeped out! I put the framed flag into a plastic garbage bag and took it out to the garage to get it out of the house. Then I cleaned the shelves where the dust was. There is no damage to the shelves, and I didn’t see any bugs, but I’m too queasy to open the frame. We’re waiting for our son to get back in town. Maybe he will be brave enough to open the frame up and see what’s inside. After all, he did three deployments to the Middle East when he was in the Army!

11 days ‘til moving day, so my posts might be short for a couple of weeks, but please stay tuned! 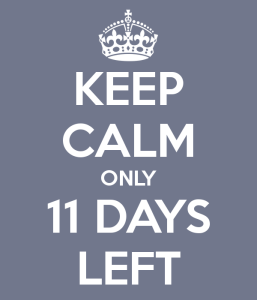