Okay, so I dropped another ball. I’ve tried to keep three of them in the air at the same time since the New Year began—exercise, organize, write—all elements of Operation Order Out of Chaos. If you’ve been following my blog, you already know that I dropped one of them—exercise—early in the race because I got sick. Even while I was sick I kept up the writing and uncluttering/organizing, somehow. (If you’re new to my blog, you can catch up on posts about the organizing progress here.)
But I’m not sick any more, so this past week I started back working out, if only doing the minimum 20 minutes on the elliptical machine 3 times a week. At least I’m there. And the writing is really moving along well, on several fronts, including new chapters of the memoir and more essays being published. But—BAM! What was that? The sound of another ball hitting the floor, and this time it’s the unclutter/organize ball. Yes, it’s been over a week since I’ve done anything in the realm of organization around here, and its starting to bother me—especially the half-finished guest room closet.

Oh, maybe this counts: I did my mother’s income taxes last week. And that involved filing her business mail from the past several months, creating 2009 file folders, making lots of copies, and filling out worksheets for her/our accountant. So, can I let that count for last week’s organizational activity? Please?

And maybe the conversation I had with my husband this week about things we want to do to get our house ready to sell (about a year from now) counts as organizing—renovating the master bathroom, new carpet in the guest room and upstairs rooms, new (or repaired) roof, etc. We’ll get bids soon and get some of this started. So, who has time to actually organize when there’s so much to discuss? Well… here are three sources I’ve found with helpful hints, so if you’re also trying to bring order out of chaos in your home (or work life) check these out:

One-hour home makeover tips
Quick Change Artists
And the Unclutter Blog. That last one, the Unclutter Blog, had a post about organizing your work day that was inspirational. But I think I’m only inspired to sit back and admire this person’s organizational goals. I have to be a little more free-flowing than that. In fact, their schedule kind of scares me. Like what if I’m on a roll with my writing and—DING!—the schedule says it’s time to move on to something else? Or what if I’m waiting on an important email and don’t want to wait until 1 pm or 5 pm for the next scheduled “Check Email” slot? No, I don’t think that one works for me, but hey—to each his own!

Take today—right now—it’s Saturday afternoon at 1 p.m. and the three things on my Saturday Afternoon Schedule are: Grocery Shop, Shop for birthday gift for Goddaughter’s party tomorrow, and cook for tomorrow’s potluck at church. Those three activities will probably take 3-4 hours, so I should begin soon. Now, actually. But… I’m enthralled in (an unpublished) book manuscript a friend just shared with me and I can’t put it down (which is a good thing, for the writer!) and also intrigued by two magazine articles I found the other day and just allowed myself time to read with my coffee this morning. So… I’m thinking I can leave on the errands at 2:30 or 3 and still have time to cook. That way I have time to chat about the magazine articles:

“Facebook is for Old People,” by Lev Grossman, in Time Magazine’s February 23 issue. I 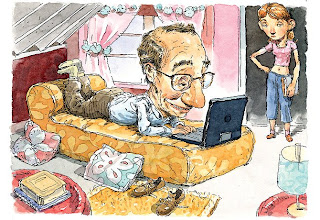 cracked up when I first saw the article, because all three of our kids are on Facebook, but I’ve never even checked it out. And why not? Because it was created by a Harvard student for other college students. And I’m 57 (almost 58) years old, so I think I’m a little too old to go there, you know? (cartoon from Time Magazine.)

Oh, it’s not that I haven’t been invited! Several writing buddies have invited me to be their “friend” on Facebook, and most of them are in their 20s, 30s and 40s, which isn’t quite as weird as fifty-somethings being on there. Like “Mr. Smith” (name has been changed to protect the innocent.) Here’s how I found out: our daughter was living at home last summer, and one day she said, “Hey, Mom. Mr. Smith invited me to be his friend on Facebook.”

“Mr. Smith? You mean George Smith?” (remember the name has been changed, but this is someone I know well.)

“Yeah. I didn’t know what to say. I mean, I’m not sure I want him reading my stuff, and like, why is he on there?”

So I ask Mr. Smith what the deal is and he claims he’s on there to “keep an eye on his kids’ Facebook pages.”

“And how does asking my 26-year-old daughter to be your ‘friend’ help you do that?”

You know what, I don’t want to see my kids’ Facebook pages. I know, they are 26, 27 and 31 and maybe I’d feel differently if they were 15 or so, but then we’d have that whole war over why 15-year-olds are on something created for college kids? I just wish that Mark Zuckerberg and his smart buddies had fixed it so you had to have some sort of i.d. to get in, that shows you’re between the ages of 17 and 30, or so. But that’s just me. According to Grossman’s article, it turns out Zuckerberg and company need old people on there to “fulfill its ultimate destiny.” If I was a twenty-something on Facebook and saw it being taken over by my parents and their friends, I think I’d want to go somewhere else. And maybe that’s happening. Grossman says, “There was a time when it was cool to be on Facebook. That time has passed. Facebook now has 150 million members, and its fastest-growing demographic is 30 and up. At this point it’s way cooler not to be on Facebook. We’ve ruined it for good, just like we ruined Twilight and skateboarding.” 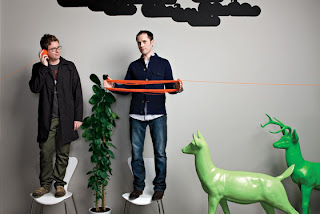 So, where are the cool kids hanging out now? Maybe at Twitter, according to an article by Will Leitch in the February 16 issue of New York Magazine called “The Boys of Twitter.”
(That’s Biz Stone and Evan Williams at Twitter–photo by Hugh Kretschmer for New York Magazine.) The other day my husband asked me what Twitter was, and I wasn’t really able to give him a good answer. But here it is, in Leitch’s article:

“It allows you to post text messages to the web. You have a 140-character limit per posting, and you can “follow” other users … and they can “follow” you. It’s kind of like Facebook’s status updates, but available for anyone to see.”

So, why go there, if Twitter only has about 6 millions users, compared with Facebook’s 150 million? Founded by Stone Williams and Jack Dorsey, Twitter “lowers the bar.” “It’s the logical next step from blogging…. It’s streamlining information.” Williams goes on to say, “I’ve come to really believe that if you make it easier for people to share information, more good thing happen.” And this coming from the man who created the Blogger platform. Yeah, he actually invented the term, “blogger.” But he started Twitter for fun, and now suddenly the media is calling it the “Next Big Thing.” 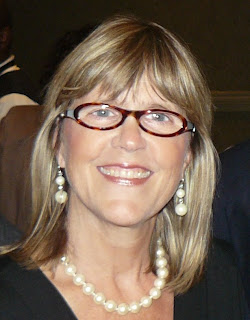 Okay, so I just created my Twitter account and posted my first comments. And my mug shot (at right). Took all of about 10 minutes and now I have six million new friends. I can feel the love. Won’t you join me? It’s much more fun than grocery shopping….

2 thoughts on “>One Hour Home Makeover Leaves Time for Twitter!”