>This past weekend my husband and I were cleaning our 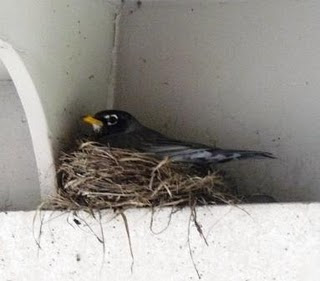 patio and front porch for an outdoor party we were hosting. We finally took down the empty bird’s nest on top of the column by our front door. A lovely family of robins lived there in the spring of 2008, and I was hoping to extend my voyeur experience into the lives of baby birds again in 2009 and this spring. But the nest remained abandoned both springs, with only scraggly twigs and drippings of bird poop left as reminders of its former glory. I wondered if mother birds ever inhabit a “used” nest, so I Googled it and found that harmful bacteria often grow in these abandoned nests, so the removal was a good idea. 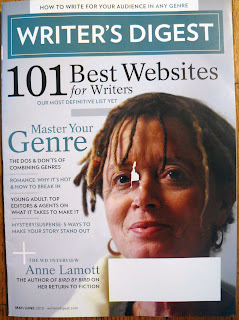 And then I read the new Writer’s Digest interview with one of my favorite authors, Anne Lamott, about her new novel, Imperfect Birds. She’s returning to fiction after years of writing creative nonfiction—especially memoir and essays, two of my favorite genres.

Anne says the title, Imperfect Birds, was inspired by a line from a Rumi poem:

“Each must enter the nest made by the other imperfect birds.”

“… it’s really about how these kind of scraggly, raggedy nests that are our lives are the sanctuary for other peo 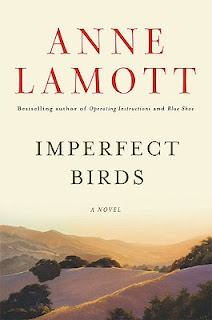 ple to step into, and that if you want to see the divine, you really step into the most absolutely ordinary. When you’re absolutely at your most lost and dejected … where do you go? You go to the nests left by other imperfect birds, you find other people who’ve gone through it. You find the few people you can talk to.”

Earlier in the interview Lamott had said, “I think I have a little bit of a messiah complex in the sense that I really want to share useful information. I want to share stories that I think are valuable and medicinal.”

Her memoirs and essays are all that and more. They are art. They are the standard against which I hold my own creative nonfiction writing, which falls far short, but nevertheless I’m not going to lower the bar. To people who ask me why I write, my answer usually includes bits of both of Lamott’s reasons: I also have a messy but well-worn nest where I hope people can bring their brokenness and feel comforted by mine; and, like Lamott, I want to share “useful information.” That’s part of why I write a blog and publish personal essays and try to be transparent about so many aspects of my life. And I feel affirmed when people leave comments or email or FB message me and say things like, “that’s just how I feel and you expressed it so well,” or “it’s great to read someone who understands my struggle.”

I wasn’t really all that crazy about Lamott’s first two fiction books, but I’m anxious to read Imperfect Birds. I imagine her years of sharing “useful information” through her amazing memoirs and essays have only sharpened her story-telling skills. Fiction is hard to write, as she herself says in the interview. I’m in the process of beginning a fiction novel, and while the task is daunting, it’s also thrilling. My hope and prayer is that I can find the triumph Lamott speaks of in this interview:

Here’s to not-awful novels and messy, nurturing nests. And excellent publications like Writer’s Digest. (By the way, I accidently ripped part of Lamott’s face off the picture on the cover when I was removing the subscription renewal envelope, which was stuck on with some of the glue-gook. Wish they hadn’t put it on her face!)

Every now and then I look through the stacks of publications that arrive in our mailbox and consider which ones I don’t really need. It’s not just for budgetary reasons—it’s also that there’s only so much time for ladies’ magazines (the only one I take is Real Simple) and beautiful regional pubs (like Garden & Gun and Southern Living) and literary magazines (like The Oxford American) and journals (like Creative Nonfiction). And then there are the publications that are important to my craft as a writer, especially Poets & Writers and Writer’s Digest. Today is one of those days where I’m absolutely sure I’m going to renew my Writer’s Digest subscription. The last issue featured another of my favorite writers, Elizabeth Berg, on the cover. That’s 2 for 2. Can’t wait to see the next issue. And the next nest the birds build on my front porch.

“Once You Know Where True Is”

1 thought on “>Recycled Nests: Finding the Divine in Imperfect Lives”